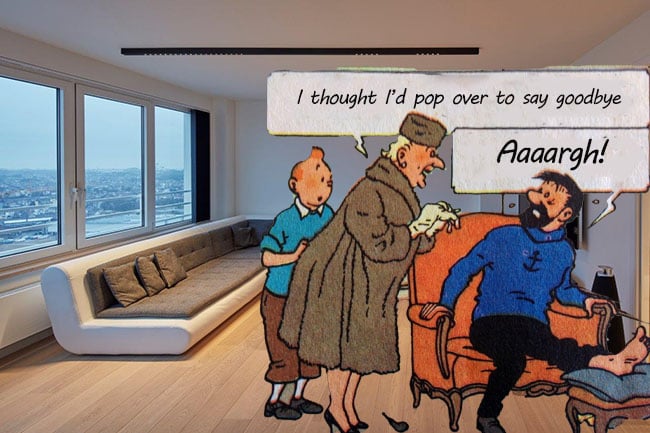 When you WFH specifically to avoid a colleague you despise.

Attempts to resolve a long-running feud between two Baker McKenzie partners have ended with one of the lawyers leaving the firm, putting to bed a story touched on a few years ago, and covered now mainly due to this reporter's affection for Tintin.

Readers with a photographic memory and a keen interest in the goings on of Baker McKenzie's Brussels office, so probably not that many, will recall that Bakers dispatched its General Counsel to Belgium in 2018 to act as peacemaker after simmering tensions between two senior lawyers, nicknamed 'Haddock' and 'Castafiore' by us, boiled over.

Haddock accused Castafiore, who was the head of the pair's practice, of 'moral harassment', a French term describing workplace bullying. The office became so intolerable that in 2017, years ahead of the rest of the profession, Haddock stopped coming in altogether, and has worked exclusively from home ever since. (A source close to the firm said that dislike of Castafiore was not the only reason for that move.)

After the GC's intervention, Castafiore stepped down from management duties and was replaced as department head by Haddock. But musical chairs doesn't appear to have brought peace to the team, and now, "after four years of arguments and threats", Castafiore is off, said an insider.

Luckily the department looks set to remain as charmingly dysfunctional as ever. Because Haddock hasn’t set foot in the office for years, newer associates have never seen the elusive partner and speculate whether their department head really exists - or if Baker McKenzie "has invented a new kind of chatbox to make them work harder".

Bakers, which probably deserves a break after the last fortnight, said, "We do not comment on internal personnel matters". Snowy understands.

Love this Jamie. Now this is quality journalism. I'd like to have more news explained to me with Tintin references.

'Ruthless', 'woke', 'fantastic': lawyers spill on their firm's culture
Is yours 'a dead body'?