Skip to main content
Covid19 - conspiracy theory of the week

I met up with a chum last week who advises COBRA, international corporates, governments and the like. He said that there was a conspiracy theory doing the rounds that Covid19 was created by the Chinese government in a bid to quell protests in Hong Kong. The thing is extremely contagious but has a relatively low mortality rate. It originated in Wuhan, home to China's only biosafety level four laboratory, the Wuhan Institute of Virology, which routinely handles viruses such as Ebola.

I'm not the sort of person who sleeps in a Faraday cage and wears tinfoil hats, but it seems credible to me. Although the chances of the Chinese government copping to it, given that they kept it under wraps for months and threatened to lock up the poor (now deceased) doctor who realised what was going on, must be somewhere between zero and bugger all.

Who knows how it will all play out? The British government has failed to give any useful advice other than keep calm, carry on and wash your hands to the national anthem. Should we still attend conferences, theatres, children's birthday parties, sporting events? City firms have been commendably decisive in taking their own decisions - Slaughter and May is typical with its prohibition on gatherings of more than 25 people and non-critical business travel. For now smaller meetings are still going ahead, but with awkward elbow bumps and bowing. The City is weirdly quiet, those who can work remotely are doing so. You're more likely to see a unicorn trotting down Fleet Street than score a bottle of hand sanitiser at Boots. Loo roll is being rationed. Stocks of pasta are running low. And people are taking fairly extreme measures to protect themselves. This was snapped by a friend at Auckland airport (NZ confirmed corona cases - five) of a passenger checking in on a flight to San Francisco. Imagine sitting next to him for 12 hours: 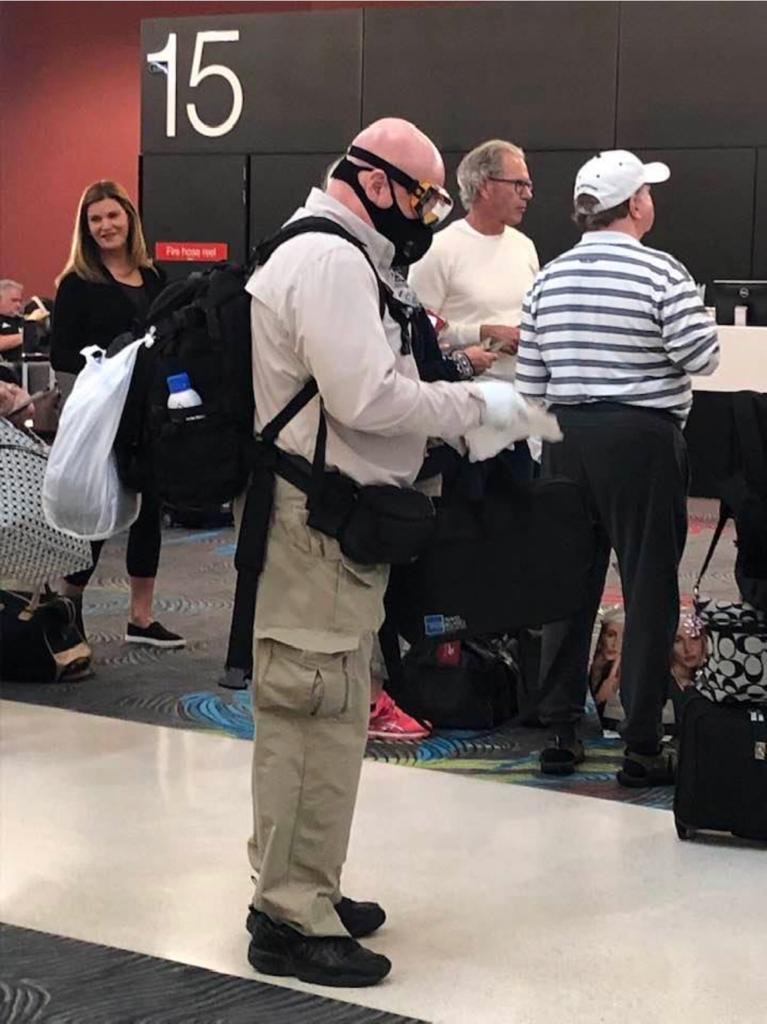 Taking precautions against coronavirus. Or possibly a Ghostbuster.

Maybe Bojo's right and we do just need a bit of blitz spirit. A lady I spoke to this morning said that she's not fussed - she's Polish and survived Chernobyl, as far as she's concerned Covid19 is a walk in the park. And I am wrapping this up for a lunch appointment at a restaurant that normally has a massive waiting list but spookily enough managed to fit me in at three hours' notice. It's an ill wind...

It does sound a bit tinfoil hat to me. China has tried to bully Hong Kong and there is a lot of sympathy for HK hence why people will buy into this theory. But China wants control over HK not to damage it. It would have been counter-productive for China to unleash a virus in HK, especially with the economic connections and ties between HK and China, as well as the border and proximity risking a spill into mainland China.

A more likely conspiracy theory doing the rounds is that the virus was released by the US because of the trade wars with China. That would make more sense when you think of the damage it has done and will do to China economically. It would also explain why Trump has been trying to downplay the virus as the guilt sets in about what he's done.

Actually I wonder if he (rather fittingly) looks like a plague doctor:

I'm with Argo on this one. It makes no sense for China to spread a virus in Hong Kong especially as the Chinese government stress that Hong Kong is a special administrative region of China (much to the protestations of many in Hong Kong who see themselves as different to China in so many ways including politics, culture etc).

If we are putting on a tin hat, the US theory seems much more plausible .. Wilbur Ross the US commerce secretary said himself that the coronavirus was good for US business.

Sounds like the plot of horror film The Crazies.

Plausible but I don't think so - create a highly contagious virus with the intention of deploying it upon the citizens of a region with which the rest of your country shares a sizeable land border (and where there are thousands of crossings every day)?

Particularly as viruses have a nasty habit of mutating in unexpected ways (though this does not seem to have happened materially so far with the coronavirus).

Awareness of the law of unintended consequences would make it unlikely. Plus if the secret ever got out (e.g. a whistleblower with credible evidence), notwithstanding the work of the Great Firewall, the people might ultimately bring down the autocrats in Beijing.

Agree with Argo. It is perfect timing for Trump getting re-elected as well, as coronavirus plays into the republicans arguments to have control of borders, stop globalisation, keep America great with US manufacturing.