Skip to main content
Chocolate Snorting - Just Say No
Last week I threw a fabulous dinner party. As my guests polished off their spaghetti 'n carrot, one of them pulled out a large book: 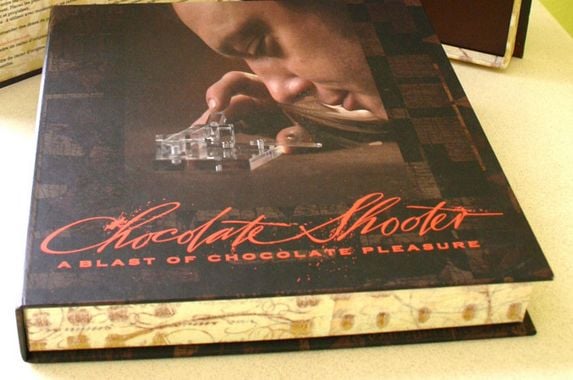 According to articles about snorting chocolate which appeared earlier this year, it is "a bizarre new trend in certain circles". None of the articles managed to identify any of the certain circles, but they did namecheck Chocolate Shooter, brainchild of chocolatier Dominique Persoone. "Recent research has shown how important our nose is to us when tasting food", said Persoone. "Hence the idea of allowing it to enjoy a chocolate tasting event".

Now the time had come to allow my own nose to enjoy a chocolate tasting event. And while it would be a simple matter to tap out a line of ground-up chocolate and snort it without any artificial assistance, that's not what Persoone has in mind. He recommends using his Shooter. This is for two reasons. Firstly, it would be difficult to convince even morons to shell out €45 for two tiny cups of dust. Secondly, unaided, the action required to ingest chocolate via the nose is awkwardly similar, i.e. exactly the same, as that required to snort cocaine. And so we have the Shooter, a device which attempts to both justify the exorbitant cost of the chocolate-snorting experience and distance it from its insalubrious Bolivian twin. Certainly, no self-respecting cokehead would be caught dead plonking this on a cistern:

Although it looks like Jonathan Ive's mousetrap, this plastic knick-knack is in fact a catapult for launching doses of chocolate up your nose. In the flesh, it felt as insubstantial as a cracker toy.

Prepping the Shooter required a lot more effort than rolling up a fiver. First, I had to position the pointy end of the short bar underneath the pointy end of the long bar, which is sprung so that it presses down against the base. Next, I had to adjust the width between the two planks with divots in the end so that one sat under each nostril. I couldn't see whether I'd lined them up properly, but my companions assisted by screeching, "Wider, wider". I ladled snorting chocolate into each of the divots. The machine was ready.

I've never snorted cocaine - Daniella Westbrook's misfortunes made an impression on me as deep as the ching on her septum. But I still felt the disgrace of the relapsing addict as I hunkered down over the Shooter. And that's the problem: no amount of tacky gizmos can distract from snorting's deep association with yeyo, toot, chang, mork, teacher's cuff, the rich man's aspirin, tucker, bones, wow talcum. You can introduce as many little siege weapons as you like, the grim spectacle of huffing, blinking, shuddering and going "Aeeuhh" will always look dodgy and feel shameful.

But it was too late now, the jackals were watching for any sign of weakness. Gingerly, I depressed the end of the short bar. The spring-loaded girder rose and, when the short bar slipped past it, snapped back down onto the platform, causing the nasal springboards to propel two clumps of cocoa onto my upper lip and around my nostrils. A small amount went inside. It itched and tasted of itching.

Perhaps I was doing it wrong. A pair of balls sproinging limply into my face sounded too much like the adventures of Chocolate Shooter P.I. to be correct. And the promotional material shows flakes gravitating elegantly into a nasal cavity as if caught in a tractor beam.

But no, even the model couldn't manage it. His impressive column was added in photoshop. That guy is snorting air. Whereas I looked like I'd blown my nose with a shit. As did everyone else who tried it. In the Chocolate Shooter's defence, the humiliation created a party atmosphere. But unless I contract crippling dysphagia, my nose will not be allowed to enjoy another chocolate tasting event.
Category
Feature