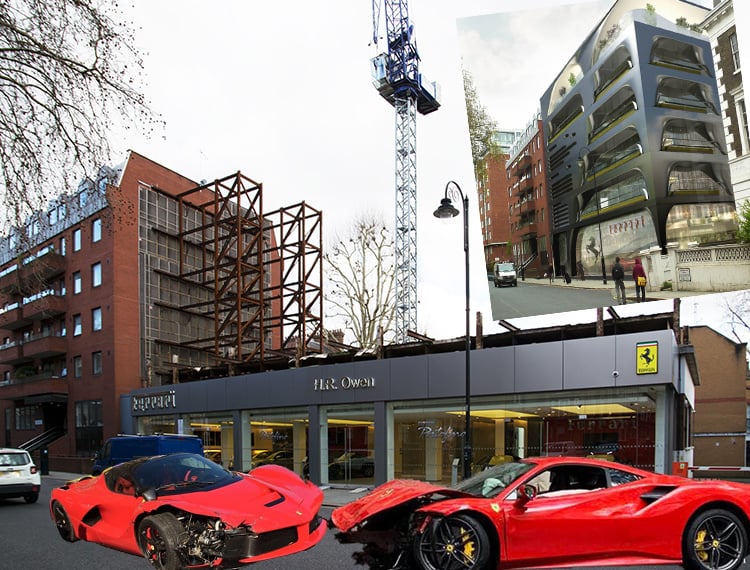 Demolishing above a Ferrari showroom - what could go wrong?

Withers has been ordered to pay more than £250,000 after a litigation partner's "bullish" advice turned out to be three letters shorter.

Glen House Developments LLP ('Glen') instructed Withers to advise on the partial demolition of Glen House, a property in South Kensington which it bought for £28 million.

A Withers associate correctly advised Glen that its plan to knock down all the upper floors could breach the rights of a tenant, HR Owen ('HRO'), which used the ground floor as a Ferrari showroom.

However, Brian D'Arcy Clark, Glen's advisor at Savills, calculated that HRO was only objecting to the demolition as a negotiating tactic to obtain extra compensation, and asked Withers to find a "rottweiler" to "put HRO back in their box".

Withers selected Andrew Wass, a litigation partner, who held a meeting with Glen in which, said the claimant, he unequivocally advised that actually HRO had no right to protest the redevelopment.

D'Arcy Clark was delighted at being told what he wanted to hear, and by Wass's fierce letter to HRO's solicitors. "To me it is a rare occurrence: a legal document that is absolutely on the button, clear and incontrovertible", he told his Savills team. "It also is his actual opinion as well - not just a letter designed to frighten. This might be an easy win - we will find out - but I am impressed by this guy so far".

Doubts began to creep in when HRO applied for an injunction to halt the demolition. Glen asked Wass whether his argument was contradicted by the wording in HRO's lease stating that Glen could carry out works "provided that they do not materially adversely affect" the tenant's use of the property. Wass wrote back that "ultimately it's a matter of construction", which the client complained was "very different from the emphatic position previously advised".

It got worse when the injunction was granted at a hearing where the judge and Glen's barrister agreed that Withers' advice "was wrong...and both sides had to agree that the lease actually did the opposite".

It argued that Glen would have pursued a more constructive course of action with HRO if not for Wass's advice, and that huge losses were incurred because building work was delayed, new financing was required, and the half-developed property had to be sold at a discount when investors pulled the plug.

Wass conceded in court that his advice had been "bullish", and although the firm argued in court that he raised caveats in the meeting with Glen, the judge preferred the claimant's contention that his advice was provided without qualification. Withers' position was weakened by the fact that no-one took any notes of the meeting, which was "surprising and contrary to reasonable professional practice", said the judge.

However, he also found that Glen would have started knocking down the building whatever Withers advised, and that Wass's imprimatur was only ever regarded as a bonus.

As a result, Withers was held liable for a fraction of the claimed losses, comprising £33k for delays caused by the injunction, and £236k associated with the costs of hashing out a settlement agreement with HRO.

In a statement, Withers said, "We regret that these matters reached trial despite our efforts to resolve them to everyone's satisfaction, but we are nevertheless pleased that the great majority of the claims failed. Given that there is a possibility of appeals it would not be appropriate for us to make any further comment at this stage".

There is an interesting section in the judgment about it being improper for a solicitor to write a letter to the other side and say they have advised their client the other's claim is without merit unless they have actually given that advice.

The judge states that if this statement is not true it is a fraudulent misrepresentation (or deceit?) (para 79(ii)(a)).

Based on some of the letters I get there is either a lot of bad advice out there or a lot of solicitors really going out on a limb for their clients...

All I can say is that those who know Andrew Wass, know him to be a thoroughly affable, charming and delightful chap whos handled some huge disputes (suing RBS).

The advice was to find a "Rottweiler". These are famous for going for limbs, not so much for their intellect.

"Ultimately it's a matter of construction" is now going to be my go-to phrase.

I am ditching: "That would be an ecumenical matter."

I doubt it - she’s the same associate who screwed up by relying on PLC in the other Withers story this week. Win some, lose some.

Andrew Wass is one of the most popular people at Withers. Happy to converse with everyone and totally respected throughout the firm. Anyone who doesn’t make a mistake in life/work must be very dull.

A shame we get the name of the one who naused it up, but not the one who got it right, and deserves a bit of kudos for standing up to a difficult client.  I hope they were not "managed out" for doing the right rather than the most-work thing.

Quite liking how the “client was going to do WTF they liked anyway” defence seems to have stood up.

This seems to be an extraordinarily dull incident involving two companies having an argument over a lease on a small commercial property.

Yes, but he's trying to make himself sound and feel like a big-shot for a brief and flickering moment, so if you could just ignore inconvenient facts like that it would really help him.

I'm not sure my interest in reading in detail about a tiresome commercial argument is increased by its financial value to the participants, neither of whom is me.

Sloppy lawyering coated in hubris!  Deduct the 250k cost from this year's bonus!