Skip to main content
UK Firm of the Year 2014: Toilets
The RollOnFriday Firm of the Year 2014's most important category is, of course, toilets. Which firms have water closets where lawyers can unwind and read their phones, and where is a trip to the lav a bowels-loosening lottery?

No need for brown trousers at Browne Jacobson, a fitting winner which has triumphed at toilets with a stunning 91% score. Stephenson Harwood, which has floundered in other categories, comes second with a super 90%. Shearman & Sterling and Burges Salmon share the third place cubicle with fragrant 89% scores, although "someone crucifies the mens' toilets on the second floor every morning", says one BS lawyer. The Burges Salmon loos' "nice and modern" design also means "crocodile slides down the bowl are inevitable", and the "very stylish tap" drops "straight into the edge of the plug-hole, causing ferocious crotch-level splashback". There is no such messy despair at Shoosmiths' Brummie office, which has "amazing toilets". They are, improbably, "the talk of the town".


Meanwhile, Parabis can be found resting with its Golden Turd on the bottom of the pan with 41%. One unhappy crapper complains of "frequent emails" warning that "someone has created rather a large mess in the ladies' toilets". Mishcon comes second last with 44%, and Nabarro shits the bed with 46%. A Nabarro lawyer calls its lavs "inexcusably basic, like public toilets". "They aren't heated," says another, "so in winter you literally freeze your arse off". A third regrets the absence of floor-to-ceiling cubicles, which lead to "the dubious joy of getting regularly acquainted with senior partners' cacophonous stress-induced IBS. Truly hideous". 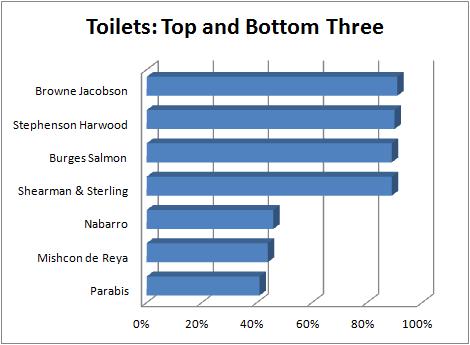 There is distressing news from Irwin Mitchell (67%), where toilet seats were "hanging off or completely detached for a month", says one lawyer, resulting in "at least two people sliding off the pot mid-crap!" Nasty. Plus, claims another, "I can blow more air out of my ass than comes out of the hand dryers".

Unpleasant scenes at Field Fisher Waterhouse (71%), too, where loos "get blocked as a matter of routine and not just after the partners conference". There has "been poo, yes actual faeces, on the wall of a cubicle for about 9 months now". Clyde & Co (75%) is also creaking under the volume, with one lawyer explaining, "I scored a 'very poor' for the firm's loos because in the words of the facilities manager, 'The toilet pans are struggling to cope with larger and/or frequent deposits'."

Work loos are a social etiquette minefield, but Hogan Lovells (76%) isn't making it easy. The doors "do not have red or green displays to show if the toilets are engaged", says one desperate lawyer, "so you forever end up trying to open doors into locked loos". Etiquette comes a distant second to business at Freshfields, where "some partners in my team give you work whilst holding their little bishop in the urinals". But spare a thought for Norton Rose Fulbright lawyers, who say they have "toilets that shriek". There's "a foghorn every time you flush".
Tip Off ROF