Skip to main content
UK Firm of the Year 2014: Diversity
The RollOnFriday Firm of the Year 2014 survey asked lawyers to rate their workplace for diversity. So which firms are firmly in the closet, which are all-white enclaves and which retire for cigars while the ladies wash up?

Firm of the Year Latham & Watkins scores a whopping 94% for diversity, although all the respondents comment on is the "money money money". The reality may be more like Kirkland & Ellis, where one lawyer says the family-friendly policy is "pretty straightforward: we pay you enough so you can have a nanny/send them to boarding school". Second-placed Baker & McKenzie (93%) "stand by what they say", says one lawyer. The firm has a "genuine commitment to diversity displayed at the highest level", says another. It was one of two law firms to appear in Stonewall's top 20 LGBT-friendly workplaces this year.

Field Fisher Waterhouse comes joint second in the diversity category. Its new man at the top, MP Michael Chissick, is openly gay, and dozens of staff credit him for making the place more equality-minded. But a female lawyer says that although FFW "may be a fine place for gay men", working mothers are "something of an endangered species around here".


Firms all over the rankings attract criticism for their inability to solve the mystery of the disappearing women. A Norton Rose Fulbright lawyer says, "for all the talk about equality and diversity, there continues to be an obvious divide in mid to senior positions between men and women". At Hogan Lovells, "more and more people are being given the chance to work part time", says one lawyer, but "it's still a career-limiting move". As a Nabarro mum who puts in over 2,300 billable hours per year puts it, "very few of my kind seem to last long in this firm", and her tally "might explain why". 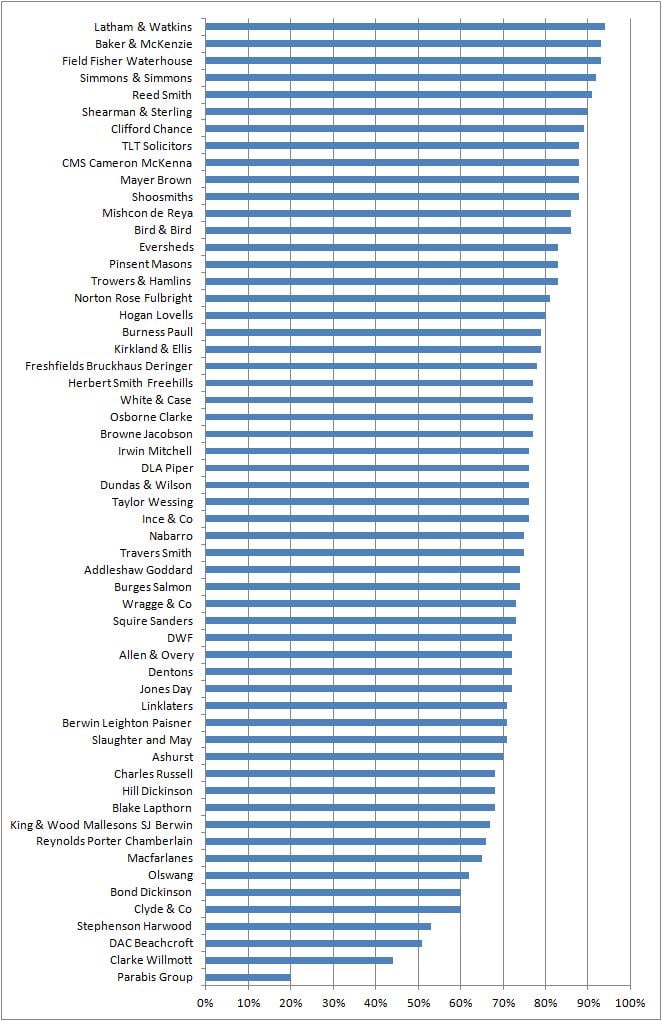 Golden Turd winner Parabis craps out with a truly pathetic 20% score, suggesting an environment so undiverse it would discomfit Bernard Manning. Clarke Willmott comes second last with 44%, and DAC Beachcroft is third bottom with 51%. "Female equity partners in London are rarer than an osprey over the Thames", complains one DAC lawyer. A lawyer at Freshfields says there are a "lack of senior role models" who are women, another at Herbert Smith Freehills says it has very few "realistic" female role models, and the complaint is common across the surveyed firms. However one Travers Smith lawyer mounts a defence for their firm, which made headlines last year for its treatment of a pregnant trainee. The story was "grossly overplayed in the press", they say, and was "not reflective of a firm that has made up a partner whilst pregnant and boasts some of the best working mums in the City".

The word is quieter on BME lawyers, possibly because there are so few. Linklaters is called "gay-friendly" but also "very, very, very poor on diversity re black associates", with "only one black trainee taken on last year". There is "only one BME partner" at RPC, says a senior associate. And while Eversheds scores very decently for diversity, one lawyer claims the ethnic minorities "are largely to be found working in the canteen".
Tip Off ROF

As part of out on-going commitment to diversity, leading law firm Lagos & Lagos LLP has agreed to employ it's first female staff member. In an innovative move Gen. Lawrence Baringa announced the intention to hire a female for a new role (cleaning assistant and head of female pastoral care) before 2020.

Reporters are asked not to mention a previous press release with the same heading from 2009 which was, of course, an April Fool's day joke.
18
Vote up!
19
Vote down!
Are we all still banging on about diversity? Clearly I missed a memo. I demand all female, all BEM shortlists for all positions NOW!
17
Vote up!
15
Vote down!
It is precisely the sort of ridiculous comment above which explains why the profession is seemingly unable to address this issue properly. Gimp.
19
Vote up!
17
Vote down!
My line manager is a black female equity partner, I don't agree that the profession is inherently racist and I think this push for "diversity" encourages quotas which is wrong - the hire, promotion etc of staff should be merit based. Does a black trainee really want to be hired on the basis that it will tick a diversity box?
16
Vote up!
19
Vote down!
Diversity is clearly important and so whether diversity of trainees is taken into account? There's an imbalance in the large proportion of female trainees and if trainees are not 50/50 male/female then it follows something must be done, in the same something must be done about percentage of female partners.
18
Vote up!
20
Vote down!
I work at Eversheds. Lawyers are mostly white. If you see a black person in the office you can be sure they are a cleaner.
18
Vote up!
18
Vote down!
I was an employee in the Parabis Group until last year and am VERY surprised to see the firm in last place. A huge percentage of the managers and Partners are women, the managing Partners of the Northern offices are women and most of the fee earners are women. They are plenty of ethnic minorities in the Leeds office which reflects the local population. I can't really comment about the offices in the south, but would be surprised if it was totally different.
18
Vote up!
19
Vote down!
It is a joke that Parabis are bottom. Smacks of a hatchet job. It is a very diverse firm. Women virtually run the place.
18
Vote up!
21
Vote down!