Skip to main content
UK Firm of the Year 2014: Biscuits, parties and pro bono
Law isn't all working for the man, and the RollOnFriday Firm of the Year 2014 survey also asked lawyers to rate their satisfaction with their firm's social life, biscuits and, for the first time, its pro bono efforts.

Wragge & Co has traditionally dominated the all-important biscuit category, and reclaims the top spot this year after slipping to fifth in 2013. What got taste buds singing again? "Mars Bar cakes. End of." Wragges shares top spot with Shearman & Sterling, where an expanding associate says the offerings may be great but, "at nearly 200 calories per biscuit, their excellence can have a detrimental effect".

Clifford Chance moves up from third place in 2013 to second this year, with "exceptional" snacks which "would put Prince Charles and his Duchy out of business". And Osborne Clarke takes bronze with its "amazing" homemade biscuits. Though lawyers agree the London ones "need to be like those in Bristol". 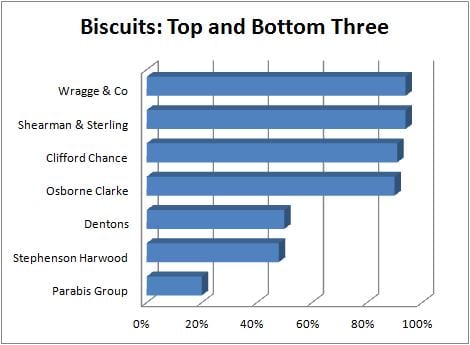 Scooping up stale crumbs off the floor are Dentons (50%), Stephenson Harwood (48%) and Golden Turd winner Parabis, which comes last. It got just 20% for its biscuits, which rather suggests there aren't any.

Firm of the Year winner Latham & Watkins takes top spot for pro bono, thanks to the fact that hours spent on charidee work count towards billing targets (and possibly also because its lawyers can each subsidise the Royal Opera House without putting a dent in their pay). Clifford Chance, CMS Cameron McKenna and Field Fisher Waterhouse all come joint second with 93%. CC lawyers praise its grand-sounding CSR campaign to "help 100,000 people within a couple of years", with one NQ confessing "I went in expecting the worst, and have been surprised by how humane CC is". 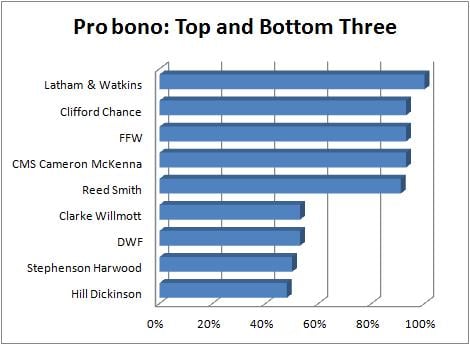 Meanwhile, Bob Cracthit can be seen getting booted all around the carpark at "bleak" Hill Dickinson, which staff rate the worst for pro bono (48%). Stephenson Harwood, "run by bean counters" comes second last (50%), with DWF rounding out the miserly trio with 53%.

Which firms party into the early hours on the partners' credit cards, and which send lawyers packing after a day of silent toil? Bird & Bird comes first with an extremely chummy 95%, praised by staff as "good fun" and a "great place to work". CMS takes second thanks to its "great social side". If only, says a colleague, the "older generation of partners picked up some social skills" from the "nicest doormen in the City". Jones Day comes third. "Very sociable" says one lawyer. Staff "know how to have a laugh" and "everyone likes a drink". Morning shots all round. 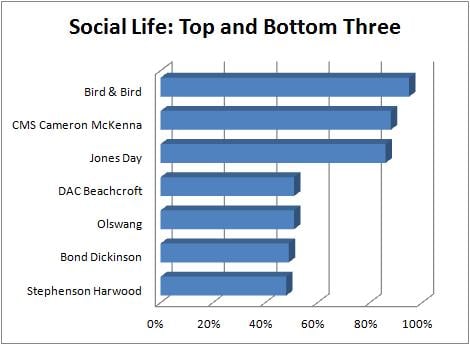 It's a different story at Stephenson Harwood. The Billy No Mates of the party scores a lonely 48% for its social life. "Not a happy place", says one lawyer. "Petty cutbacks by management" are to blame, says another. A friendly atmosphere isn't fostered by "security guards loitering everywhere", suggests a third.

Lawyers at Bond Dickinson rate it the second worst firm for social life. One warns, "don't get me started". Why? "It'll just end with me sobbing about my life. I can't wait to leave". Olswang and DAC Beachcroft make awkward smalltalk together in equal third last place, with one Olswang lawyer saying good times are hindered by a "nasty competitive atmosphere fostered between the associates". Apparently meedja firm Olswang has the "ambience of a trendy but disciplinarian boarding school".
Tip Off ROF

Hi, speaking as someone involved in CSR at Hill Dickinson's Manchester office I would like to say that a fair amount of pro bono work is done out of this office. We are one of only two law firms in the country making a financial contribution to the free Legal Advice Centre at Manchester University (the other being a Magic Circle firm) and send several solicitors a term to give free advice to the public. We also support other pro bono initiatives including mentoring and free advice to not for profit organisations - so we are disappointed to finish bottom!
2
Vote up!
2
Vote down!
The parabis biscuits are rarely seen but that's the point. The reception areas are also small. There are no overheads that are meaningless. That's how you make money these days.
1
Vote up!
2
Vote down!
Bond Dickinson commenters:-