A solicitor has been fined £5,000 by the Solicitors Disciplinary Tribunal for using "colourful" language which included emailing a client to call him a "DISGUSTING PIECE OF SHIT".

Tim Bennett, who ran an offshore advice firm called the Belgrave Group, was initially reported to The Society of Trusts and Estate Practitioners (STEP) by his client, 'MP', after MP became concerned that Bennett had not provided him with a statement of account in respect of funds he had instructed Bennett to distribute.

Bennett's subsequent emails to MP, MP's partner 'MA' and STEP employees were "quite extraordinary", said the then-CEO of STEP, George Hodgson. They contained "wholly inappropriate and insensitive" language, he told the tribunal, and comprised "conduct we consider to amount to bullying".

Your timing is right off, coming right before the holidays.

Please note that I don't propose to stand trial at the behest of a crazy man, and you shouldn't allow nutters to subvert the Code of Conduct."

Emailing Manuel and Hodgson on 5 January 2016, Bennett wrote "[MP] is a total asshole", and claimed "you clearly believe there is a fire just because an unstable bipolar nutter says he smells smoke". 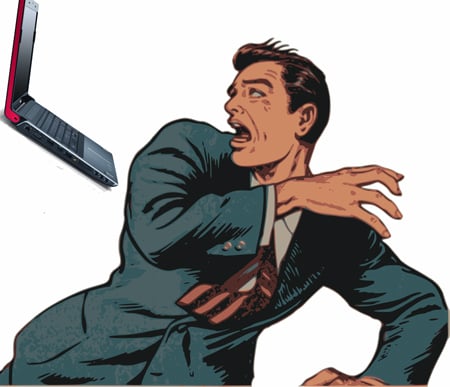 Bennett then began sending disturbing emails directly to his former client.  "You appear to have a death wish", he wrote on 20 January. Later that day he emailed MP again:

"Now I know you are a crazy man with a death wish.
You go out of your way to kick me harder and stir shit for me with [N] in Jersey. Why???.....
You have to agree to an apology and formal withdrawal of your complaint to STEP, otherwise this stops right here..."

Three days later Bennett emailed MA and MP, this time to marvel at the blindness of love:

"I feel sorry for you being associated with [MP]. What on earth drew you to him?

He cannot control what he says or writes.

You need to give some thought as to where your Partner is steering his latest manic attrition as it is now in danger of rebounding and consuming him, you and [E].

How on earth you put up with his mania is beyond me...."

On 31 January at three in the morning, Bennett dashed off a climactic allcaps special to Manuel, MP and MA:

YOU ARE THE ASSHOLE THAT TRIGGERS ALL OF THE COMPLAINTS...

BUT UNFORTUNATELY FOR ALL WHO COME INTO YOUR ORBIT, YOU ARE ALSO A DISHONEST AND DISGUSTING PIECE OF SHIT...

... BUT OOPS I FORGOT - YOU ARE A MANIC DEPRESSIVE WITH MOOD SWINGS AND NO REAL GRASP OF REALITY...

...SO ENJOY YOUR WORLD OF INSANITY"

Bennett finished off in February with an email to the Hong Kong Monetary Authority, copying in MP, in which he summoned his inner physician:

[MP] is a certifiable nutcase on strong medication for Bipolar Mood Disorder. Most of what he says is made up of garbled rubbish, emanating from the sewer that resides in his brain...

Declining to appear at the hearing, Bennett accepted that his conduct failed to protect the reputation of the profession. In a letter to the SRA he said he was "deeply embarrassed by this" and apologised. But he maintained that STEP and the SRA were "seemingly taking the side of a criminal money launderer", adding, "I certainly do not poke fun at people with mental illness and I don't understand how that conclusion can have been drawn".

The SDT said that other correspondence between the pair suggested Bennett's relationship with MP went beyond the professional and once constituted a friendship. Quoting one email in which Bennett told MP, "Despite you being a cantankerous bastard, I enjoy your company and intellect!" the tribunal commented that it "indicated their friendship was somewhat unusual". But a bromance turning "toxic" was "no excuse for the appalling language". The tribunal imposed costs of £8,000 and fined Bennett £5,000, citing the limited period over which the emails were sent and the low risk of repetition.

Lesson for readers seeking to avoid getting struck off: DO call clients disgusting pieces of s**t. DON'T call the SRA "f**ing bent c***s".

I just did a google image search of Bennett. He looks like a right pillock. Ludicrous dye job, worse than Silvio berlusconi.

This guy sounds like he's a regular on your discussion board.