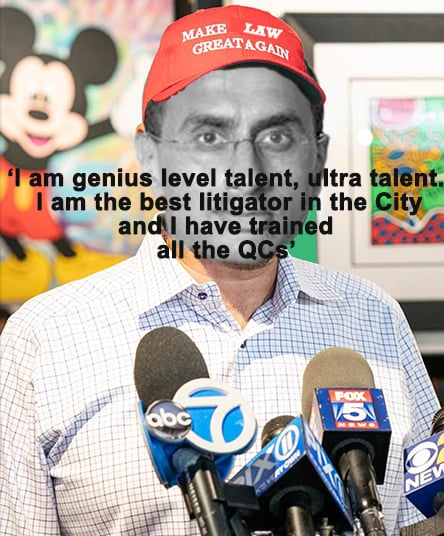 The deep state got him.

A lawyer who boasted that he was a "genius level litigator" who would "end the SRA" failed to make good on his threat and has been struck off instead.

Anjan Patel, a litigator at Neumans LLP, attracted the regulator's attention when he settled a claim without telling his client in 2013.

Patel and 'Client A' agreed to accept £2.2m to settle the client's damages claim. It was also agreed that the firm and Client A would split however much the other side agreed to pay in costs. Despite being explicitly informed that the client wanted to be involved in the costs settlement "at every level", Patel quietly made an offer to settle the costs for £2.3m, which was accepted by the other side.

Patel managed not to disclose the fact of the settlement to the client for weeks, ignoring the advice of a go-between and counsel that his approach risked regulatory peril.

When Client A found out and the SRA duly demanded an explanation, Patel told it in 2019 that his client had demonstrated “extremely bad judgment” and “greed” in relation to previous offers. He said that he had been forced to take “all steps in the costs dispute" to protect the client and others from Client A's "greed and awful judgment”.

Patel called to speak to the SRA officer investigating him and informed him, “Your career was going up and now you are about to get smashed". He said that if he didn't get a time extension to respond to the SRA's allegations, "I will tell the Head of the SRA, the Head of the Law Society, the Lord Chancellor and the Prime Minister”.

Patel said that if he wasn't treated "humanely" by the officer, then "I will make sure your contract is terminated”.

“You will get sued. I will sue you for misfeasance. I have unlimited resources and talent and I will sue you”, continued Patel, threatening, “I will end the SRA”.

“Let’s get one thing straight, I control the outcomes here”, claimed the lawyer, inaccurately as it turned out.

When the officer agreed to the extension, Patel emailed back his best Liam Neeson in Taken:

“I’m not sure you realise. I know you want to make a name for yourself. Good for you. Lying. Misleading a regulator. A court. That’s malicious prosecution. I’m recording my time. I’m billing you personally. You want a fictitious witch hunt? No problem. You’re going to pay for it. You lied to me a few weeks back saying you just started to investigate this. I’ve got you. And now. Systematically. You will come to understand why I’m the best litigator in the City. This is going to end with you in serious trouble...Level false accusations at me and my previous colleagues? There are serious consequences for you”.

The Solicitors Disciplinary Tribunal ruled that the lawyer had "failed to display any insight, foresight or hindsight", and, instead of closing down the SRA, it struck off Patel and ordered him to pay £30k costs.