A lawyer has accused an engineer of assaulting him outside a House of Commons bar, leaving him with "black all over".

Peter Brooksbank, a parliamentary lawyer who assists MPs on scrutinising domestic legislation*, appeared at Southwark Crown Court this week to give evidence against Ronald Freeman, an engineer contractor at Parliament.

The fracas took place on 5 December last year when Brooksbank was drinking at the Sports and Social bar, within the House of Commons. After a few pints Brooksbank headed outside for a cigarette. According to the prosecution, Freeman repeatedly asked Brooksbank why he was sitting on the steps, much to the lawyer's annoyance.

Later that evening at the bar, Freeman allegedly yanked Brooksbank's parliamentary pass off his neck. Brooksbank followed Freeman into an alleyway outside to retrieve his pass when, he claimed, the engineer ran towards him with great speed. As Brooksbank turned to escape he said that he was "shoved from behind" causing his head to hit the paving stones. His next recollection was being helped to his feet by police officers. He was later treated at hospital and given 12-20 stitches to his head. Brooksbank added that the next morning he was horrified to find his face was swollen and "black all over". 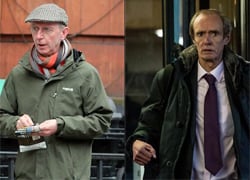 Charlie Falk, for the defence, accused Brooksbank of calling Freeman "a peasant" that evening and repeatedly trumpeting "don't you know who I am, I'm a QC don't you know" as he followed Freeman. Brooksbank denied using both phrases and said that he gets on with people of "all grades and statuses".

The defence rejected Brooksbank's version of events, and said that in the alleyway the lawyer "turned around and punched" Freeman in the face. The defence argued that Freeman was caught by surprise and grabbed Brooksbank to steady himself, causing them both to fall on the floor.

Brooksbank said under cross-examination that he had never punched anyone in his life.

Tags
Not Brexit
Tip Off ROF

Brooksbank certainly does not look like a pub brawler to me. I think it is unlikely he has ever punched anyone.

Lydia, no.  "He's black so he looks the violent type, must have done it" "He's a nice looking man, couldn't possibly be a rapist" - see how this works?  How someone looks to you and your inherent prejudices are of exactly NO value in judging guilt or innocence.

In that picture, he looks terrified half to death at having to give relief to the invisible man.

"Brooksbank denied using both phrases and said that he gets on with people of "all grades and statuses"."

I get on with peasants, honest m'lud. I once invited my groundskeeper into the drawing room for a brandy (the cheap stuff obviously).

Take a break from the keyboard pal.

Lawyers really are ghastly, aren't they? Why does no other profession produce such bumptious thuggery?