Skip to main content
Firm of the Year results: Work/life balance
Bird & Bird has the best work/life balance in the UK as voted by its staff (probably remotely, from a funfair).

When they're required to be in the office, senior associates at 2Birds say management is "genuinely concerned" with ensuring that lawyers benefit from "a social life and some downtime". Another says the firm understands that "if you want the best" from your people "you shouldn't work them to the bone and demand they put in FaceTime until 2am every night". A junior associate promises "I have never worked a weekend. Ever. And no one expects me to".

Clarke Willmott steals into second place, helped along by a partner who says the firm has a "very negative image in the legal Press which isn't justified". And TLT takes third, bouyed by associates who "rarely work past 6.30pm", while Osborne Clarke takes fourth thanks to partners "who 'get it' when you ask if you can leave at 5.30 to get to a concert".


While a Burges Salmon senior associate says "significantly" more hours expected than 5-6 years ago, it's still "nowhere near Magic Circle/US level beasting". A BS trainee adds that "If you work till 9pm for a couple of days", people "get concerned and come in to check on you", which a senior lateral hire says it is "a brilliant dose of normality and humanity after 6 years at a Magic Circle firm".

Contrast that with Firm of the Year Winner Shearman, which scored its worst mark for work/life balance, with an NQ moping that there is "little regard to the concept of having a life". Though 75% is still a good score, and another solicitor says that "although there were late nights at times, I never felt that I had to stay late needlessly". Of course, those in Shearman's corporate department "can expect to work the full 24 hours in a day". 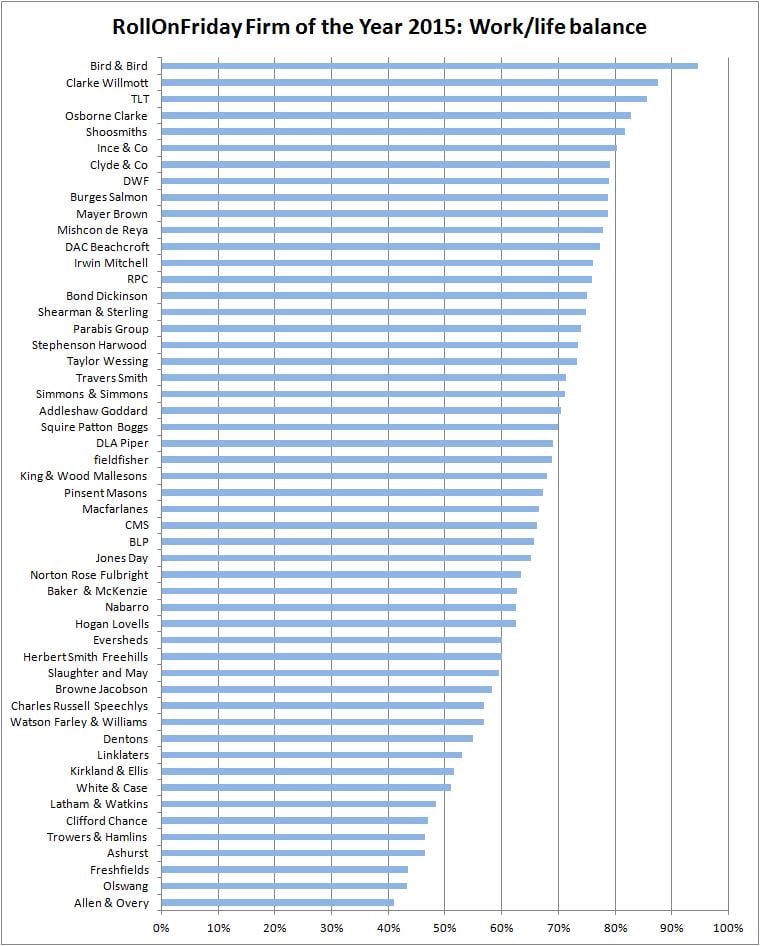 In the bottom half of the table, there's scary news from Linklaters where "you literally get flogged to death" according to one senior associate. She is "pretty sure" she "will be walking down the aisle wearing a conference headset". Another literal-minded Linklaters NQ says people "literally have to sneak out using fire exits/service elevators" if they're leaving before 8.30pm and don't want to get "nasty looks".

Sleep is sometimes an "unwarranted luxury" at Lathams where "a lot of people don't really understand the concept of holidays". The respondent thinks it's "a US thing", though on the bright side, it means "someone will be getting their 3000 hour bonus this Jan!"  Plus, says another senior, "sitting in a stress position at my desk and not being able sleep for literally days on end" means if "I am taken hostage and tortured, I think I'd survive well".

At Clifford Chance, a junior associate say the sole pitfall of late nights at Canary Wharf is that  "the pool closes at 10pm", while another says there is "no need to sign up for Grindr", because he is "regularly reminded by senior associates how I will be 'bent over' in my next transaction".

Further down the work hard, play work end of the table, "the 6:30 work dump is a regular occurrence" at Trowers, with  Ashurst tying for 70-100 hour weeks which are a "common occurrence".  Luckily "the market is starting to improve" so "expect massive departures of all the 5+PQEs that haven't been managed out already".

Long hours are the price paid for "top quality" work at Magic Cirle firm Freshfields, which came third from bottom with 44%. A not-so-Fresh senior associate says the days he's required to work should be "read out to the tune of 'we didn't start the fire'": "weekends, annual leave, public holidays, Christmas Eve, New Years, engagement, wedding, funeral, bereavement". So tired it doesn't quite scan, he says his point stands that "nothing is off-limits for these wankers".

Olswang came second bottom with 43% for its "terrible" work/life balance. A trainee contends that the swanky brand "still commands respect in the market", but it does have a "crappy" work/life balance where working "at over 200% capacity for weeks on end seems to have become a norm".

Trainees are usually keen to stay on at the Magic Circle firms, though at Allen & Overy once they do, they may never leave. The firm came bottom for work/life balance this year with 41%. One lawyer says the firm has "slipped" from being "the 'friendly' Magic Circle operator" to a "US-style outfit paying low Magic Circle wages and bonuses but asking associates to work around 2000 hours per year". More than one complains that "we're doing more hours than our friends at US firms", which means something when "they take home a lot more. Something needs to change".
Tip Off ROF