Skip to main content
Firm of the Year results: Diversity
RollOnFriday's Firm of the Year 2015 survey reveals that staff feel women and particularly mothers get the rawest deal in the profession.

Mayer Brown took the top spot in the poll of staff satisfaction with its approach to diversity, scoring 96%. Hogan Lovells, whose London Managing Partner Susan Bright was praised as an "honest, open and visible" role model, came second with 93%.

Slaughter and May came top of the Magic Circle, with an NQ vouching that a "very strong" culture of meritocracy means "nobody spends their time thinking about the fact you're a woman, what colour you are" or "how you speak". Though one female associate with young children said that means the firm expects everyone to work as much as everyone else, meaning it's "not at all a family friendly place". 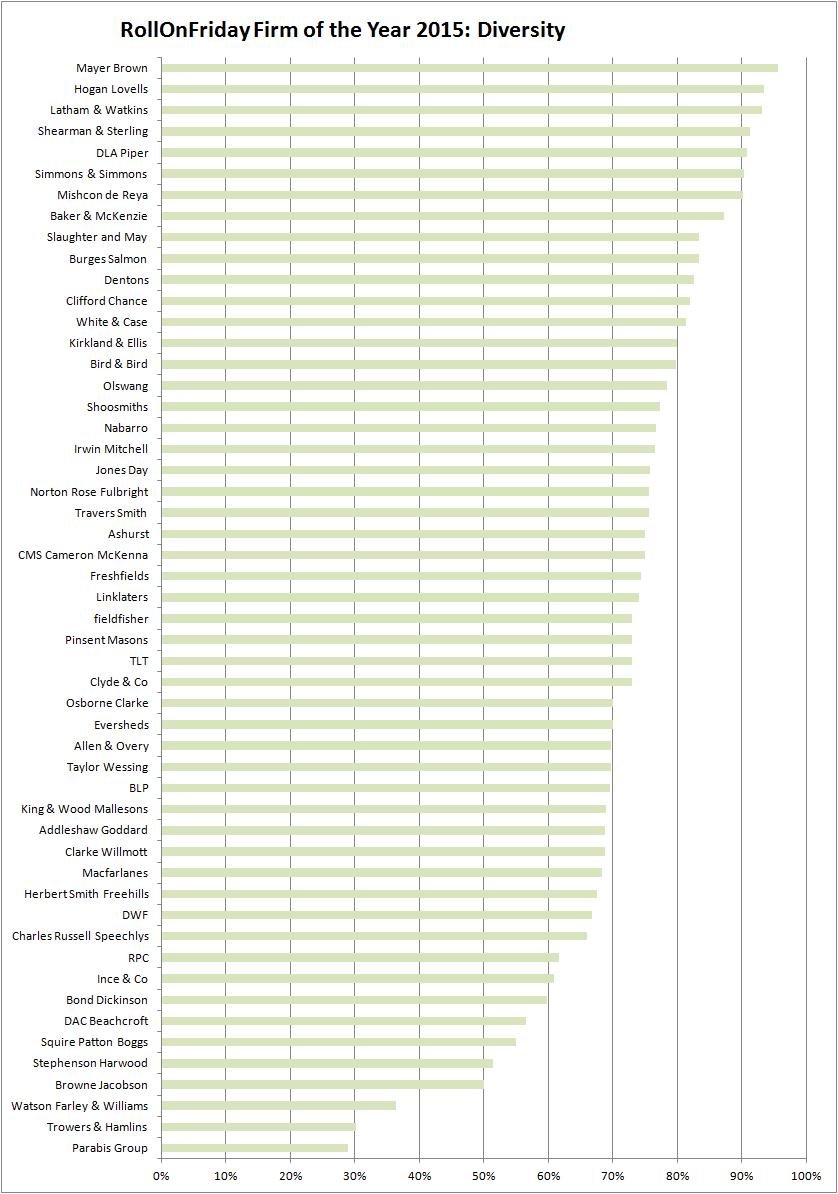 Providing flexibility and a meaningful career path for mothers remains a nightmare for almost all firms, however. While lots of lawyers say progress has been made on flexibility, the question from an associate at Clyde's (a good 73%, and praised for setting up a working parents group) is being asked everywhere: why, "when each intake of trainees is more than 50% women", is the majority promoted to partnership "still men?" At DAC, where associates says there is "no sense that people are scowling at you behind your back if you leave at 5.30 to pick your kid up", a "gender apartheid" still exists in London between the partnership and the rest.

Staff across the market said that while partners "talk a good talk", prospects for females looking to join their ranks remain "woeful". A Herbert Smith Freehills associate says there even seems to be a tendency to pack women returning from maternity leave "straight off on long client secondments", and adds, "we get the hint - the firm suggests that we move in house". And fieldfisher (73%) is slammed for management which one lawyer says seems "very anti-female", with a diversity policy "limited to having an openly gay managing partner", whereas "if you're an ethnic minority or working mother, they don't give a feck". Meanwhile an Ince & Co trainee whom RollOnFriday hopes is paranoid says there is a suspicion that last year's trainee intake comprised one female and eleven males "in response, even if subconsciously, to increased flexible working requests".

Credit is given to firms showing they're serious about their LGBT groups. Clifford Chance's Arcus organisation is "very active" and "well supported". And DWF has a "very keen" LGBT network, though diversity is a fickle mistress/master/non-gendered liege and another staffer says the group "really focuses on gay white men" and "does very little for bis or trans". Freshfields' Halo Champions scheme is heralded as "an amazing initiative that has helped change the firm", though even it can't escape the view that partners are almost all "white, English Oxbridge graduates" who are "slightly creepy to female associates, live in Harpenden" and "like to ski".


In the multicultural stakes, White & Case seems to be most likely to infuriate ukippers. It is "so diverse that it's difficult to find an English person in some departments". Another lawyer says walking down the hallway is like "walking through a multicultural fair" where "you hear at least 2-3 languages spoken at any given point".

At the homogenous end of the table, Watson Farley & Williams has "no commitment at all" to diversity. While many other firms are also "filled with white public school boys", WFW has "no understanding why that may be a problem". And down at the very bottom, the Golden Turd pops up to drink a pint for the cameras, although Trowers is beaten to last place by Parabis, where a trainee's verdict is: "promotion of diversity, well that's 0".
Tip Off ROF

Its all about money, that is the game, it's not about justice, the law, equality or anything else its about the money.

If you want flexible working, with no target, no risks, no consequences, no sharp legal minds, no laughing with your mates about deals and completions get a job in a local authority or stacking dog food. It does n't matter which but the latter is probably more rewarding.
1
Vote up!
2
Vote down!