What could it possibly have done to deserve it? Quite a lot, it seems. "In-fighting and politics, incapable staff, poor systems - do I need to go on?" asks one lawyer. The firm's management scored a rotten 27% and was blasted for providing "appalling support and infrastructure". "Mean to the point of embarassing", agreed one associate. "My floor has 50 fee earners and one white book" and, when staff requested another, "we were told the senior partner would himself have to authorise the expenditure. Three weeks later, a flat refusal".


Parabis also scored poorly for career development, of which there is "absolutely none" according to one lawyer. "No desire amongst staff to promote from within" says a colleague. "If your hours are down, or your face doesn't fit, you will be managed out". The firm also scored just 30% for pay, with associates grumbling that salaries "are low and barely move". As for the working environment, it is "anonymous, like working at Tesco", says one staffer, with "vast rooms filled with rows of desks - a massive claims handling factory, overseen by **** *****". Oh dear.

But it isn't completely nightmarish. Parabis scored reasonably for work/life balance (61%) with several respondents echoing the view that the "hours are easy". Plus there's a "beer budget every month", the London office has "some of the nicest people I've ever worked with", and, erm, "the disabled toilets are nice to cry in". 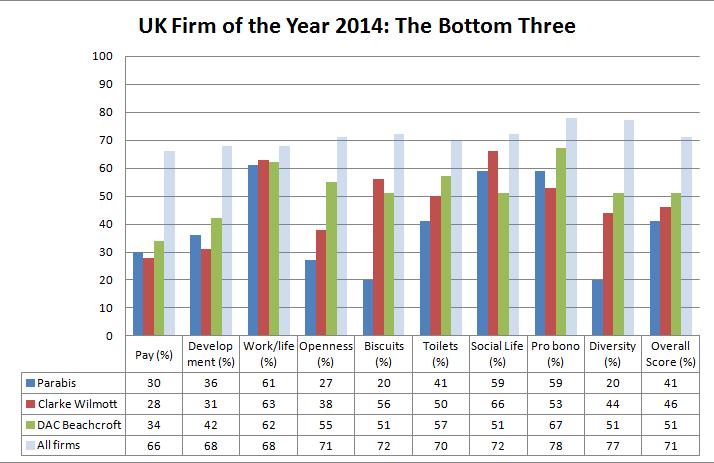 Clarke Willmott came second to last. It was blasted for "dreadful" pay and "infighting and bickering between teams and offices". As for the firm's attempt to start an organised training programme, "the 'CW School of Management' is an embarrassment - partners randomly talk about topics like 'how to record more time' or 'how I poached clients from my former firm'". Mostly, though, Clarke Willmott lawyers talk about their peers leaving "like rats jumping from a sinking ship". That's despite the fact that "we got new pens this year".

Last year DAC Beachcroft came second to last, but this year it's moved up one spot, and at its current trajectory will win RollOnFriday Firm of the Year 2054. It gets credit for engaging in "lots of pro bono for its insurer clients" and for its "great" people. But everything else? Not so much. DAC lawyers describe salaries as "shocking" and "shit" and bonuses as "unattainable". Fee-earners, grumbles one, "would earn more cleaning the files than running them". And despite healthy profits, says another, "we are constantly told that margins are squeezed and so we are unlikely to (ever) get a pay rise".

Judging by the grammar, syntax and tone of the above comments I think that Parabis' staff would do themselves a favour by commenting no more...
135
Vote up!
127
Vote down!
I worked for Parabis a few years ago and to tell you the truth, it was an absolute crap place to work for. The salary is extremely poor and you are timed for every phone call, every letter in fact everything from going to the loo! The people are really nice, but the work moral is low. Poxy bonus that wouldn't cover your fares, management - can't organise a piss up in a brewery. And who the hell keeps going on about beer money. Twat! That place used to really get to me and I'm so glad that I got out - it makes those young people ill. If I won the lottery tomorrow, I would march back in there and tell the management team what a bunch of twats they really are. Taking all the profits that these young people so truly deserve. They work hard and get little in return. Need I go on.... ok I will. The fat cats at the top who are milking all of the profits need to seriously think about their staff as they are the ones that are making them the fat cats that they truly are. FAT AND UGLY PEOPLE! There that's it folks.... If anyone out there DARE want to argue with me, I'm here just waiting....
123
Vote up!
124
Vote down!
Pro bono scored higher than most other categories? Does anybody at Parabis, CW or DAC actually do any pro bono?
122
Vote up!
127
Vote down!
I suspect that most of these adverse postings are from London employees. I have been at Parabis in Liverpool for over two years, and I feel I am well treated.
105
Vote up!
134
Vote down!
The Leeds office is pretty much if your face fits and it certainly is it's not what you know it's who you know! Staff paid peanuts and then when they leave are asked why! Yeah as if they don't know why people leave! If u step out of the office at 5, don't expect to get anywhere fast. Low wage but expected to put the hours in whilst the dragon gets paid £££££££££
125
Vote up!
127
Vote down!
anonymous user
04/02/2014 22:55

I suspect you work at the London or Bristol Greenwoods' office.
127
Vote up!
128
Vote down!
Parabis latest - fund training contracts then offer paralegal salary! Rats are leaving a sinking ship. Can the last person to leave please switch off the lights.
124
Vote up!
129
Vote down!
You're right there. Last person does need to switch the light off. Everyone seems to be jumping ship. Partners all leaving and Leeds office partner walks round with a face on. Real communication problem. Miserable!!!!!!!!!!
121
Vote up!
131
Vote down!
I work for Parabis Ltd and whilst the company has been fair in the time I have worked there, there has recently been a change in the culture. Good staff are not being retained, bonus payments delayed (and significantly reduced compared to recent years), pay review delayed and the communication to staff very poor. The performance of Parabis Ltd has been extremely good for it's clients, in a tough climate...time to reward and develop the staff that have produced these results!
115
Vote up!
130
Vote down!
Incompetent management and limited staff progression.
111
Vote up!
129
Vote down!
The award is deserved. The management are crap, lack of training, no recognition.
119
Vote up!
134
Vote down!
fuzzy!!!
122
Vote up!
129
Vote down!
I am really glad I escaped. I was close to bringing a shotgun in..........
123
Vote up!
135
Vote down!
No pay rises - except for a certain few!!
115
Vote up!
130
Vote down!
Who keeps turning the lights out?
127
Vote up!
124
Vote down!
Simply sadistic.
111
Vote up!
132
Vote down!
I can completely endorse most of these comments.Employees do not feel valued and career development is non existent other than for the ones whose faces fit.I would not recommend working at this firm to my worst enemy.....or maybe I would!!!!!
124
Vote up!
134
Vote down!
if the name fits wear it
120
Vote up!
136
Vote down!
Just keep trampling on the little people "Parabis".............. it is such a sure way to fail ..... just buy up good strong companies chew out and spit out............... would like to say good luck "Parabis".... but what goes around comes around..... and your days are numbered LMFAO
73
Vote up!
74
Vote down!
Shocking that they can get away with treating people as they do in their greedy pursuit of self. No regard for staff welfare. As someone else has said, what goes around comes around. Time will tell.
74
Vote up!
71
Vote down!
In summary, it is an organisation run by sociopaths.
79
Vote up!
76
Vote down!
Parabis is nothing like that
81
Vote up!
74
Vote down!