Skip to main content
Firm of the Year 2018 Work/Life Balance: 80% and above
The top of the work/life balance league was dominated by daylight-hours-only firms, where lawyers knew and recognised the faces of their families and friends. No US firms featured.

Clarke Willmott (94%) took first place with no obligation to "remain chained to the desk". Working "ridiculous" hours was "considered a problem", and "plenty of people take sabbaticals of up to 6 months", said staff. Not just partners, either: "two business support staff have taken them to travel". At BDB (89%), working from home, part-time working and childcare responsibilities were "all appreciated and encouraged" said a senior solicitor. "I work 4 days per week, start and leave early to collect my son and work from home one day a week" said another senior solicitor.

"I'm not working stupid hours and there is no stupid pressure to do so", said a Mills & Reeve (88%) partner. Others agreed: "No-one bats an eyelid if you need to work from home, leave slightly early to get to the kids' nativity or similar", said a senior solicitor. She said, "I also don't get the anxious, stressed feeling I used to get in the City if I had to call in sick". 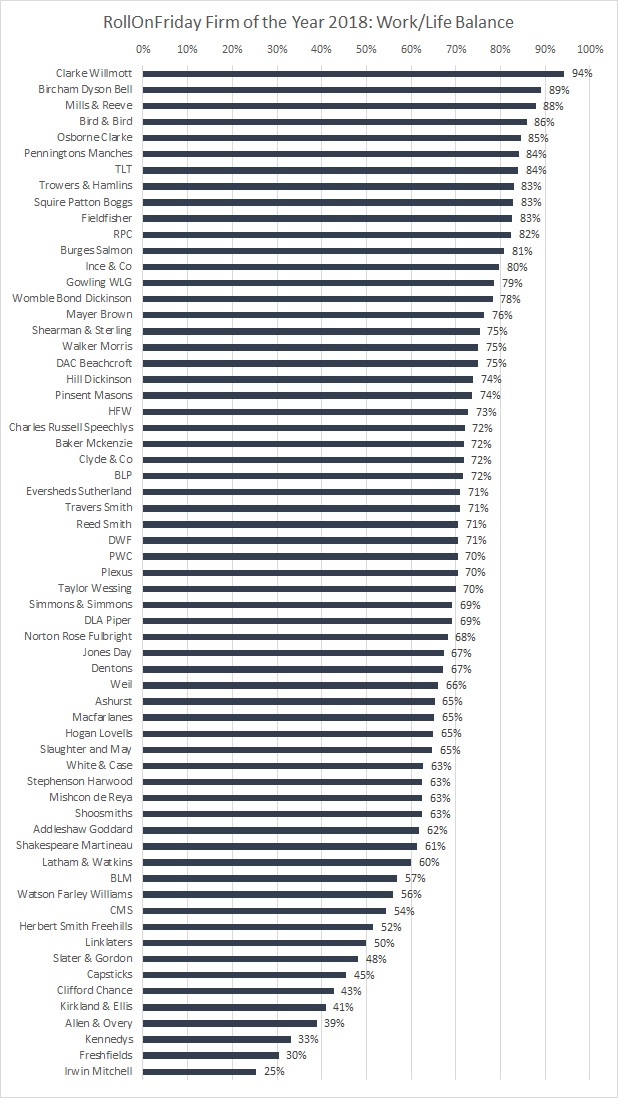 2Birds (85%) had "excellent hours" and, said a trainee, a "healthy approach to working late - when it happens it is acknowledged and appreciated by the relevant partner". Loads of Osborne Clarke (85%) staff said the WLB was "amazing". A partner said it was "the first firm I've been at where, at my annual appraisal, I was told I was working too many hours". A 4PQE said, "I'm still yet to have been in the office late enough to take advantage of the £20 Deliveroo allowance that kicks in after 8pm". Being a corporate lawyer "does mean working hard", said one, "but OC partners lead by example and I would never expect to be at the office unless I really had to be (and then the partner would be here too!)"


Similarly, at TLT (84%) "Contrary to popular belief, there are some hours", said a trainee. But, "hard work is truly appreciated and rewarded by the partners". There was "Genuinely no culture of presenteeism" at Fieldfisher (83%) said a junior solicitor. "However, all-firm parties (Christmas and Summer) are ended promptly at 9pm, ostensibly for health and safety but probably to save on the drinks bill". A senior associate countered, "I don't seem to have a life - flogging away for a prestigious client on a daily fixed rate".

At co-FOTY Burges Salmon (81%), the balance was "Not as bad as my previous firm in London", said a senior associate. "I probably have to miss my child's bedtime twice a week". An associate who needs to sell up said, "Even with a 4-hour round commute my days are better than when I was in the Magic Circle". None of the Magic Circle firms came close to 80%, with Freshfields scoring just 30%.
Tip Off ROF

How is Bristows not mentioned here?! By far the best in the City for work/life balance.
142
Vote up!
139
Vote down!
Some of these firms are at the top of this list for having legit policies and expectations of lawyers having a life. Others are high up because half of their departments don't have the case load to warrant staying past 5:30. This creates large differences that need to be appreciated, like how with over 300 UK lawyers and only ~60-65 million in turnover, Penningtons is still beaten by Bird & Bird with fewer lawyers here in the UK but over 300 million in turnover.

I really think these lists should categorize firms based on their turnover, and then rank them based on their reviews within the bands. It would create a much better picture.
130
Vote up!
142
Vote down!