Skip to main content
Firm of the Year 2017: The worst firms for career development
For every firm that was praised by its staff for ensuring its lawyers enjoyed high quality training and a decent career path in the RollOnFriday Firm of the Year 2017 survey, another appears to have treated its lawyers as if they were disposable batteries.

But career progression isn't the problem at Plexus, 2014's Golden Turd and hitting 57%. In fact it's the opposite. "Even 1PQE solicitors and unqualified staff get made Associate Partner", said a Plexus lawyer, "so everyone in the firm is now applying for promotion to AP. My cat is having a go". Others said "we are left to it in our client's offices and feel we are managed by our insurer client, not the law firm".  As if from the bottom of a well, they said, "we feel basically forgotten about".


Simmons & Simmons "made a number of ill-advised redundancies as a snap reaction to Brexit" which "are now coming back to bite it in the arse as associates struggle with their workloads". Paralegals complained there was "no progression at all or pay rises. The only way for career development is to get a TC (then you're applying as an external candidate) or leave for a different firm". It was, said a junior, "still quite hard to work out what to do in terms of promotion. Although no longer a trainee, I hear retention rates are still below expectations". Indeed.

Down on 48% was Olswang, soon to be picked over by CMS. The "only way our careers are developed", said an Olswang lawyer, "is by being shat on repeatedly by partners who represent everything that's wrong with the legal industry". At Kirkland & Ellis, also on 48%, staff were divided. There was, said one junior lawyer, "excellent exposure to clients and big ticket work". But another said, "my responsibility is worse now than when I was a trainee - at this rate the NQs will have to wear nappies round the office". At Westminster-based private client specialist Bircham Dyson Bell, its embarrassment of promotion opportunities saw it marked down. Staff said there were "joke partner appointments for those prepared to take the title for £90k a year". It had a "crap client list", said lawyers , and "claims to be a prestigious firm but mainly does the work Farrer don't want". 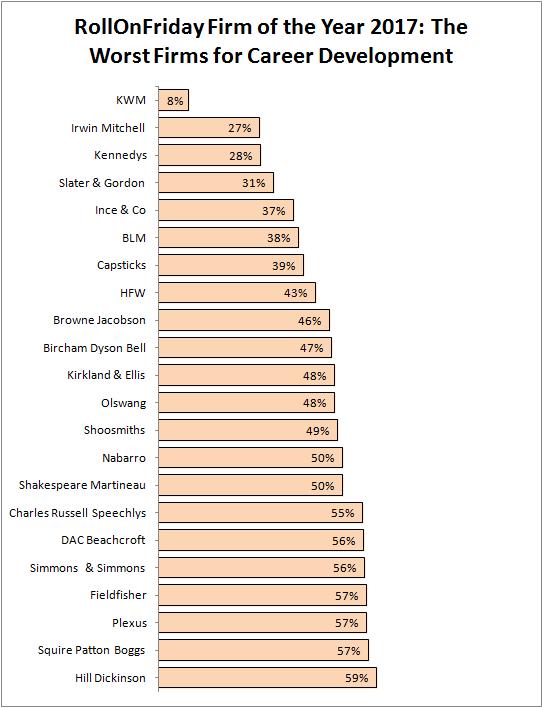 The promotion processes for associates and partners at BLM, languishing on 38%,  had "now mysteriously disappeared from the intranet...along with most of the HR department". Despite hiring a Talent Engagement Manager, "clearly the talent didn't feel that engaged given 4/9 trainees in Manchester office left the firm. Don't even bother asking why we have a Talent Engagement Assistant". The promotion system was "entirely a mystery", with candidates appearing from nowhere to be "propelled swiftly up the ladder despite not meeting any of the supposed criteria".

Some partners at Ince & Co "need reminding that the first word in 'training contract' is training". One new recruit said, "recent excuses such as 'we don't have any meeting room space' simply are not a good enough reason to justify withdrawing almost all face-to-face training for trainees". On the upside, said another employee of the shipping and insurance firm, there was "interesting work". Being "associated with the dross work" at floundering personal injury juggernaut Slater & Gordon "doesn't inspire", said one of its lawyers. Awarded 31%, another lawyer at the firm said it was "hell-bent on getting rid of experienced, talented lawyers and replacing them with underpaid non-motivated paralegals". All but three offices "are apparently closing", said a peer, "and so staff at most offices are sitting around knowing that the end is coming".

Unless "you are prepared to bully others you will not get on", said an Irwin Mitchell staffer. "I've never worked anywhere as bad at espousing the virtue of collaboration", sad a lawyer, "and rewarding the most those who do the exact opposite". It had "no idea about career progression", boasted a "complete lack of transparency" and "most troubling, a complete lack of diversity at board level. If you aren't a white man from Sheffield you've got no hope". Although, said a colleague, after "looking at the bunch of hapless partners around me", they are left "wondering why on earth anyone would aspire to make partner in this workhouse excuse of a law firm".

Bottom of the category, mainly because it has gone bust and therefore offers literally no career development at all, is reigning Golden Turd holder KWM. "I'm facing potential joblessness", said a a stunned insider who filled in the survey in December, "and the morale across the shop sunk deeper than the Titanic after it hit that giant-ass iceberg. Actually, that's kind of what we are as a firm: a pathetic paper-mache version of the Titanic, touted as the 'revolutionary merger' and 'powerhouse' (f**king LOL) that's about to sink without a trace". The "fatcat partners and associated rats have long vanished on the lifeboats", and "now us grunts, including literally hundreds of associated support staff in the ship's steerage, are gonna go under". So that's another record low score of 8%, then.
Tip Off ROF

You'd be hard pressed to find a firm in the City with a flatter structure. The open market work allocation system is deliberately set up such that people have to go out and get the work they want, which includes demonstrating that they're up to the task.

Suggest the person concerned (likely one of our enormous slug of new ex-Magic Circle NQs) takes a long hard look and considers whether their level of responsibility is a reflection of their colleagues' appraisal of his/her ability.
18
Vote up!
26
Vote down!
One can only hope that Nabarro and Olswang people moving to CMS will bask in the dizzy heights of 75%.

*hollow laugh*
19
Vote up!
20
Vote down!
The word is out on Irwin Mitchell which is why it's struggling to recruit people to replace those who are leaving
21
Vote up!
23
Vote down!
What IM have spectacularly failed to realise in recent years is law is a relatively small world, especially in the City. They have no idea how to run a commercial practice for corporates, putting that dreadful Court of Protection lawyer in charge proved that. The sad thing is they did manage to attract some great talent with a compelling sales pitch. Unfortunately they messed that up spectacularly in how they treated those people, who quickly realised their error and moved on. Now it is hard to find anyone who has worked for that firm who has a good word to say about it and so the spiral of decline is gaining momentum. Due to their reputation they cannot replace what is walking out the door. There is no one to blame but themselves for the position they find themselves in.
25
Vote up!
21
Vote down!
The above comment about IM is spot on. The failure is down to the appointment of a court of protection lawyer and a debt recovery lawyer into key positions which they were ill equipped for. The next failure was to keep them in those positions for too long. It will take a decade to undo the damage and that assumes the current incumbents are up to it and can change things for the better. IM's showing in this poll suggests that is by no means certain.
20
Vote up!
21
Vote down!
If you appoint inexperienced managers who lack gravitas then it's not really surprising that most of your decent people leave and you struggle to replace them.
23
Vote up!
22
Vote down!
Surely now that half the firm's left pay and prospects should be improving at IM? Given that all the people who've left were just excess baggage after all?
22
Vote up!
26
Vote down!
It's a sad industry when the biggest bully always wins
23
Vote up!
23
Vote down!