Skip to main content
Firm of the Year 2016: Best and worst loos
In this year's league table of law firm loos, joint Firms of the Year 2016 Burges Salmon and Shearman & Sterling share the sparkling porcelain prize, while Hill Dickinson is revealed to be in possession of a worthy trophy cabinet for the Golden Turd, coming last for its poo-spattered stalls.

Burges Salmon and Shearman came top with 86%, but there is a word of warning for BS. It needs to address the "weak flush", especially on the ground floor: "Nobody likes a stray floater". And a Shearman staffer complains that the bathroom facilities can be "horrible" because "we have to share with DRG (another company) who always leave the loos in a mess".

Slaughter and May scored a decent 75%, let down by several complaints about the fourth floor toilets. Apparently they are used by the disputes department and are "always overflowing with shit. Some real demon shitters in disputes". Meanwhile Allen & Overy (66%) takes toilet security extremely seriously in Singapore, where "exiting the toilet requires you to swipe your security pass and, past a certain hour, also entering a four digit PIN".


One Norton Rose Fullbright (66%) staffer says that the firm has sorted out the infamous "whale calling noises from the toilet flushing system". Others disagree, claiming that it "grows louder and deeper as each year passes". But despite sounding "like something on which David Attenborough should be narrating", they're "clean and reliable".

Except in one lawyer's experience, who says the NRF toilets can be "the stuff of nightmares", describing how "I once went to a disabled toilet which was covered in so much blood it looked like there had been a knife fight". 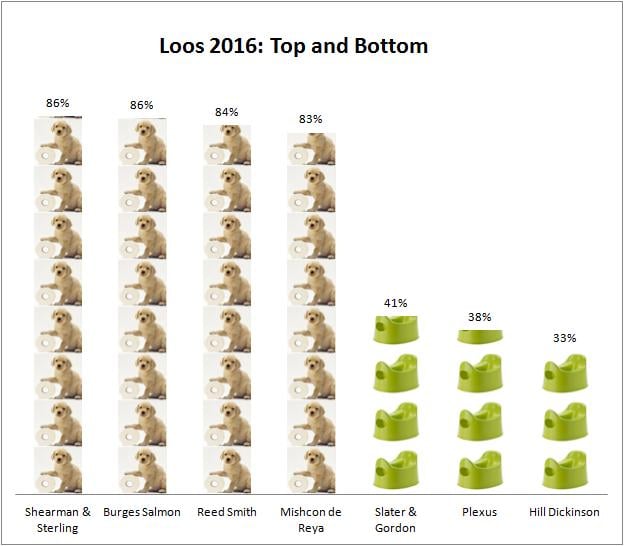 Further round the u-bend, canny King & Wood Mallesons (60%) has bogs which are "so cold they drive you back to work", while a DAC Beachcroft (59%) staffer claims that "in most of the ladies toilets there aren't even any sanitary bins - should we walk round with soiled sanitary items in our handbags?!"

There is shock news for the two-time winner of best loos, Browne Jacobson, which has plunged down the rankings and scores 59%. "After two years of white porcelain dominance", rues one staffer, "we have become complacent". There are regrets, too, at Chalres Russell Speechlys (59%). "Life is too short for the single-ply toilet paper", says an associate. "It gets the job done but it isn't a pleasant experience - a metaphor for the firm in general". It's more jolly at BLM (58%), where "we regularly enjoy a game of 'whodunnit'". Apparently some people who "are incapable of flushing away even a number one, and trying to work out which lawyer has left a floater provides hours of sport".

There's detective work afoot at Squire Patton Boggs (58%) as well, as staff attempt to identify "a bloke who regularly goes off for a tug to the gent's room on the third floor - you can literally hear the fapping and the strained grunts coming out from behind the toilet cubicle". His days may be numbered, however: "Judging by the shoes and sock colour, my guess is on someone from the corporate dept."


Women are not happy with the RPC (56%) bathrooms, which are "too dark" for "effective make up application". The lighting, says another, "makes you look like one of the undead. Just awful". Women are also unimpressed at Watson Farley & Williams (53%), where a "mystery (female) crapper" leaves the loos "in a terrible state".

Meanwhile, it's all work and no play at Herbert Smith Freehills (49%). One lawyer reminisces how "as a trainee I was given instructions on a matter whilst in the gents. Which proves you can't even go for a dump without being shat on at HSF".

"Just the loos" let down Travers Smith (44%), which on the first floor "resemble a third world sewer". In one of the buildings, a co-tenant's employees engage in "toilet tourism'", which leads to "overcrowding, unavailability of cubicles and, most concerning, wee on the floor".

Dispiriting reports from HFW (43%): "when rats aren't popping up out of the toilets", it "takes weeks to fix a toilet seat". And from Kennedys (42%), where the gents "often look like the scene of a war crime", because "seemingly no-one has figured out what toilet brushes are for".


In third from last place, a liar at Slater & Gordon (41%) says the firm has "nice toilets". Plexus places second last with 38%. A few months ago, says a Plexus staffer, "the cleaner complained of people missing the toilet completely". They eventually found the culprit and "told him off", but now "we have signs telling us how to sit properly on a toilet and not squat" so "we don't miss the bowl". The signs "are as bad as they sound" and are even up in client toilets: "I dread to think what runs through their minds". The right thoughts, apparently, with a colleague confirming that since the signs went up, "there has been a lot less shit on the floor".