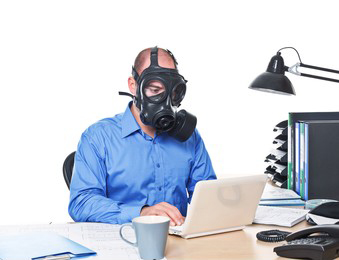 Pre-pandemic masks at the CPS

A barrister who claimed he was harassed at work when a colleague asked him to stop farting, has lost his discrimination case against the Crown Prosecution Service.

Tarique Mohammed, who was a prosecutor at the CPS, brought claims of harassment and disability-related discrimination against his former employer.

Mohammed shared a small office with Paul McGorry from 2016, when he was responsible for "repeated incidents of flatulence in the quiet room". On one occasion, after Mohammed had parped, McGorry asked "Do you have to do that Tarique?" Mohammed told the tribunal that the comment was "embarrassing" and violated his dignity.

McGorry also asked Mohammed to step outside when letting rip - but Mohammed said that he could not.

The former prosecutor told the employment tribunal that his constant trumping was due to side-effects caused by medication that he took, following a heart attack in 2014. The CPS responded that although McGorry knew of the heart attack, he was unaware "that flatulence was a side-effect of the medication".

Mohammed also brought other claims against the CPS, including that a senior colleague discriminated against him when chucking away his used water bottles. That colleague said he thought the bottles were rubbish. But Mohammed claimed he drunk a lot because of his illness and accused colleagues of "ganging up" on him.

Mohammed also complained that the CPS asked him to work one day a week at a workplace 60 miles away from his usual office, and failed to pay for his practising certificate when he was on sick leave.

The tribunal dismissed Mohammed's claims of disability-related harassment and victimisation saying that the incidents "were unrelated to his disability" or were aggravated by him "overreacting," according to a report in The Guardian.

The tribunal said it was not "unreasonable" for McGorry to make the comments about Mohammed breaking wind, given that "there had been repeated incidents of flatulence in a small office."

But Mohammed will receive some compensation, as the CPS accepted that it should not have removed him from court duties and had treated him unfairly by not allowing him to work from home two days a week, or permitting him to leave work at 4pm to help him manage his condition.

“We are pleased the tribunal rejected all claims it had to consider," a CPS spokesman told RollOnFriday. “We employ 6,000 staff  and our goal is to always to be flexible so colleagues can meet their potential even under difficult personal circumstances.”

Farting in a small office is only okay if you use a certain type of software. Without windows, it is unacceptable.

The partner in her late twenties at a small construction law firm in the city farted in front of her client and myself at a meeting at the client's office. I still remember it to date and never could trust that woman ever since.

Looks like a very weak claim. Mr Mohammed was pissing in the wind

This man is my hero, repeatedly dropping ass wind in a confined space and not giving two f*cks about it. Colleague asks him to stop turning the office into a gas chamber and he just shrugs and does it again!

Be like Tarique kids, and if someone complains about it, sue the bastard!

What a load of hot air!

I once cleared a magistrates' court after breakfasting on last nights dandelion and squirrel pie.  I think the roadkill might have been out a bit too long.

You can never tell with squirrel.  It's a bit gamey.

I just did a scotch egg burp thinking about it.

quite frankly Paul was the one who should have been making a claim, being stuck in a small room with Tarique all day must have been tantamount to torture.