A former Investigations Officer for the Solicitors Regulation Authority has said two male colleagues had to leave after they were discovered charging the SRA for trysts in hotels.

Speaking to RollOnFriday on the basis of anonymity, the former officer described incidents which occurred between 2006 and 2012, pre-dating the management regime of Paul Phillips, the regulator's current CEO.

The former officer said that in 2006, a female employee in the SRA's Forensics team began unfair dismissal proceedings after she was sacked in which she alleged that her male manager followed her home and hid outside her house in his car, watching her. "In other words, put her under covert surveillance", said the former officer. The SRA settled the claim in 2007. It declined to tell RollOnFriday how much it paid out.

"Just for good measure", said the former officer, "2006 was also the year the SRA settled an equal pay case with a group of women in Forensics". She said the case involved the SRA putting forward an "aggressive defence", but "pooped their pants when they got to disclosure and got the cheque book out".  The former officer said she learned over the years "this was how they operated".

A year later, a female Investigation Officer made a claim alleging that her male Investigation Manager victimised her after she rebuffed his sexual advances. Again, the SRA settled her claim. It declined to tell RollOnFriday how much it paid out. 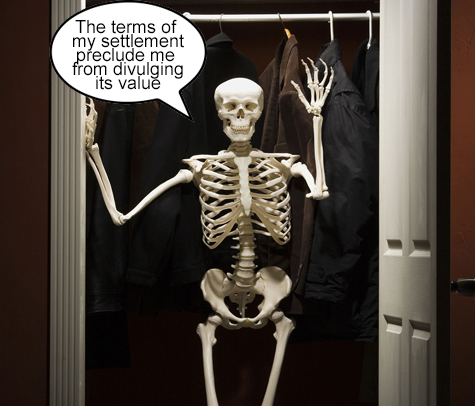 The SRA subsequently suspended the same Investigation Manager, but not for sexual harassment.  Colleagues discovered he was billing the SRA for work while he took lovers to hotels. He "shacked up in hotels with various women at the expense of the SRA when he was supposed to be working", said the former officer.

Instead of facing further sanctions, the SRA "miraculously" made him redundant before disciplinary procedures could reach their conclusion, said the former officer.

Asked what it would think if a law firm suspended an employee for dishonesty, but then made him redundant instead of concluding its investigation, an SRA spokesman said "We would not comment on hypothetical situations".

Bizarrely, another male employee was also accused of claiming expenses for bonking on company time, this time in a London hotel, said the former officer. "He admitted the fiddle and was sacked", she said.

She brought her own claim against the SRA in 2011 for bullying. The regulator settled for tens of thousands of pounds two years later.

Asked about the extensive staff shenanigans, the SRA spokesman said, "We cannot release any personal details about any of our staff or former staff because of data protection regulations".

We clearly need significantly more transparency with our regulator... This is beyond a joke.

Nah, forget that: the entire rotten edifice needs scrapping. Burn it, salt the earth, start again. With, like, competent people. Instead of those who couldn't cut it in private practice.

Nothing about this putrid organisation would surprise me. The poor public and regulated who have to put their trust in this morally debase organisation, whilst they are busy throwing their keys into a circle instead of regulating. What a joke.

ummm isn’t that exactly what the SRA’s own handbook is for??? Indicative Behaviours, anyone???

Physician, heal thyself. How can this organisation credibly continue to regulate solicitors?

What we need, FGS, is some news stories that are less than seven years old.

”HOLD THE FRONT PAGE: Something not very interesting happens. In 2012.”

Trudeau's blackface of no interest to monty don and scep tic, then, as it happened in the 1990s.

'Even if it's new to us, it it didn't happen this week i dont care waaahhh waaahhh'

it's morons like you who encourage wronguns to keep things under wraps. Attention spans of mayflys

Hmm. If anyone has evidence of the SRA blacking up, pls send in.

Big fan of ROF digging up this SRA stuff.

I can confirm that something a Canadian politician did nearly 20 years ago at a party long before he held any office of note in his not-very-important country is of literally no interest to me whatsoever. I suggest everyone else adopts the same attitude, frankly.

I mean, somebody not very important did something not very bad, and immediately got his comeuppance, ages ago. So what? To be honest, I wouldn’t care if it turned out everyone at the SRA is railing hookers over their desks while freebasing crack and charging it all to their black SRA Amex. It could hardly make me think that organisation a bigger joke than I do already.

The public are losing trust in lawyers and the rule of law. The SRA as the guardian of the guardians needs to epitomise the trust, probity and integrity they are there to enforce in others. Instead, they give their mates plum jobs and contracts to their old firms, so there is no peer scrutiny or check/balance, they fiddle their expenses, engage in dubious behaviour and then cover it up and pay people off to avoid transparency - exactly the behaviour for which we would rightly get a kick up the arse from the SRA. What a fecking shambles.

Maybe the source knows nothing much has changed since then and is sick to the back teeth of all that virtue signalling and hypocrisy that is the sra.

Rotten to the core.

If it actually happened.

Shambolic the Ethical Standards Ability and Competence of Staff Managers and overseeing "Forensic Investigations" over that Decade. What reliance can be placed on their work? Are other files these Staff Managers Executives were supposedly "investigating" going to be re-examined. This is evidence SRA employs otherwise unemployable people.

Ironic CEO and Board Members recently stressing need for Transperancy when their own house is in such disorder and biggest Culprit supressing concealing dishonesty in the name of Upholding Public's Confidence in the Profession. "Leading by Example" Ha Ha.

As SRA own incompetence is continually heavily concealed and suppressed it is not surprising that matters are now surfacing regarding the last decade. What is happening now will resurface a few years later no doubt.

Shambolic the Ethical Standards Ability and Competence of Staff Managers and overseeing "Forensic Investigations" over that Decade. What reliance can be placed on their work? Are other files these Staff Managers Executives were supposedly "investigating" going to be re-examined. This is evidence SRA employs otherwise unemployable people.

I think that we do need to remember events from the past, such as the holocaust and the events within the Catholic Church involving abused children, because otherwise how would we learn from the past errors. The outcome involves changes to the laws and public awareness so the past is equally as important as the present. Although events involving Ben Stokes family are not events we can learn from and should not be front page news. However sex scandals and financial rorts from an organisation that claims the moral high ground is an absolute disgrace and I expect that Paul Phillip will now be called in front of a Parliamentary Panel, to explain the past behaviours of his predecessors and to provide a full report to Parliament to ensure that these practices are not continuing.

Never mind Trudeau's blackface, this is all about the red face of the SRA, time and time again and yet they are so arrogant that, unlike Trudeau who apologized, they are trying to hide behind data protection. The fact of the matter is that the SRA are spending their members fees on covering up sexual harassment and using members fees for sleazy hotel romps and are telling the members to keep paying the fees because they have more cover ups to pay for.

It is a crime to not report a crime and the SRA should now be investigated for covering up fraud and sexual harassment.

Anon at 00.23, yes indeed and I hope the members of the SDT have read this piece and the comments with care. SDT members you have a role as a check and balance to ensure the rule of law prevails and that the perception is not of a cozy club of back scratchers. If it does implode and there are many of us that think it will, you will be dragged down with the ship if you are found to have been sitting on your hands, looking the other way.

Wouldnt it be ironic if SRA was getting ex employees to sign NDAs when there was a whiff of scandal and they left; whilst now publicly condemning them.

Roll on Friday maybe interested to ask SRA why they no longer have staff wide Xmas party - could it be to do with misconduct of its  employees at previous parties which has been hushed up by them?