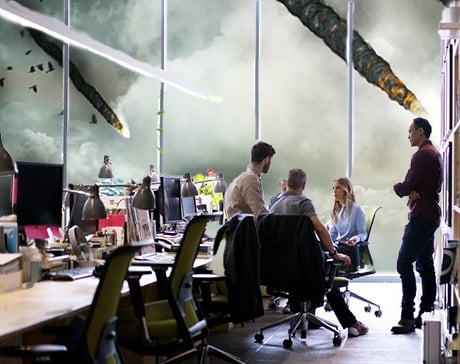 Geoff got more out of his team when they were in the office, and the End Times didn't change that.

Covid has drastically altered the working lives of lawyers and law firm staff, and its huge impact has been reflected in early responses to the RollOnFriday Firm of the Year 2021 Survey.

Some lawyers voiced concerns that partners were falling out of sync with their firm's official working from home policy.

"They won't admit it, but the firm management clearly doesn't really like the fact we are working from home", said a Macfarlanes lawyer. "That said, they've been at pains to take the right steps to keep people safe."

"Officially the firm have been supportive about working from home", said another Macs lawyer. "However, certain partners have used more subtle methods to put pressure on people to come in to the office when they don't feel 100% comfortable".

"Full credit though, the firm didn't do any furlough for GO, Print and on site staff", they added. "For sub-contracted services where staff were furloughed, the firm topped up those individuals salaries to ensure they were on 100%."

At Birketts, "Even now, during Lockdown 2.0, there are partners who are still expecting people to go to the office", said a respondent. "Some partners are said to have exerted pressure on people to come in to the office, but of course no one openly talks about it", said a solicitor at Bird & Bird.

When King & Spalding's offices reopened with Covid measures in place, "certain partners actively and proudly flouted rules by not wearing masks", said a lawyer, and asked associates or trainees "to come in even if they were uncomfortable".

But many firms were also given credit for letting staff make up their own minds. "No one as far as I am aware was forced back", said a lawyer at Browne Jacobson, a sentiment echoed by many respondents.

Some partners may be getting slated, but IT staff have been unexpectedly praised, pretty much across the board. Cursing tech is as normal as breathing for lawyers in private practice, but a global pandemic was apparently all that was needed to make everyone realise the techies were heroes.

"Our IT team stepped up massively when this shitstorm hit, and should be revered forevermore", declared a partner at DAC Beachcroft. "I've had less IT failure at home than I ever had at the office", said a junior solicitor at Debevoise & Plimpton.

The IT staff were "absolute saviours", said a Taylor Vinters lawyer, "and worked their arses off to make it happen - whilst the management and partners have been squeezing their budget on a weekly basis".

At Linklaters, "the operations team have been amazing, as have the IT team and others who have kept everything working". And at DLA Piper "one upside" of the cyber attack in 2017 was a decent IT infrastructure now coming in to its own.

Tech was the "one thing done well" at Womble Bond Dickinson, said a WBD partner. "In fact, so good no one wants to go back to the offices". It meant the firm had a "big problem when we just spent so much on real estate", especially in London, which "was a big risk pre COVID and post COVID is turning into a disaster".

The survey has also revealed a preoccupation with a uniquely Covid perk - the home office allowance.

Respondents flagged that Latham & Watkins provided an "extremely stingy £100" for WFH hardware, whereas Addleshaw Goddard and Herbies handed out a well-received £200, and Macfarlanes recently increased its grant to £500.

Slaughter and May "haven't given us any money" for tech or office equipment "unlike every other firm in existence", moaned a lawyer at the Magic Circle firm.

They're not the only ones making do. "I've had to buy my own IT equipment and told that a laptop might be available first quarter 2021", griped a Clyde & Co partner. "It has taken 8 months to get an office chair and they have only just authorised a £100 budget for a home desk...And as for calling it a 'gold command' structure, don't get me started".

Spare a thought for the junior lawyer at BLM, who developed "awful back pain from sitting on a kitchen chair", but said they were refused a free office chair and "told to just put a cushion behind my back".

Is your firm being Covidiotic or Vacctastic? Rate it on Covid, pay and more.

IT at Travers has been pretty amazing too, can’t fault the team, by the start of this year everybody could work from home anyway - little did we know we’d have to put it to the test.

Think we’ve also had less issues working from home then we did in the office!

Nice that legal operations is being noticed, it would be even nicer if our firms unfroze our pay at the same time they have done so for lawyers.

You're on at least £60/70k. You are able to work from home while many thousands of people are facing redundancy or worse.

Pony up and buy your own chair.

I am a partner and interact with my team and colleagues better from home than I ever did in the office, get more done, no horrible 2 hours a day commute and the office bores don't get to waste my time.

I also get to read my youngest one a story every evening and enjoy time with my spouse. My fellow partners can jog on if they think I'm going back to 5 days in the office each week.

Don't buy laptops, get a full sized machines; they are far more silent than a laptop and last longer. Also get a huge screen, it is more efficient and saves eye strain. We spend hours on end before the screen and there are no reasons to pinch on the penny here.

High Street firm - setup then ignored its own procedures. I was certainly put under pressure to into the office despite having vulnerable family members and there has been talk of compelling people to go in.

I work for Gaia and the good, green earth.

She feeds me and I protect with my love and the power of The Magna Carter.

I love Toby.  I love the way he nails the pretentious pricks who think they own discourse on the internet and think they can deny other people the right to speak because they don't have two ideas to rub together or the intellectual or verbal ability to express them.

So all they can do is try to bully others into slilence.

Toby doesn't hurt anyone or tell them what they can or cannot say.  He expresses his own views in his own way.  You should try it.  If you ever find a view of your own.

Jealousy is not a good look.

It's not Toby's fault if you're not smart enough to appreciate him.

You need to do your research.

There's not enough contempt in the world.....

Who is the partner complaining about not their firm only paying £100 for a desk. How do you not have a desk at home already ffs?

Thank you for your reply(ies), Toby. I'd have expected nothing less.

Funnily enough I've got more interesting things to do than argue with the filth.

I've been watching clouds.  I doubt you noticed but it was a lovely day.

You couldn't have done it without me.

Not quite sure why people are afraid of saying it, but productivity working from home is significantly lower.  Emails take longer to be answered, quality is down, and communication is worse.  All firms see it reflected in their numbers.  We all have to do it these days, as the situation is pretty darn awful, but any prediction that wfm is a permanent thing are completely wrong.

Not sure it is quite right to say generally that “productivity working from home is significantly lower.  Emails take longer to be answered, quality is down, and communication is worse.”

There are practice groups at my firm who are caning it while WFH and doing it just as efficiently, if not more efficiently, than they would be schlepping into the office to then have all the distractions around them. The reality is that where the IT systems are fit for a WFH purpose, the teams are motivated, the clients and instructions are good, and the teams have regular communications set up then there is no reason why productivity should be lower or numbers down.

@16.29 and 18.19 of 20 nov - BLM is a total joke! Underpay everyone and cannot even be bothered to supply everyone with the proper equipment to wfh. Stingy as hell that firm and even with over 90 lay offs still can’t buy someone an office chair!!

Tobes, if you hadn't already noticed, the present score is 15-2. Ladies and gentlemen of the jury, I rest my case.

Ps. It's odd that your "fans" all employ the same writing style.

Fair dos to my firm. They have put pressure on me NOT to go into the office even when I wanted to. This is not only for my safety, but also in case by going into the office I manage to give the impression to anyone less sanguine about going in that they should also be going in! After much wrangling I'm being allowed to call in once a week.

Partner of a regional firm.

We've had a mixed bag re. WFH.  LD 1.0 saw us all WFH.  Post-LD 1.0 most came back into the office but some continued to WFH and thus have been for the last 7 months exclusively.  We've had to actively pressure some NOT to come into the office to balance the room/ensure a C-19 secure working environment but have encouraged (with the most gentle of persuasions) those who appear to be struggling either from a performance point of view or working odd hours and not then having a work/life divide.

LD 2.0 was a different bag in terms of WFH.  We designated, in consultation, certain staff as 'in-office essential' who all welcomed that move (accounts/admin in particular but also lawyers and legal support staff).  It was surprising to see how many actually wanted to return to the office.

As to giving out grants/budgets for equipment - really? We just bought our staff what they needed and/or let them collect their office equipment/furniture (nice comfy chairs included!).

Looking ahead, we're rolling out the opportunity for those who have proven they can WFH (both performance wise and mentally being able to cope with it) to WFH on a 60/40 basis - 3 days in/2 days at home alternating the pattern across the weeks.  After all, they've been auditioning for it over the last 7 odd months!  Realistically we predict a huge take-up on that.

Me, for one, I am never wearing a suit again (unless it's to my own funeral) and will be WFH (even though I only live 15minutes drive away!) and in the office.