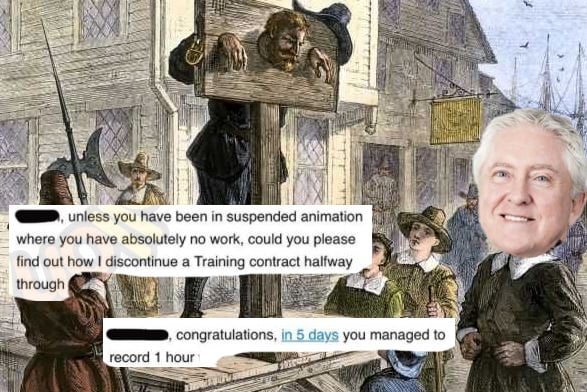 It's the only way they'll learn.

The Senior Partner of a Hong Kong firm has punished his lawyers with a good old-fashioned shaming for not recording their time.

Gordon Oldham, the Senior Partner of Oldham, Li & Nie, told his lawyers in an email that "some of you are not in love enough with OLN and its success to actually mark your time".

"You don't fear any punishment and you are obviously not greedy enough to want to get commissions from the fees that you put in", wrote Oldham.

"So I have decided that maybe I can embarrass a few of you by showing you the attached which of course is for your billable time from the 4th to the 8th of January as recorded - or in the case of [Associate 1], [Partner 1], and [Associate 2], not recorded".

Law firms have been known to circulate their lawyers' time recording stats in an effort to prompt better performance, but it's more unusual to pick out individuals for some dedicated humiliation. RollOnFriday has redacted the names of Oldham's naughty subordinates, all of whom were Asian.

"[Associate 1], the last time I asked you about this you promised me you would start using it and keep it open on your desk at all times", wrote Oldham in the email. "You haven't and you still fail to put in your time".

At least his ire was not restricted to the junior ranks. "[Partner 2], congratulations, in 5 days you managed to record 1 hour", he wrote.

However, junior lawyers suffered his most stinging rebukes, which including proposing a trainee research how to end their own employment.

"[Trainee 1], unless you have been in suspended animation where you have absolutely no work, could you please find out how I discontinue a Training Contract halfway through where the trainee refuses/fails to carry out reasonable instructions from his principal!", he said.

Oldham also implied that one of his associates had been lying to him. "[Associate 3], I used to criticise you for not putting in bills and you always told me you did but your principals at that time were discouraging you", wrote the Senior Partner. "Now, I see that you don't even put in any time so perhaps that was just a made up excuse?"

Oldham finished by promising to issue "formal notices" impacting on bonuses, pay rises and holidays if there wasn't a "marked improvement" in time recording.

According to Oldham's profile, he arrived in Hong Kong as an NQ 40 years ago, and is now involved in running several charitable organisations. His LinkedIn profile photo is a small boy smoking a cigarette next to a chicken, and he lists his education as "Earth 1952 - 2016".

Oldham told RollOnFriday, "My goodness you must be short on newsworthy items to write a piece about an internal communication. Don't you have anything more interesting to say or do? What is there for me to say – the press these days, more than ever, will basically write what it wants to suit its own agenda and titillate or shock its subscribers. It seems to me that your probable subconscious bias as an employee has already determined the manner in which you will interpret the communication".

Addressing the email, Oldham said, "My dog Tommy who is a very friendly Hong Kong Street stray only took one occasion when he backed into a hot radiator to learn his lesson. It seems that he can learn faster than some people these days who are being pulled kicking and screaming into the age of technology. Illustrating who is using technology and who is not hardly constitutes the shaming of lawyers. Not exactly Game of Thrones. Man up...or is that too gender specific these days".

I mean, who doesn't log into Clio, bless her.

Just count yourself lucky you don't have to deal with his brother, Gary. It didn't work out well for Jean Reno.

In fairness, you can understand why he's upset.

Sounds like a bit of a nutter, but his grievance is a fair one and he's at least got a sense of humour about it.

Struggling to see a problem with this one really. Must just be a slow news week.

What an absolute legend.

"RollOnFriday has redacted the names of Oldham's naughty subordinates, all of whom were Asian"

Given that the firm is in Hong Kong, this doesn't sound enormously surprising, does it?

Perhaps we could give the racism angle a bit of a rest for a week? Y'know, like, we could sort of save it for when there's a really good and really genuine reason to bring it up, so as to preserve its credibility in the eyes of the the audience. Like shouting about wolves and other large predators of domestic livestock.

He’s right though isn’t he?

I'm glad you're not struggling to see a problem with it. I wonder if those picked out for mention thought it was quite so funny to be professionally embarrassed in front of their colleagues.

He's definitely right that lawyers need to time record, but this is a terrible way to communicate it!

This kind of blinkered thinking passes for management in law firms.

Time-based billing is unethical - it incentivises lawyers to find the longest way to do anything.

Nor is it aligned to commercial value.

I like his condescending style. What a team building and bonding moment. Some of us can only dream of being treated humanely.

@Pete - who cares if they did or they didn't? It's only words on a page, they'll recover.

Then, get this, if they want to avoid the experience occurring again in the future then all they have to do is the bare minimum expected of any qualified legal professional which is to record their chargeable time at the end of each day.

I log onto my Clio at any chance, and homeworking has greatly improved my stats

Gordon's response: 'Illustrating who is using technology and who does not hardly constitute the shaming of lawyers. Not exactly Game of Thrones.' He is right & funny! The ideal leader of a law firm.

They were told to record their time. Lawyers in most firms have to and then  do it. It is very very rare not to do so so there must have been something wrong with these lawyers who think the rules are above them. This line sounds about right. If they did not even do any legal research and yet were being paid that is very weird.

"[Trainee 1], unless you have been in suspended animation where you have absolutely no work, could you please find out how I discontinue a Training Contract halfway through where the trainee refuses/fails to carry out reasonable instructions from his principal!", he said.

Actually quite in awe of his style, and fully agree with him.

Plus, would imagine he's quite fun to have a pint and a chat with.

1. "Love, fear and greed" to control. Reminds me of an old teacher.

2. Next time you read "the older generation of partners is not willing to adapt" given as a reason for slow digitization in law firms, remember Oldham!

Bit harsh to imply the trainee is about to be fired. Not sure the Law Soc would approve.

Hopefully lawyers at the firm will leak further emails (eg if he issues the threatened “formal notices” docking holiday entitlement) and we can laugh at both them and Gordon’s response to their publication...

Like most people, I expect, I've been employed in firms where the IT is good and sometimes less so. Keeping the clock open isn't always viable in the latter. No excuses for not updating at the end of the day though.

Frankly, however, sending a firm wide e-mail like that is poor management, particularly to a trainee. I expect those he embarrassed are already considering what better opportunities are open to them

The trainee has an online profile on its website

'_____unless you have been in suspended animation where you have absolutely no work...'

Sounds like a delightful man from his emails... poor employees.

The bit where anyone wants to actually hire them into those roles might be a bit trickier.

"Hi shiny new candidate, how did you get on with hitting your annual targets at your old shop?"

"Targets? Oh, yeah, those... well, I undershot them by over one thousand hours a year".

"I refused to engage with the process of time recording in any way, shape or form. Either because I was too stupid to understand how to do it, or because I simply could not be bothered. Or perhaps as some kind of artistic rumination on the arbitrary and transient concept of 'value'. Who can really say?"

Remember: If you are worthy of a 'better opportunity' then just get up and go do it. Don't sit around telling anyone who will listen that you are 'considering' it and will totally go any minute now if people don't start taking you seriously. Any minute! Just you wait and see, if he sends just one more email like that... whatever, you'll still be here in 2030 saying the same thing (similarly, your diet is definitely going to start 'tomorrow'. Again).

Gordon is a legend in HK.

Can we all agree that the named lawyers should have been recording their billables but Gordon is clearly an utter [email protected]?

Great fun seeing my old friend lampooned on RollOnFriday. These emails are quintessentially Gordon - He cuts to the chase and demands performance but is a ton of fun on the way.

Reading the emails without knowing the man would give a distorted view. Ultimately the results speak for themselves, his firm Oldham, Li Nie has a loyal following across the Hong Kong business community, with clients, other lawyers, and even his employees staying with Gordon for years... probably decades.

@0804 yes! Gordon is definitely a character. If only his team is as brilliant ...

“It seems to me that your probable subconscious bias as an employee has already determined the manner in which you will interpret the communication".”

Hes right about the people who write ROF News, at least.

Not that I condone it, but I have seen way, way worse.  How about posting every associates time (cafeteria, hallways), for every one in the firm to see, as motivation?  Happens at many firms.