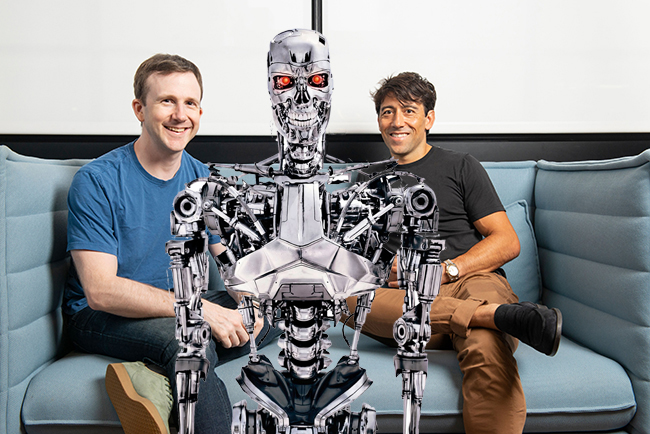 Scanlan (L) and Leon (R) with their next idea.

A former Linklaters solicitor is understood to have sold his legal tech business for over £100 million - and has decided to start all over again with his old friend and business partner.

Travis Leon joined up with ex-Simmons & Simmons lawyer Stephen Scanlan to launch XRef, a program which checked through documents for errors with defined terms, in 2012. Four years later, the pair sold XRef to legal tech giant Litera Microsytems for $10 million.

Leon joined Litera as its Executive Director, and cashed out when the business sold to private equity investor HG Capital Trust last year. While the terms of the sale are swaddled in NDAs, a source close to the deal disclosed to RollOnFriday that the purchase price was nine figures (with no decimal points in the middle). Leon declined to divulge the size of his share on the basis he was bound by a confidentiality agreement.

Leon's law school peers were of course delighted to learn of his good fortune. One recalled the 2007 Linklaters ski trip where Leon and another trainee went off piste and got hit by an avalanche. Leon managed to ski on, but his companion sent an SOS by Blackberry to Linklaters' London office, where a partner took pity and scrambled a helicopter to rescue him.

"I imagine after that incident [Travis] was given lots and lots of proof reading to do", said an embittered contemporary. "Maybe that's where his passion for proof reading came from". 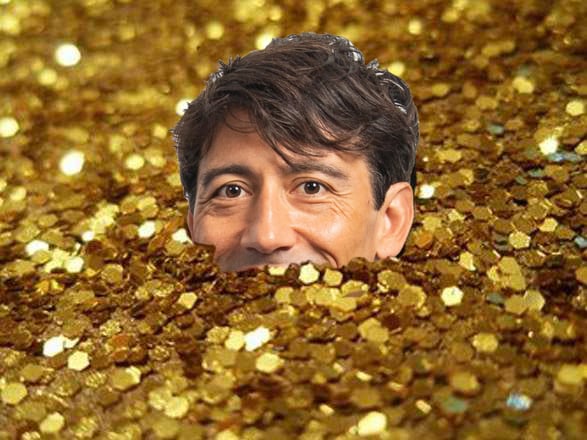 Today he's dealing with a new kind of avalanche.

"If it helps, I was in mountains of debt for most of my life before XRef", Leon told RollOnFriday.

Now he is reuniting with Scanlan for a joint venture called Jigsaw, which indicates that he may not have received an eight figure slice of the Litera pie.

"The problem we’re solving is that lawyers can spend hours trying to visualise transactions or other complicated concepts or advice by diagramming in Powerpoint", said Leon, "which is slow, clunky and produces unattractive results".

Jigsaw boasts features like an app which can convert a hand drawn image into an on-screen diagram, and has so far raised nearly $1.5m in funding. Leon said the money has come "almost exclusively from senior partners, CIOs, CKOs and MDs from most Magic Circle firms, top US firms and large banks".

The market this time around "is much bigger than just law firms", said Leon, "so Stephen and I are hoping this venture is even bigger and better than XRef. If we have another successful exit we might finally call it a day and live in huts on a beach in the Caribbean for the rest of our days!"

Living in a hut in the Caribbean does not require multiple nine-figure exits.

Fair play to them. AI is taking over and lawyers who fail to adapt will not last.

At the same time, may lawyers pretend to understand AI but sit in these meetings and raise more questions than answers and delay progress.

Well done to him.  A proper success story.

No idea about Travis Leon but I can say that, as a former colleague of his, Stephen is a really good guy and deserves his success.

Is that the guy who got chucked out of ILTA for wearing nothing but superman pants to the launch night?

That’s nothing....mi mate Dave just sold out for a bill..

Many prefer the sequel, and indeed, it was piece of cinematic excellence.

However, I prefer the original. The 80s one, were Arnie played a ruthlessly efficient killing machine. Sort of like a Tax lawyer at Travers.

The 80s disco scene, when Arnie identifies Sarah Connor, gets out his laser pointed Uzi 9 millamidda and aims it between her eyeballs is such a classic scene.

Wonder if they wanna buy some satellites.

I thought of this new idea ages ago. Just couldn't be bothered to make it.

Inspirational stuff from both of you.  They make it sound easy but I’m sure there was a ton of hard work going on behind the scenes here. It just proves that If you really want something, you have to go fetch it.