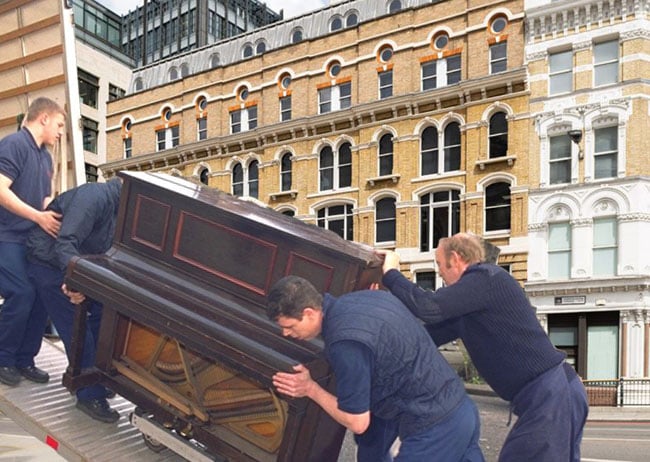 The piano which accompanies defendant testimony will be a brute to load.

The CEO of the Solicitors Disciplinary Tribunal has resigned. It follows the SDT's admission that it is being booted from its current premises, which it had tried to spin as an "exciting opportunity".

Solicitors are being required to stump up £1.2m via their practising certificate charge to fund the SDT's unexpected relocation next year, after it emerged that its landlord had withdrawn an offer of fresh ten-year leases.

SDT President Alison Kellett asked the Legal Services Board at an emergency meeting to increase the Tribunal's budget from £3.1m to £4.3m to cover the anticipated costs of finding and fitting out new offices and a courtroom.

Following reports of the SDT's departure from Gate House on Farringdon Road, Kellett said in a statement that the landlord was selling the property "which is beyond our control".

Now its CEO is out. The SDT announced that Geraldine Newbold had resigned via a statement on its website on Friday. There was no mention of the reasons for her sudden departure. Newbold joined the SDT in February 2016, taking on her leadership roles as CEO and chief Clerk in November 2018.

Two months ago the SDT was confident a renewal was in the bag, telling the LSB in its 2023 budget submission that it had "agreed new terms with the landlord for 10-year leases of both floors". So it must have been a shock when a copy of the sale brochure inviting offers in excess of £17.5 million for the freehold, and specifying that the SDT was leaving in 2023, flopped onto the doormat.

In a letter approving Kellett's revised budget request, LSB Chair Dr Helen Phillips highlighted "the need for the SDT to learn lessons from this situation", and urged it to "consider what it might do differently next time such as getting a lease agreed in writing".

Her advice appeared to some lawyers to imply that the SDT had missed an opportunity to secure new leases, prompting one solicitor to remark that if an error had in fact been made, "it is a mistake which is costing the profession more than £1 million".

However, a spokesperson for the LSB told RollOnFriday that Phillips' comment was in response to the SDT's disclosure that the landlord had withdrawn its offer, rather than a reference to a mistake. The SDT would not answer ROF’s enquiries about whether an error had been made which caused it to miss out on new leases.

Kellett sought to portray the SDT's involuntary departure from Gate House as "an exciting opportunity" and claimed that although it "has been a fantastic space, our needs have changed".

She said new premises would provide "easy access for all potential users of the Tribunal", and will employ technology which "reflects the fact that many more hearings are now conducted remotely".

Kellett said "we will be looking to reduce our carbon footprint by using a smaller space than we currently occupy", which would "provide best value for our profession".

That assessment contrasts with the SDT’s previous conclusion. In its original budget request, the SDT explained that it had explored the possibility of relocation and had "after very careful consideration" concluded that "the most appropriate and cost effective option is to remain in Gate House with a reduced footprint".

In her letter to the SDT, Phillips also wrote that "it will be necessary for the SDT to engage effectively with those on whom the financial burden falls to explain the position". One source queried whether Kellett's upbeat summary of the situation achieved that aim.

In her statement announcing Newbold's surprise exit, Kellett said, "We would like to thank Geraldine for her dedication to the SDT over the last 6 years and wish her the very best for the future. I am pleased to say that Ray Dhanowa will take on the role of Interim Clerk with immediate effect while we seek Geraldine’s full-time replacement as CEO and Clerk".

"The Board of the SDT retains its ambitious vision for the future as we evolve to continue to meet the needs of all our users, embrace technological advances and provide the best value for our profession and remain committed to the SDT’s core responsibility, which is to provide justice to those that come before it, maintaining and upholding the reputation of our profession", added Kellett.

Opting to interpret the LSB's request for transparency narrowly, the SDT did not respond to RollOnFriday’s requests for comment.

Who is responsible for missing the lease renewal???  They have only recently closed for a few weeks for refurb, so clearly didn't anticipate it.  Some investigative journalism needed urgently.

The fact that the building is now up for sale is irrelevant: the marketing details (from Allsop) show that it is being offered for sale subject to existing leases.

"A spokesperson for the LSB told RollOnFriday that Phillips' comment [about getting a lease agreed in writing next time] was in response to the SDT's disclosure that the landlord had withdrawn its offer, rather than a reference to a mistake."

Even if that's true, why did the SDT not accept the new lease while it was being offered?  That failure is costing more than £1million.  If there was no mistake, why is the SDT not responding to requests for comment?  Why do the documents on the LSB's website contain no proper explanation of what happened here?

A statement has appeared on the SDT's website today, announcing the departure of the chief clerk.

10:13, I'm as cynical about our regulatory bodies as anyone, but why is it relevant that the landlord is selling subject to existing leases? It has to do that because they haven't expired yet. If the SDT's leases are due to expire and did not make provision for the SDT to renew unilaterally (which of course they would not), it's surely not the SDT's fault if the landlord has decided it wants to terminate them.

Anonymous 02 December 22 10:25 If there were an innocent explanation, as you rightly suggest is possible, I would like to think it would have been mentioned by now.  The statement on the SDT website was evasive.

The landlord didn't want to terminate: it was offering the SDT a new 10-year lease.  Had the SDT accepted that offer, the building would have been sold subject to that new lease.  As it is, the SDT missed out on the 10-year lease for reasons which have not been properly explained.

It's up to the SDT and LSB to provide a candid explanation of what has happened here.  Who was dealing with the lease renewal and why did the SDT miss out on the 10-year lease which was being offered to it?

oh dear - did someone forget to diarise the deadline to apply to court for a new lease after the s25 was served?

The SDT’s lack of transparency on this matter is antithetical to the values it should embody. The sdt either needs to confirm nothing was done wrong and show it, or admit culpability. If the latter, Kellett should also resign and there’ll need to be a review of how this farce was able to happen.

I wonder how the SDT would have treated me if I'd failed to get an agreement put into writing and signed or forgotten to diarise a deadline?

If it turns out that a mistake was made, the SDT statement looks highly misleading (because it tries to present this as something which was outside the SDT's control, rather than disclosing any error) and those responsible for that statement will have to go.

The SRA: we are the most incompetent regulatory body in the profession

Erm ... there is statutory protection for business tenants at the expiry of their lease provided the right processes are followed. Some explanation necessary as to why this didn't help the SRA?

Maybe it wasn't a 1954 Act lease.  But the fact is that the lessor was offering it a new 10 year lease and it failed to get that lease, as a result of which its budget has increased by more than £1million.  Looks like someone didn't draft a notice properly or missed a time limit.

The SDT was recently closed for refurb, so their exit can hardly have been planned or intended.

Brilliant. So they come down hard on us but when we demand a satisfactory explanation we are avoided.

Why do bad things happen to good people?

They should look at ways to reduce costs to the profession. Maybe hearings can be held in conference rooms/ meeting rooms which can be hired as and when needed- Chancery Lane has a lot of space. They could then just confine themselves to office space with say just one Courtroom. I could definitely come up with a couple of options for them to consider for a reasonable consultancy fee.