Dr Dorothy King, author of The Elgin Marbles, said the partner made the comments to her at a pop-up restaurant in East London earlier this year. RollOnFriday is not naming him.

At the event, 'Chatty' repeatedly pressured King to make pornography for him, according to King. "I’m not a prude, and support people’s rights to their vices", King told RollOnFriday, "but not only did I not consent to [Chatty's] bull, I repeatedly said no, I pointed out that solicitation was illegal, and I suggested he should go wank with a cheesegrater instead". 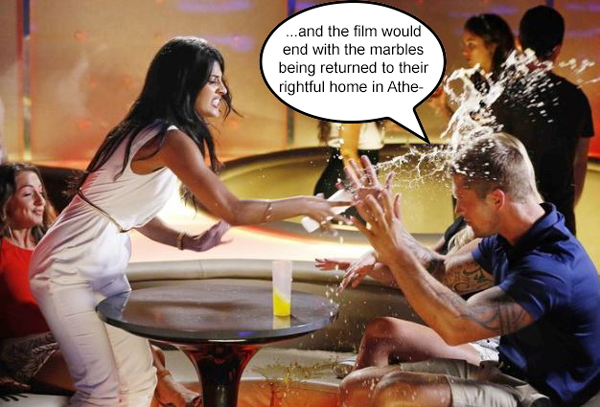 Chatty told RollOnFriday, "The allegations made are totally false. The lady provided me with her personal phone and email. We had pleasant correspondence after the dinner. She offered to find me opportunities to speak at conferences. I have no idea why she is doing this."

King said she was not intending to pursue the matter. "I have been told by enough douchebags that I’m a castrating bitch", King said, "so as unpleasant as it was having to sit next to him at a dinner, I could deal with it".

She decided to take action when, she alleged, he behaved inappropriately towards a waitress. "Men who treat women like me as if we’re whores usually treat women working as waitresses and for them far worse", she said.

King submitted a complaint to Steptoe, a white shoe firm headquartered in Washington D.C., but received no response and went public on Twitter.

King even left a Google review of Steptoe referring to the incident. "I had the misfortune of being seated next to one of their partners at a dinner", she wrote in her one star pan. "He kept harassing me to make pornography".* It's currently the firm's only review. 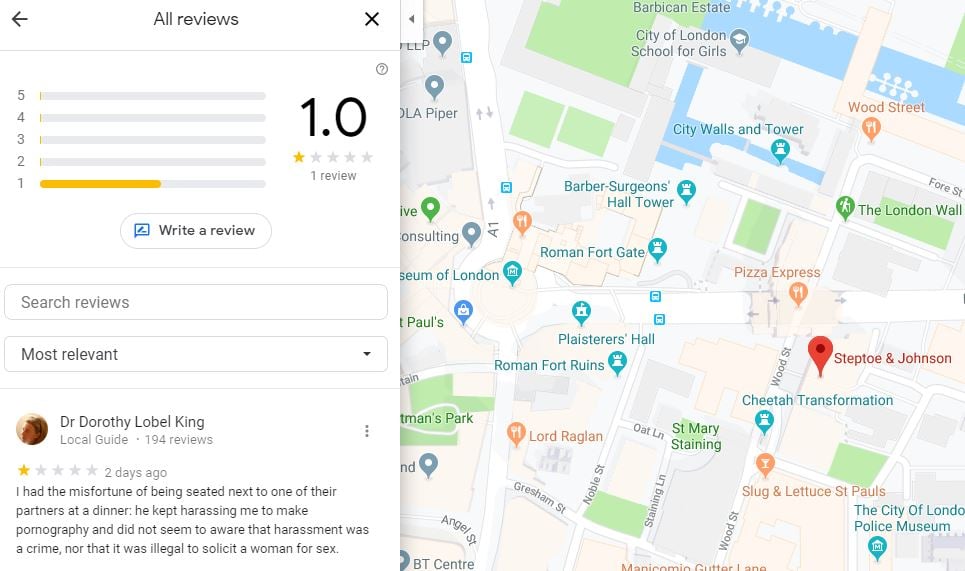 Instagram then recommended Chatty's profile to King, which she claims showed he followed multiple accounts which appeared to belong to sex workers.

"I assume that your partner is going to argue the 'those stupid women misunderstood' line", she tweeted to Steptoe, posting screenshots of the ladies' feeds. "But luckily the Instagram algorithm 'recommended' his account. He is clearly pro professionals and working girls, but... I'm not a hooker, nor was the waitress". 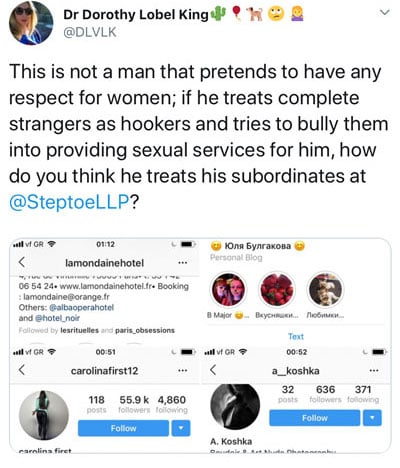 Chatty told RollOnFriday, "I do not follow sex workers".

King never heard back from the firm. Contacted by RollOnFriday, a spokeswoman for Steptoe said that when it received King's complaint, "we immediately conducted an internal review and concluded that the allegations were made by a non-Steptoe employee following a private dinner party unaffiliated with firm business and involving a lawyer who had already tendered a letter of resignation for unrelated reasons".

"That lawyer has since left the firm and we consider this matter closed".

King has amended her terms of service to refer to the alleged incident. "If you ask me to make pornography for your titillation, and won’t accept 'no' as an answer, then there is a handling charge of GBP £0.5 million per request", she states on her website. "If you touch me inappropriately, I reserve the right to knee you in the groin."

*King has also left an intriguing review of Hogan Lovells: "As a woman, you get ridiculous offers from a slightly pushy solicitor with this firm - it wasn’t anywhere as horrific as the harassment from the Steptoe solicitor, so they get 2 stars. I’m still not sure why I should work for him for free just because he represents Amazon, and I definitely wouldn’t want to go on a trip with him, but he *could* be reasonably decorative if he didn’t say idiotic things and got a better hair cut."

Was any evidence offered to support the allegations?

She seems to be utterly deranged. Run for the hills, Chatty!

I don't want to come over all Cocklecarrot, but whom or what is a 'douchebag'?

I found this hard to follow. All round a strange incident.

What does "whiteshoe" mean?

I think she sounds honest - angry, but honest. Unless you've been on the receiving end of this sort of nonsense from men, it's hard to understand just how awful it is, and how common it is. And then when you do say anything, the evidence brigade jump up. tbf we don't know exactly what happened but we at least deserve to listen to what she says, just as we listen to his response.

Unsupported allegations of harassment. Phd in something not remotely useful. Twitter account for her pet. It's feminist full-house Friday!

It sounds made up to me. Time to get those reviews taken down.

I hope there is no victim here - hard to tell from the fun you seem to have with this. So, you name everyone else (including the firm who he 'has now left' (wonder why)) but not him and not the firm he is now working for nor the town he comes from (presumably everyone who lives there behaves like him too)? Cowards rollonfriday, shame on you. The underlying message is serious here, so why are you so happy to dance on the firm who got rid of him and not rat out the cretin himself. If you are so sure of your facts, I challenge you to name him and put some common sense into your written work. If you can't do that then when it comes to issues like this, what is your role really? Time to actually do some journalism ROF. Does the firm have a reputation for this or something, is that why you are focussing on them? Do they have a bad diversity policy or something?  #whatareyourrealmotivations ROF.

Are you a DM "reporter" wandered off-path?

Why on earth would ROF name him when there is not a shred of evidence and she seems utterly deranged?

In the current #metoo climate, his life would be ruined even though she seems to just be crazy.

Let's say this is a he says / she says. So no incontrovertible evidence. Doesn't mean it never happened. Doesn't stop her expressing what she knows to be true. Doesn't stop me believing that it likely is true on the basis that fantasists are statistically less prevalent than harassers willing to deny misconduct.

No 11.21, I really wouldn't, because it's absolutely none of your business.

Evidence, if you had any, 11:45, would not only be my business, but that of anyone reading the article. But you don't have any evidence so it doesn't matter.

there is a fair whiff of the mysoginist on some of these replies, a lot of "ooooh, crazy woman" shitt

@11.26 - so why are they entitled to go at naming the ex-firm in the same vein? they seem to enjoy a lot of this. Firms can look after themselves, but there is no balance to a story like this. yes, she seems deranged of course but what's at the route of it all, maybe we're being unfair. Someone else said it right - all rather Daily Mail. I get that the readers are intelligent enough, I just wish the writers would think about their audience.

@Human - we don't know what she knows to be true. Doesn't mean it happened. I don't believe that false accusers are statistically less prevalent than harassers willing to deny misconduct. Silence indeed favours the oppressor, so let's not be silent about the evidence.

I never thought you did have evidence 13:27. But of course evidence remains my business and that of anyone reading the article. You sound more frightened of what evidence might reveal than genuinely concerned about whose business it is.

Don't see much misogyny Sumoking, after all the criticism is directed at one woman rather than all women. There is a whiff of misandry in some of the comments implying that no evidence is needed to believe claims like these. You do have to wonder about people with the knee jerk impulse and gullibility to write that.

ROF. I thought you were joking about the T's & C's

Dr King. have you left comments above ?

Totally disingenuous comment @13.41. Women who report sexual assault and rape have been called "crazy" since time immemorial. Its the perfect way to undermine their credibility - maybe you should read Freud's the Aetiology of Hysteria (or in fact the origins of the word "hysteria")so you can understand. It's classic old school misogyny.

I knew someone when I lived in Leeds who had reported Jimmy Saville for sexual assault when she was very young (13 in fact). She was also (at the time) called "crazy", "deranged", "nuts" etc. Plus ca change......

[email protected] - there is evidence. There is the complainant's testimony. What you really meant to say is you don't think is worth anything and you don't believe her (because she is a woman).

I suggest you subordinate your doubtless sincerely and deeply held beliefs about the relative prevalence of fabulism and harrassment to the bountiful empirical evidence to the contray.

@Human - suggest you don't try and conflate the unsubstantiated allegations here with rape (although false allegations of rape are generally understated) and instead concentrate on evidence to support the claims made in the article.

If one were to analyse Steptoe's departing members, one can assume who it might be.  Totally unfounded if so.

Good to see some robust debates about the nature of evidence and the weight to be accorded to mere allegations.

Really makes me hope that there might be some actual lawyers somewhere.

Freud would probably define hysteria as comparing the allegations here with those against Savile (note spelling), Cat's Pyjamas. And old school misandry as calling anyone who questions allegations as sexist.

“Soliciting” someone to appear in pornography is not illegal, actually.

Let’s assume he did ask her to make him an amateur p0rno and let’s assume there’s evidence to prove it.

Next question: who cares? He was only asking.

Wow. Interesting read but #Sherlock - sadly you are wrong about this character who should know better and clearly has more skeletons to hide about his behaviour.

We don't know that what was alleged actually happened, 15th July @9:56, so we can't say if he should have known better. What other skeletons?

Ah yes "misandry", the invented grievance of every men's right activist. When two men a week are killed by their current or former partner in the UK, then you can whinge about "misandry".

None of what you say justifies misandry though, 'The Cat's Pyjamas'.