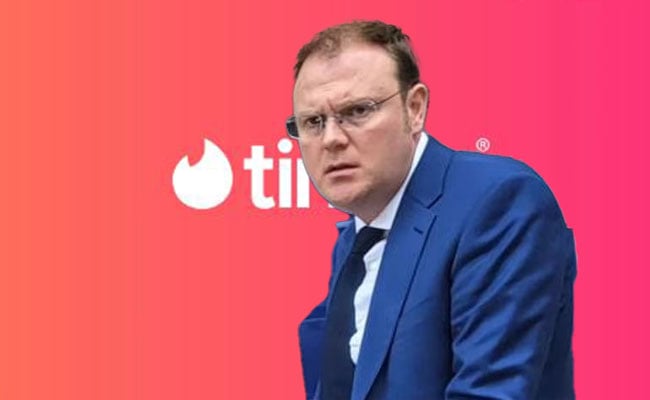 A barrister has been sentenced to four years in prison for raping a woman he met on Tinder.

The 39-year-old barrister withdrew after approximately 30 seconds and then told the woman, also in her 30s, to “come for a cuddle”, before offering her paracetamol.

As the victim lay on the bed, Jacobs said, “It's not funny, I shouldn't laugh”, and chuckled to himself.

The woman said, "At that point I was just face down on the bed. I didn't know what to do with myself - I was in quite a lot of pain". She said, “There was no discussion, absolutely no warning, there was no touching, foreplay, warning. There was nothing”.

"And then he told himself twice that it wasn't funny, that he shouldn't laugh, not to laugh, and then after the second time he did laugh".

"I would say that [he used] a huge amount of force. It felt like what you would describe as a stabbing pain", she said.

When she was examined at a specialist sexual assault clinic, the woman was found to have a laceration measuring 2.5cm by 2mm which experts agreed was likely to have been inflicted with "at least moderate force".

The lawyer, from east London, reportedly has autism which impacts his ability to interpret social signals.

After the incident, Jacobs texted a friend to say that the woman’s response had been “a bit of an overreaction”, adding, “I just hope there's no trouble as a result. I apologised repeatedly when she was here”.

Jacobs texted later, “I haven't been nicked yet, so that's good…If the police are after you, do they leave a message or raid you at 5am?”

Jacobs claimed he was confused about the incident and had stumbled into “laddish” behaviour to “navigate social interactions”.

“I thought she was absolutely fine”, he said. “I am not a cruel, aggressive person. That is not what I'm like. It wasn't something for my own gratification as the phrase goes. No”.

When he was convicted, Jacobs shouted, "I didn't do it. I was telling the truth. Oh my God", then recovered himself and thanked the judge for levying the "lowest possible sentence".

"I am satisfied on your evidence that you did genuinely believe that your victim would consent", said the judge, but it was “wholly unreasonable in the circumstances".

Nice of the judge to make it clear that he was only sentencing the barrister because he was forced to not because he disapproved of him actually anally raping this woman.

Suspect that he will have a far better understanding of what is and isn't reasonable to expect on a second date after that.

You know, I think that even I'm going to give this one a wide berth.

So will I. This is a real case with a conviction supported by evidence following a trial, not some unsubstantiated allegation.

Good to see the open and repeated mocking of Question Man. What an odious individual, with his silly, bad faith enquiries.

Question Man 16 September 22 10:48: glad to see you are exercising some rare judgement. Maybe you have taken your meds for once.

@11:25 - what evidence do you have that I require meds for what, to any casual observer, might appear to be deeply-rooted psychological issues that render me highly unlikely to be able operate normally in everyday society?

This guy will be disbarred.

The probably should have had a contract first to avoid any complications. People should not take consent issues for granted.

I suppose it helps show that people are a lot safer on the whole if they only have sex within marriage (although even that does not mean you are 100% safe). May be celibate nuns and monks have made the safest choices.

Took 5 years to conclude this case. How awful for the victim.

From the agreed reported facts, he was extremely unlucky to be convicted. Cock clearly went up her arse voluntarily. Then he removed it after she complained, albeit a tiny bit less quickly than he could have done. He then acted like a bit of a twat, and said some arsehole things at trial. He has ASD. Hardly a proper rape.

On a broader note has anyone noticed the insane (to a casual observer) disparities you sometimes see in sentencing decisions.

I would say the sentence in this case is about right all things considered.

Today a former DJ (Alex Belfield) has been given five and a half years for sending abusive and threatening emails to former colleagues at the BBC.

And a young Muslim man who knocked out three women cold during an altercation giving one of them a bleed on the brain and two of them lasting scarring has received a suspended sentence.  He walked off and just left them lying unconscious in the street.

3 women were knocked out cold after encountering thug in Nottingham side street - Nottinghamshire Live (nottinghampost.com)

It seems entirely the wrong way round to me.

@12.43 - agreed, your @11.51 is brilliant. Evidence is so important. A casual observer might also note the importance of asking questions to verify unsubstantiated allegations.

@Jen - what evidence do you have to support your accusation that 'Question Man' is 'everyone’s favourite common or garden narcissist'?

We all thought we might be spared Question Man's nonsense on this thread. But he cannot help himself.

Yes, but you see the thing about obsessive compulsives is that their behaviour is compulsive, and obsessive.

He actually can't fail to take the bait.

Just in case anyone was wondering whether this is an isolated incident within our profession, I give you 13:24.  And there are plenty more like that around too.

The most ill-conceived attempt to use the ‘top bantz’ defence I’ve ever seen - in a very crowded field.

He can’t have been much cop as a barrister if he thought that would fly.

Some very strange comments in here.

The sentence given to the thug in the story Paul linked is a disgrace. Far too low.

@Lydia don’t be ridiculous- most rapes happen in marriage or are committed by a current or former partner. As someone who was raped by her husband, can I just say you are talking absolute bollocks.

Also if you know you struggle to read social signals and cues, you should be more careful when it comes to issues of consent, not less! This guy felt all the entitlement to just shove it up there, without a scintilla of concern about whether she wanted it or not. Rapist f***.

By the sound of it the judge wanted to give him a medal.

Oh, you committed rape, how sad for you, I apologise for sending you to prison. How rotten of the victim to complain.

Oh look - 4 rape apologists identified themselves via the thumbs down @16:18. Any more of you like to prove the point?

It is always women that pay the price.

Only in extremist feminist “literature”.

Look at this horse [email protected]

“It is always women that pay the price”

A large number of men and boys are also raped every year.  No doubt extreme pornography plays a significant role.
Would you like to reflect upon that and amend your stupid/ignorant comment or are you happy to leave it up there?

@ disgraceful comment - who rapes them? Oh yes it’s men isn’t it. The number of men raped by men is totally dwarfed by the number of women raped by men. I stand by my comment. Maybe you should reflect on your lack of empathy for women and why you react so badly to any comment that tries to centre them and their concerns.

The rape apologists are out in force.

Only in extremist feminist “literature”, such as this?!

Anonymous 21 September 22 11:16: the mental health professional will let you know. More likely than not, you suffer from obsessive compulsive disorder and narcissism. These are serious illnesses, which affect your ability to engage with others in a normal way.

@12.47 - although of course nobody is apologising for rape in any of the comments. Still, why let the truth get in ghe way of baseless accusations.

Question Man probably has some form of personality disorder, too.

I am not diagnosing you. That will be the job of the mental health professional.

anonymous 22 September 22 10:03 - yes, probably antisocial, borderline and histrionic personality disorders. They fit the persistent, bad faith enquiries made in a public arena. This is a troubling pathology. Question Man is undoubtedly ill.