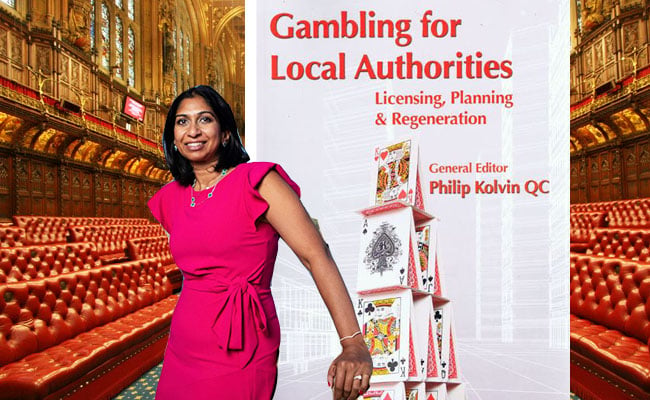 Suella Braverman has been asked to clarify her academic bona fides after a barrister rubbished the claim that she contributed to his legal textbook.

Braverman’s profile on the website of No5 Chambers, where she worked before becoming an MP, claimed that she "is a contributor to" the 2007 bestseller, Gambling for Local Authorities, Licensing, Planning and Regeneration.

But Philip Kolvin KC, the book's author, told the Big Issue and confirmed to RollOnFriday that Braverman "did not make a written or editorial contribution to the book".

The extent of her involvement was menial, indicated Kolvin, who said that "on one occasion I asked her to do some photocopying for the book, which she did".

The embellished CV was published on No5's website before Braverman became an MP, and has now been deleted in full by chambers staff, allegedly at Braverman's request after reporters got in touch to ask her about the inconsistency.

There is precedent for the regulator taking action when barristers gild the lily. In 2013 Dennis O'Riordan, a partner at Paul Hastings, was suspended from practising as a barrister for three years for falsely claiming on his former chambers' website, and his professional profiles, that he went to school at Radley and studied at Oxford and Harvard.

RollOnFriday asked The Bar Tribunals & Adjudication Service whether it was opening an investigation into Braverman's alleged massaging of her credentials and, if not, why not, given the importance it has historically placed on barristers telling the truth in their website profiles and CVs. It did not respond.

No 5 Chambers did not respond to an email asking whether Braverman was responsible for the questionable phrasing of her deleted profile.

Fake it till you make it, would seem to the mantra of the Conservative Party

But when are they actually going to get round to 'making it'? It's been 12 years...

Does it matter? I can't see anyone would ever instruct Braverman if she returned to the bar. A profoundly unimpressive person who's credibility was crushed by the Court of Appeal in Long, Bowers & Cole.

whereas the routine claims of sole credit by partners/KCs for work done by juniors researching and drafting the analysis, and arranging and reviewing others' contributions etc for a "chapter in a leading book" with only the partner's and perhaps firm's/set's name is totally acceptable. Even worse in firms' native knowhow pieces, where you'd sometimes be hard-pressed to find the author's name, or that of anyone who has in fact read the piece. (Before anyone says "but they are the employer, you've signed your rights over to them for the paycheck" - not moral rights of the attribution of authorship.)

"A profoundly unimpressive person who's credibility"

Educated at Cambridge and the Sorbonne.  Profoundly unimpressive.

Not, I am sure, that it makes any difference at all, I see that Kolvin seems to be a chum of Sadiq Khan.  Who could imagine such an eminent KC's claims being influenced by his view of a different political party?

How can it credibly be said that Suella Braverman is “unimpressive”? She went to Cambridge, is a barrister, was Attorney General and is now Home Secretary - one of the Great Offices of State.

And frankly, Kolvin’s conduct calls into question his decency and judgement. If he had either, he’d have contacted her privately in relation to what might well be a simple misunderstanding, rather than going public immediately. It might be that what he did was a breach of the Bar Code of Conduct, by undermining confidence in the profession. Perhaps BTAS should have a look at him?

Utterly dreadful if she did. I have written and contributed to law books and I would never claim I had worked on something I had not.

On the comment above about moral rights - it is a right not a requirement. So if an employed solicitor said I assert my rights put my name on then they have that right. If they do not then there is nothing wrong in law with not having their name. That contrasts very strongly with someone lying.

Spot on. Suggests malice on his part, too. Very unsavoury. Kolvin should self-report to the Bar Standards Board - or else his Chambers should report him.

- This is an off-hand comment on a discussion board, not a note of advice. But well done for your typo-spotting. I see you are a real "value add" lawyer.

- I really don't understand why you think going to Cambridge makes you an impressive lawyer. One meets lots of middling lawyers from Oxbridge.

- I would go so far as to say it is not just impressive but "extraordinary" that Braverman got to be AG and then Home Secretary. However, that is more a tribute to her skills as a political hack, than her intellect and integrity (certainly the latter).

She is a disgrace to the legal profession.

Anonymous 07 October 22 12:58: your degree from Warwick obviously really hurts. But not everyone is bright enough to get into Oxbridge. Try to get over it. Or at least don’t voice your chippy, half-baked views in public. You are embarrassing yourself.

Straight Firsts from Oxbridge actually. Means I know a middling lawyer when I see it.

Nothing sadder than an Oxbridge graduate thinking they "really clever". All it means is you did well in your A-Levels many years ago.

@1318 welcome to the club! You are the 2382722th person in the ROF comments with straight firsts from oxbridge. Get a life, Warwick boy

Anonymous 07 October 22 14:47: nobody who went to Oxbridge would write such drivel. The Oxbridge entrance process, including the interview, ensures that only the brightest get in. The simple fact is that those who go to Oxbridge are the intellectual cream of their generation.

Going to Cambridge, then becoming a barrister, Attorney General and Home Secretary, is on any rational view impressive. Those arguing otherwise are either mad or doing so in bad faith.

I think these comment on peoples ability are becoming related to Academic Ability… Sure some may have come from Oxbridge or other University's .but in my book can be classed as STUPID…example Boris J. …How stupid can you be to think you can bluff your way. S Braverman’s comments about employment in the Agriculture sector, ,,,its being practical and understanding that counts in my book,,,RANT OVER!

If she lied about this, why should he have to approach her first? She has breached his trust in making the false claim about his work and she is entirely in the wrong. He doesn’t owe it to her to contact her privately, so she can weasel out of it with no repercussions.

Buthert 08 October 22 12:27: but on its face, her claim might not have been a lie. It could have been an honest mistatement arising from a misunderstanding. He could have approached her to get her side of the story first - which would have been the decent thing to do (and an exercise of the sort of judgment expected of a senior barrister).

This is clearly a politically and personally motivated attack by a leftie barrister.

The only person who comes out of this badly is Philip Kolvin KC.

Suella Braverman is an idiot.

Loads of Tories on here, blimey!

if she was that ‘impressive’ she wouldn’t feel the need to over egg her own pudding, surely?

Again, “decency” is not required when someone is stealing credit for your work. If it’s politically motivated, so what? Bravernan lying makes it fair game. More than that, it is in the public interest that we are made aware of a prominent politician’s dishonesty.

“an honest mistatement arising from a misunderstanding”

If what Philip Kolvin has said is true, how could this possible be the case? What honest misunderstanding could there have been?

Of course, if what Kolvin has said is not true, or not the full facts, that’s completely different. But my comment above made the assumption that it is.

@Honest Henry 09 October 22 17:14 - remember that nothing against her has been proved. Kolvin has simply made an allegation (and in circumstances which seriously call into question his own professional conduct).

"The Oxbridge entrance process, including the interview, ensures that only the brightest get in. The simple fact is that those who go to Oxbridge are the intellectual cream of their generation".

This is laughable. Some Oxbridge lawyers are amazing. Some are pretty average. Some are actually quite poor. (Like any normal distribution.)

P.S. Braverman is not just deeply unimpressive. She is also an awful human being.