An Allen & Overy partner involved in drawing up a gagging order on behalf of Harvey Weinstein has been referred to the Solicitors Disciplinary Tribunal.

Solicitors Regulation Authority chief executive Paul Philip confirmed that the SRA had referred an A&O lawyer involved in the Weinstein NDA as he spoke to the Women and Equalities Committee this week. “The solicitor involved is one of the cases that has been referred to the solicitor’s disciplinary tribunal", he said, but did not identify the person.

Mark Mansell, a partner at the firm, drew up the gagging order in 1998 after Zelda Perkins, one of the disgraced Hollywood mogul's personal assistants, accused Weinstein of sexually harassing her and attempting to rape a colleague. The NDA was onerous, requiring Perkins to:

Perkins said Mansell and the A&O team ground her down and that she was "broken" after several "incredibly distressing" and "intense" negotiation sessions at Allen & Overy's London office. Perkins said her grilling culminated in a 12-hour marathon which finished at 5am. 24-years-old at the time, she said, “I was made to feel ashamed for disclosing his behaviour and assault, and expected to name those I had spoken to, as if they too were guilty of something". 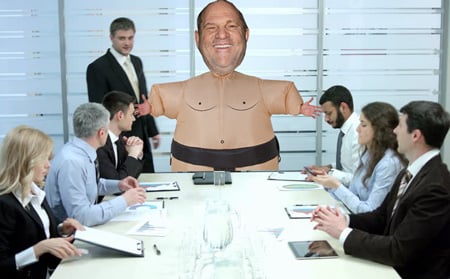 It was distressing for everyone.

An ex-Miramax employee suggested to RollOnFriday that Allen & Overy "must have put together a load of NDAs" given the stories that had not emerged about Weinstein's behaviour in the UK. She said, "Certainly my boss cannot speak about anything because of what he signed".

In correspondence with RollOnFriday, another ex-Miramax staffer said, "I would think that any lawyers involved in Miramax business, namely Allen & Overy, knew exactly what was going on given that Harvey's 'antics' were an open secret".

In March 2018 the SRA warned solicitors not to use NDAs to stop victims reporting sexual misconduct. Bettina Bender, a partner at law firm Winckworth Sherwood, said that sexual harassment "was effectively ignored or swept under the carpet for a very long time” and that the A&O lawyer's referral "evidences a new risk for legal advisers". Advice they gave to parties before the #MeToo movement and the shift in public perception "will now be revisited through today’s lens" she said, "with the related reputational and professional conduct risks", which includes fines and a potential striking off.

Philip said it had taken so long to bring a prosecution because, despite the NDA making headlines in October 2017, the SRA only became "engaged" 10 months ago. He said the referral followed further advice received from counsel.

A spokeswoman for Allen an Overy said, “We are unable to comment on an ongoing investigation”.

You can question whether the law needs changing and whether A&O should have accepted the instruction, however, surely they simply acted in their client's best interests. Should have have negotiated a weak NDA?

So there's acting in your client's best interests when negotiating an NDA and then there's stipulating that parties cannot speak about the incidents which are the subject of the NDA "...even when required to do so by law..." (according to the above article).

If this is true, interested to see how the SDT action plays out.

I will freely admit that I am not a criminal expert, but two points:

1. I am not aware that it is illegal to "gag" the reporting of a crime.

2. If it is, surely it is simply a severable obligation.

I have seen many agreements with "illegal" terms (particularly around competition law). Should all those lawyers also be investigated. What about termination of employment cases where there is, for example, theft. Both parties usually sign a confidentiality provision with reference terms agreed.

As a woman in the firm, I feel its pretty much like what these women feel https://abovethelaw.com/2019/04/jones-day-facing-second-class-action-lawsuit-over-fraternity-culture-of-the-firm/

Don't get me wrong. I think acting for Weinstein is fairly reprehensible. All I wonder is whether it is really deserving of a SRA disciplinary action. Ultimately, you are paid to produce the best result for the client. I would be very happy if they changed the law to make these terms illegal. As for the culture you describe, I work in-house in a predominantly female department and have no time for (nor do I really understand) that type of behaviour. Non-PC I am ok with but there is very clearly a line

Think it’s a regulation / code of conduct thing - maintaining public trust in the profession by not knobbling a vulnerable counterparty, both in terms of the clauses inserted but also the manner of any negotiation. Don’t think the STD will look at whether the agreement was legally valid . There are multiple conduct outcomes you have to achieve and with exception of confidentiality they don’t trump each other - so acting in your clients best interests doesn’t negate the need to show integrity etc.

NDAs can't be used to stop allegations of criminality to the authorities.

It was an abuse of power. Those clauses were unenforceable then as they are now. What is reprehensible is taking advantage of a vulnerable (albeit represented I believe, what WAS her lawyer doing) woman in that knowledge.

What anon who posted the Jones Day link said, except that I'm at Slappo's old firm.

It will be interesting to see what evidence supports the Jones Day claims.

What was he thinking?  I would have been troubled by my conscience which would have prevented me from doing it.  I suspect conscience was ignored so as to bask in the pleasure by fat ugly Harvey.  I hope the pat on the head was worth it.

Given that Perkins was legally represented 20 years ago, its strange that it was only the lawyer for Miramax who was referred by the SRA in relation to the NDA signed 20 years ago. Should be both or neither.

Surely if the NDA was signed under duress as claimed (although she did have her own independent legal advice) and us invalid as a result she should have to return the payment.

There's acting in your client's best interest and then there's bullying an individual with very unequal bargaining power into signing something that is grossly unfair. That certainly is a professional conduct issue.

Given that both sides were legally represented, it would need to be shown that one side was bullied into signing something which was grossly unfair. A substantial payment was made.

Kid - Daddy what did you do at work today?

Daddy - Oh, I played my part in silencing a woman about allege sexual harassment and rape.

Kid - I have my school project to write about 'what your parent does at work'. I'll include that.

the evidence in the Jones Day complaint. the similarities I find astonishing and relieved I   am not alone in this

Relieved not to be alone in what?

While not condoning the broad terms of the restriction at all, in the interests of a little balance, Imelda Perkins was legally represented at the time and paid $$$$$$$$$$$$$$$$$$$$$. It's not entirely one-sided.

I agree with previous comments querying why Imelda's own representatives aren't also under more scrutiny here if the restriction was so outrageous and the negotiations so unpleasant.

lol @ the a&o lawyers commenting on this above