A reader writes.... "The other day someone brought two trays of Crosstown doughnuts into the office.  I have the “kitchenette” in line of sight of my desk so I was able to see them arrive.  In this first few seconds I was able to get in there - say happy birthday to the generous giver - and get my prize back to my desk.  With a cup of tea.  I have to say it went down pretty well.  Creme Brulee, my favourite.


Most of my team are women and with the rise in price of ClassPass people are trying to get their the maximum value from that so I felt there was a window of opportunity to try more of the farinaceous fancies.


After about 4 minutes the email announcing the doughnuts went round. I was then able to go up again in the hubbub and join in the chat. Whilst we stood around the trays admiring the doughnuts I managed to get half of a Belgian chocolate truffle ring and half of a Chai Tea with Chai Glaze and Pistachios. Both delicious I must say but I was most pleasantly surprised by the chocolate one.  Having half a doughnut, I had it in my mind that the other half may be languishing later.


After lunch I was passing and I stuck my head in.  I had a Matcha Tea Ring (not as painful as it sounds). Whilst I was picking that up I stuffed the orphaned half of the Belgian Chocolate Truffle into my mouth. It turns out you can get half a doughnut in your mouth without even breaking step. 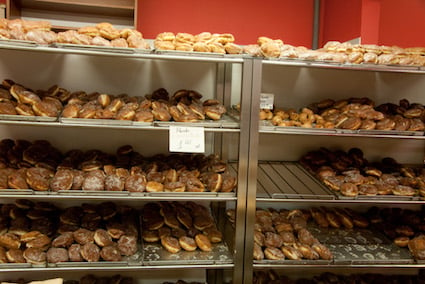 
Around 3pm I had a Vanilla Bean iced ring to cleanse my palate. I used a variation on the cutting in half tactic and had half as I poured my tea and the other half made it back to my desk, wrapped in some of the industrial kitchen roll, so as to make it look like I was perhaps mopping up a spillage at my desk.


About 45 minutes after that I saw my boss going into the kitchen so I wandered over to join her and get some quality face time.  I managed to work the doughnuts into the chat and suggested that we may as well try them, as we were there.  She said that as she was going to a class at Lomax she couldn't partake.  So I suggested I have hers and I ate it with what I hope was the look of someone who had never had one before.


At home time I was just gathering my coat and manbag and saw there were 2 left.  Raspberry Jam (a classic) and Chilli Chocolate.  I know enough about doughnuts to know that they wouldn't be as nice the next day so I took them home for my girlfriend.


My question is, how many doughnuts is too many?


P.s.  My girlfriend didn’t like the ones I took home so I ate them in the end.  Late that night for the first and at breakfast the next day for the second.  It’s true - they aren’t as nice on the next day."


Answer.  However many you have managed to eat when you are having your heart attack is too many.  (But I do agree the Creme Brulee is the best.) 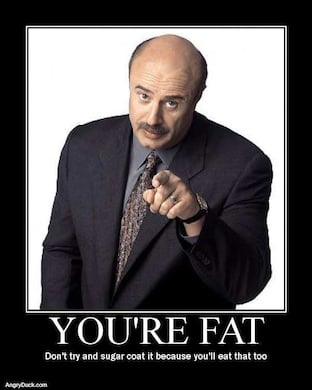 The trainee who I share an office with has really bad BO. How do I address this issue?
31
Vote up!
28
Vote down!