Skip to main content
The perils of calling a lawyer a bird at Bird & Bird
Bird & Bird performed fantastically well in the RollOnFriday Firm of the Year 2016 survey. There was a complaint from one associate, though, about the "endless references" to birds. "The canteen is the Bird Table, the newsletter is Bird Talk (or NestNews for internal stuff), the lawyers are Birds... and it goes on".

The scope for offence to be caused by the identification of people as 'birds' is large and obvious. Nonetheless, the firm's Twitter team flew right into precisely that jet engine when they recently congratulated six IP lawyers who had been recognised as leaders in their field:

Does that winky face indicate that the tweeter knew that labelling high-achieving female lawyers as 'birds' was a bit off, but the 2Bird style guide means they can get away with it? Or is it an embarrassed admission akin to, "I know this looks wrong but I work at 2Birds and I am forced to wrangle everything into bird-ese, this morning I told a stranger he had food on his beak oh God what is happening to me?"

We may never know. What we do know is that 2Birds' subsequent tweet didn't help: 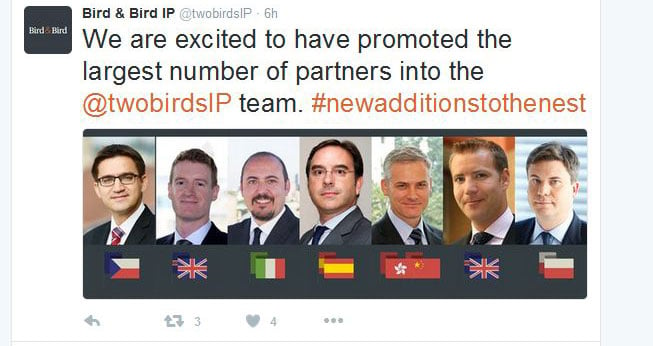 "Promotes white men around the world, calls women 'birds'", summarises a reader. "Bit tone deaf at the very least". Showing off a gallery of talented women who have been rewarded with exposure and then immediately following it up with a gallery of talented men who have been rewarded with actual money certainly invites unfortunate conclusions. But the bird criticism is complicated. Every lawyer at the firm is a 'bird', regardless of their gender. It is not used in the Benny Hill, Jim Davidson, Only Fools and Horses sense. The term refers to eagles. Blue tits. The humble sparrow. But if they were lawyers.

So it's harsh to blast the firm when a group of its 'birds' all happen to be women. It's like if a law firm was called Rapers Solicitors and referred to its staff as 'Rapers', and created a whole nomenclature around rape in which the canteen became the Rape Field, their trainees Rapeseeds, the coffee Rapeseed Oil and the end of the tax year The Plough, and then it tweeted, "Well done to our six rapers ;)" and got closed down for promoting sexual violence.

Like 'rapers', the 'birds' label is vulnerable to misinterpretation by outsiders. Bird & Bird's social media gurus aren't the only ones finding this out. Its lawyers also encounter disambiguation issues. An associate responding to the Firm of the Year survey bemoaned the "endless sniggering from estate agents when you give them your email address", adding "@twobirds.com really isn't that funny Mr Foxtons". The birds of 2Birds should stand firm. Unlike Rapers. Yes, it did exist. But when it merged in 2001, Rapers took the opportunity to change its name to SMR Solicitors. Sad, but probably wise.
Category
Feature

The whole bird theme is overly cutesy and juvenile, especially for an international law firm. What might work in-house really isn't appropriate when broadcast to the rest of the world. One does have to ask why the newly made-up partners aren't referred to as birds.

What a lot of po-faced, pompous drivel. You've certainly chosen the right profession.
17
Vote up!
12
Vote down!
anon 00:34, what you've done there is you've read 'rape' and jumped to conclusions...which is I think the point of the article?
12
Vote up!
11
Vote down!
@anon one should get out more.
9
Vote up!
10
Vote down!
started off OK, then (crash) landed killing all passengers on board!
11
Vote up!
14
Vote down!