As Trump's favoured spinner, who spent her days defending the Idwig's spoutings.

As a sleep-deprived factotum, condemned to be ready 24/7 with slap and a nice frock and a batshit defence whenever her boss tapped out an incensed 3am truth rocket blasting Saturday Night Live.

As a strategic genius who realised that justifying the unjustifiable required her to fight Trump's fires by setting herself aflame.

As the person who most eerily resembles a South Park cartoon character.

As a wildly incorrect humanoid babelfish who achieved infamy by offering "alternative facts", right up until the bombs fell, which she said were just big drops of explodey rain. 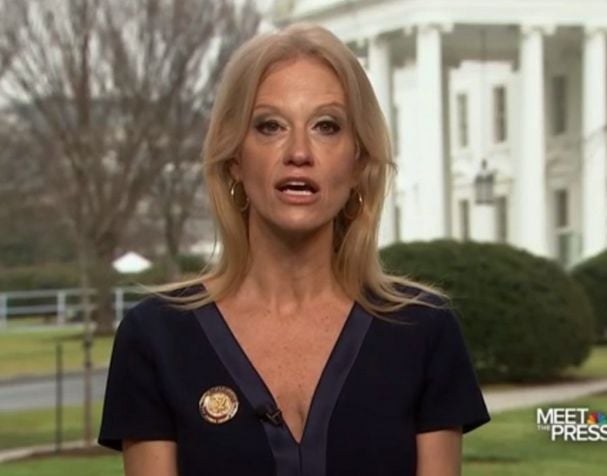 As a woman who, on television, appeared to bleed from the eyes, more and more as the weeks rolled by, until she resembled a melting miracle statue, waterfalls of blood pouring down her face, terrifying viewers as she insisted that President Trump's approval ratings were not the lowest but in fact the highest of any President in the history of the Republic, twin jets of blood arcing across the screen, until her television appearances became logistically impossible because cameramen were flailing in a pool of blood in the studio and Conway was bobbing around, spinning faster and faster as the blood shooting from her eyes propelled her in circles, which made it difficult to pick up sound.

They will portray her as all of these things, but also, one hopes, as a wife and mother. 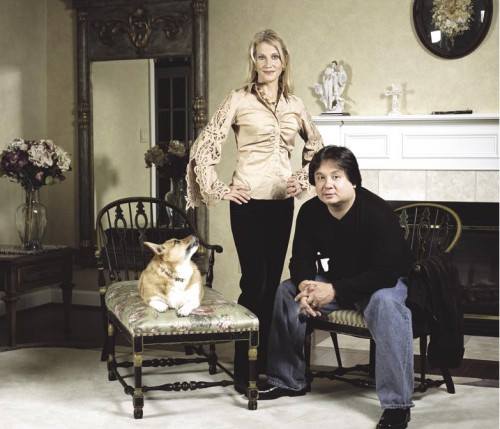 And the curious historian should wonder, who would marry such a dedicated agent of dangerous fiction? And by the way, who is that manspreader in ill-fitting jeans? The answer to both is a US lawyer, and aside from the outfit he is an excellent match.

George T Conway III is a partner at US firm Wachtell. A litigation lawyer, in 1995 he achieved a great victory acting for cigarette company Philip Morris when it brought a defamation claim against ABC News. ABC settled, paying costs of over $2.5m and agreeing to apologise twice on air for claiming that the tobacco manufacturer manipulated nicotine levels to addict smokers. Which, like the chunks of tarry lung Philip Morris' customers cough up, must have stuck in the craw.

Mr Conway is a member of a group of conservative lawyers called the Federalist Society, and was part of a second, secretive group of conservative lawyers who fought to bring down Bill Clinton in the 1990s with a series of lawsuits. The New York Times reported that Mr Conway was particularly clandestine, keeping his name off the suits to avoid getting into trouble at Wachtell, where "influential Democrats" like Bernard W. Nussbaum, a former White House counsel, are also partners. But he also does pro bono work, albeit of a particularly conservative bent. His profile on the Wachtell website boasts that Mr Conway successfully fought to deny prisoners in New York State jails the right to vote on behalf of victims of crime.

So hopefully historians will record that Conway, who is also a lawyer, was not just a narcissist's fizzing liebot, but one half of a legal power couple. And if the Trumpocalypse leaves only fragments of this world and one of them is this photo, historians will also conclude that they were royal: 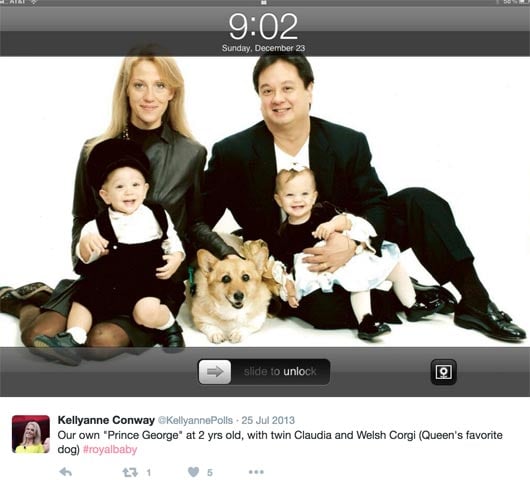 Those jeans are outrageous.
7
Vote up!
6
Vote down!
these jeans look like prison apparel - he probably wore them to get into the mindset of inmates who want to vote - "method lawyering"
8
Vote up!
10
Vote down!
Why do morons send out pictures of their lock screen? You have the original photo on your device, why are you screengrabbing?
9
Vote up!
9
Vote down!
Is she leading a double life? In the other one shes married to Walter White?
11
Vote up!
10
Vote down!