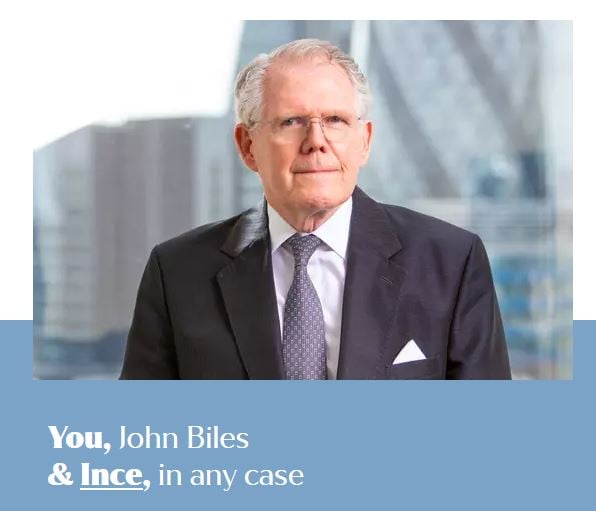 Don't worry, you can lose him by going into Cora.

John Biles, Ince's head of finance, is resigning from the firm after a chef claimed he had banned a man understood to be Biles from his restaurant, because the individual’s guests allegedly mistreated a 22-year-old waitress.

Multiple sources identified the leader of the misbehaving party as Biles. RollOnFriday attempted to contact Biles and sought comment from Ince, but did not receive a response.

Chef Lee Skeet tweeted a letter he sent to the person understood to be Biles, in which he informed the individual that they had clocked up the "biggest bill" that Skeet's restaurant, Cora, had "ever seen".

But Skeet wrote that Lily O’Connor, a waitress who runs front of house at the 12-seat venue in Cardiff, was "talked down to, disrespected, and touched unwantedly by members of your group". He added that the customer understood to be Biles also "left no tip". Skeet wrote, "I would thank you to never come back to my restaurant".

In his letter, Skeet said his conversations with O’Connor in the aftermath of her treatment by the man’s party "break my heart, make me feel like a shit employer, and a terrible dad having my own daughter".

Skeet initially offered to refund the individual his entire bill of £1000 to cement the ban, minus £100 which he said the customer "should have tipped Lily". However, he had second thoughts. "On reflection I reacted too quickly and emotionally last night", said the chef on Twitter. "I'm not going to refund the customer's money. I've instead kept it and transferred to Lily".

"I also think you should assess the people you surround yourself with", Skeet wrote. A source close to the restaurant told RollOnFriday that Biles, who is 82-years-old, did nothing wrong himself, and that it was his guests who behaved poorly. ROF understands that one of the six male guests was the primary culprit. 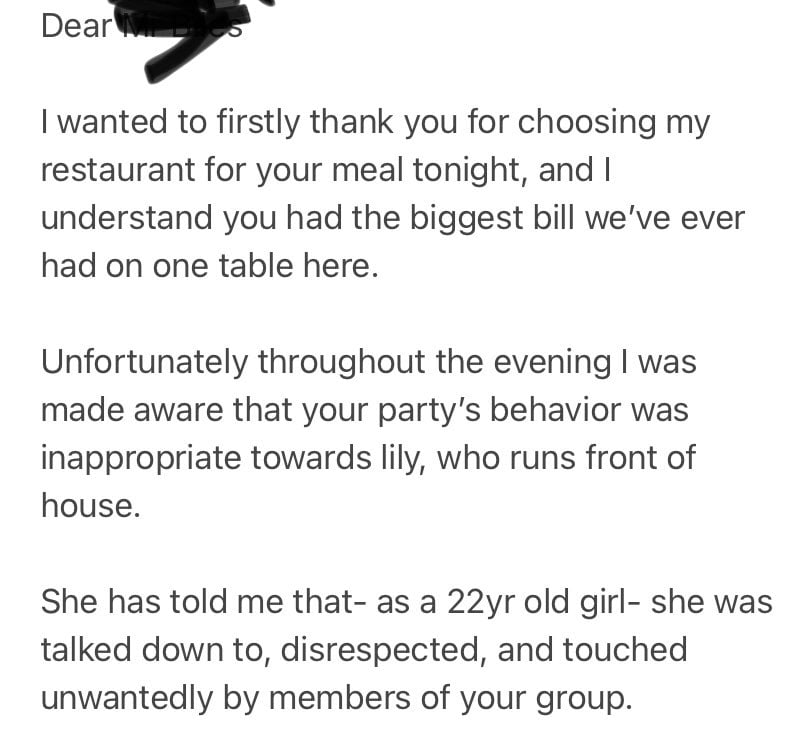 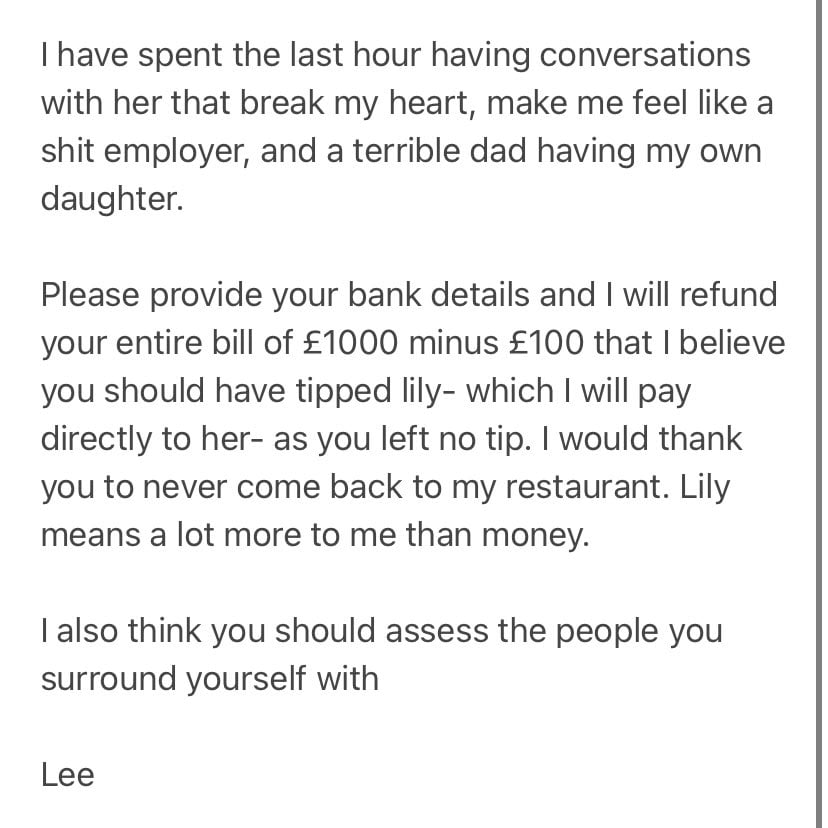 "We should start calling out rich people who think they can treat people like crap", Skeet said on Twitter. His post went viral and was picked up by the press, although Biles was not identified.

"The second they walked in, it was bad energy", Skeet told WalesOnline. "It's not like they insulted her or anything like that - she was just noticeably upset every time she came back in the kitchen."

One of the diners advised O’Connor to work seven nights a week if she wanted to make a “living” salary, reported the Daily Mail. She said,“He used humiliating tactics, trying to degrade me for the job I love doing”.

Biles, who is Ince's Head of Finance & Administration, quit the listed firm after the alleged incident, and an internal note was circulated on Thursday informing staff that he was retiring. Chief Exec Adrian Biles (related) told staff, “John will transition out of the business over the next 4 months” and would resign from his various positions at that point. 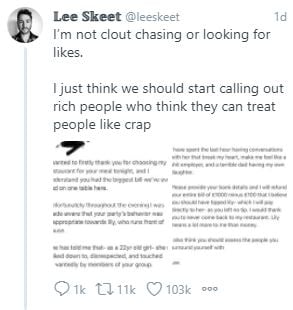 Several members of the Biles family occupy senior positions at the business, which used to be called Gordon Dadds until it snapped up Ince when the august shipping firm collapsed. Adrian Biles became a multimillionaire when Gordon Dadds listed, while Robert Biles is a corporate partner based in Cardiff.

The others in the group should resign also.

Who else was there? Given it was in Cardiff, I would be surprised if his son wasn’t

The limited times I met him I couldn’t leave the room quick enough. Good riddance!

will Ince ever be in the press for good reasons?

I have noticed that most Ince articles are negative.

Something at that firm needs to change.

I trained at Ince and I had a truly miserable time there. Happily now at a wonderful firm with a great team and excellent training. There is life beyond Ince and a career in law is great (I now realise).

To the original @Inceescapee, I can totally relate. Life is way better outside of that place. It was only ever about the partners’ favourites. Those were the only ones that had some sort of career progression. I also wonder who instructs them these days?

If true - and there needs to be a proper investigation- the person or persons who were responsible should be fired and reported to the SRA for beaches of the Code of Conduct.  Totally unacceptable.

How long can Ince carry on surviving for?  After numerous exoduses they have about 3 good lawyers left.  Will they now appreciate that loyalty should only go so far?

Worst company I’ve ever worked for. So glad I’m not there any more.

Worst company I've ever worked for too. Leaving was the best thing ever.

Sounds just like another law firm that claims to foster a working environment based on collaboration and mutual respect, where everyone is trusted to do their very best work in the way they see fit. Total BS in my experience. Toxic place.

After banning their workforce from discussing Ukraine, I suspect the Russians are instructing them!

Not sure the two are linked.

The once great Ince brand has been trashed.

He sounds splendid. My sort of chap!