I can confirm that David Bickerton will be Clifford Chance’s next Senior Partner.

Of course I had previously confirmed that the role would be filled by Jeremy Sandelson. And it would have been, had Jeremy not pulled out of the race. Presumably he’s worked out that he’s got better things to do than spend half his time on a plane to the Perth office, attempting to dissuade Bruce Nomark and his team from defecting to a competitor, and the other half in a dinner jacket at the worshipful company of swine herders making small talk with the owner of a shoelace factory in Guangzhou.

David has no such reticence. He asks not what his firm can do for him but what he can do for his firm. After a lifetime behind the mast he is now prepared to give back, clock up the airmiles and dust off the tux.

I mentioned that a rival candidate would emerge from continental Europe. Two have – not Horst from Cologne but Yves from Paris and Jeroen from Amsterdam. Close enough… I don’t know them, I’m sure they’re sound as a pound. But Yves was unsuccessful when he ran against Matthew Layton for Managing Partner four years ago and his dance card is now looking a little tatty. Jeroen seems a better bet (although as Michael Caine said in Austin Powers, “there are only two things I hate in this world. People who are intolerant of other people's cultures and the Dutch.”) But David is the most reasonable choice. He has run the firm’s largest office with notable success for eight years, ramping up both profits and reputation. CC was always the poor man of the Magic Circle – as my supervising partner used to sneer, “the biggest, but ever so slightly blue collar”. Under the triumvirate of Sweeting, Layton and Bickerton it may not have reached the aristocratic heights of Slaughter and May but it’s certainly upper middle class with a rectory in the Cotswolds and Christmas in Antigua. 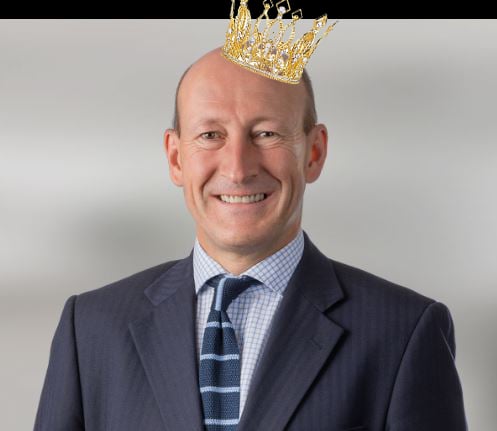 His appointment is all the more important given Brexit. CC’s profitability (and that of all big firms in the City) depends on contracts continuing to be governed by English or New York law. Senior Partners at other firms have told me that they’ve recently seen a trend of lawyers in Frankfurt or Paris pushing for their own jurisdictions. This needs to be resisted. London and New York are the legal centres of the world. This has not changed since the 2016 referendum – City firms have been posting record results – and it will not change after March next year. London still has the best, truly independent, non-political judiciary in the world (cough, Kavanaugh, cough), it is where big business wants to live, work and litigate.

And, finally, he’s widely regarded as a properly decent guy. Certainly by me – I declare an interest, we’ve been great friends for nearly a decade. Unassuming and entirely lacking in pomposity, he’d blush to read this. But when he tips up at a drinks party everyone makes a beeline for him because they know they’re going to have a great evening. He’ll probably spend more time sharing jokes with the wine waiter than brown-nosing the head of Deutsche. That sounds like a Senior Partner to me.

And he is cut from the same cloth as Stuart Popham, who was a cracker of an SP.

Will Jose Mourinho be sacked in the morning as well?

Was it Bickers who used to have the front end of. Jag MkII (complete with working headlights) mounted on the front of his desk in Aldersgate Street?

just to confirm: yes, Jose Mourinho will be sacked in the morning.