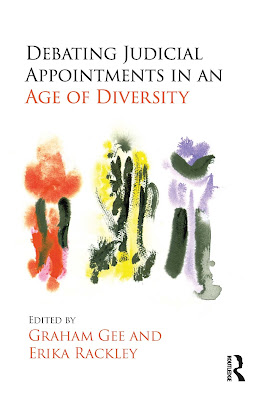 Are you bench-fit? There's a handy 'Am I Ready?' guide on the Judicial Appointments Commission website.

I picked up this tip in Debating Judicial Appointments in an Age of Diversity (Routledge, £115) edited by Graham Gee and Erika Rackley. These essays by the great and good and their observers commemorate the tenth anniversary of the JAC. The writers spotlight key questions, such as the level to which judicial appointments should be political.

And what is merit? Sir Thomas Legg, former Permanent Secretary to the Lord Chancellor, writes: 'We appear to owe the concept of merit for public appointments originally to the Chinese Civil Service in the Qin and Han dynasties.' I would like a whole chapter on this, with sample exam papers and ink drawings of Confucius, but it is not to be.

Legg expresses doubt about lay members of selection committees: 'For many reasons, lay members are often likely to defer to their judicial colleagues in these decisions.' This is countered by Jenny Rowe, the first Chief Executive of the Supreme Court: 'The judges were always very respectful of these levels of expertise and welcomed the perspective offered by lay members. Indeed, in a situation where inevitably many of the applicants were known to the judges, the lay members were well placed to identify and probe issues which may not have been so apparent to those more familiar with their day to day work. There was no shortage of lively discussion and debate, and no question at all of the lay members being supine.'

Sadly, proof-reading budgets are slashed nowadays. For example, page 34, with its three references to the 'Prime Minster' [sic], sounds the Proof-Reader Attention Deficit Alert (PRADA), pointing to that trippy state in which subconscious urges to be skimming Vogue over-ride what you see. But cost-cutting doesn't allow for a second proof-reading and sometimes not even a first.

Uncritically, I would say that the best bit of the book is Appendix IV - included in Amazon's free preview - which is about how I came to draw the cover illustration. I'm indebted to Christopher Allan, Court and Ceremonial Manager at Ede & Ravenscroft, for giving me a close-up view of the robes in his care, groomed like champion race-horses.

If you think you're hard enough for the bench, then - even without issues of diversity - you'll be interested in the matters this book raises.

Coda: if you prefer the soft and fluffy, may I recommend The Supreme Court: A Guide for Bears.
Category
Feature