It was an emphatic victory. The seven partner firm excelled in every category and scored a whopping 91% overall. Employees rated it particularly highly for career development opportunities, resulting in a 95% score. The firm also scored highly for management openness, no doubt helped by Marque's egalitarian "six monthly random allocation of open plan cubicles for all staff" policy.

Marque workers said they were "happy to come in every day" to an office which "allows you to be yourself" and where people are "always laughing". However the firm wouldn't be for everybody as it has music playing in the office all day - although current staff seem convinced that the work of the Artist Formerly Known As Prince somehow helps with their drafting.


During the day there are "chocolate treats" and, er, "squirms," and there's a "4pm pens down on Fridays" rule - apparently often followed by dancing and drinking in the office until the early hours. "God, they can order an awesome Jäger Train" says one contributor.

A delighted spokesman said "It just goes to prove that the recipe for success in law is exceptional people, a genuine commitment to cake and a freezer full of vodka. Thanks RoF, we couldn’t be more chuffed". 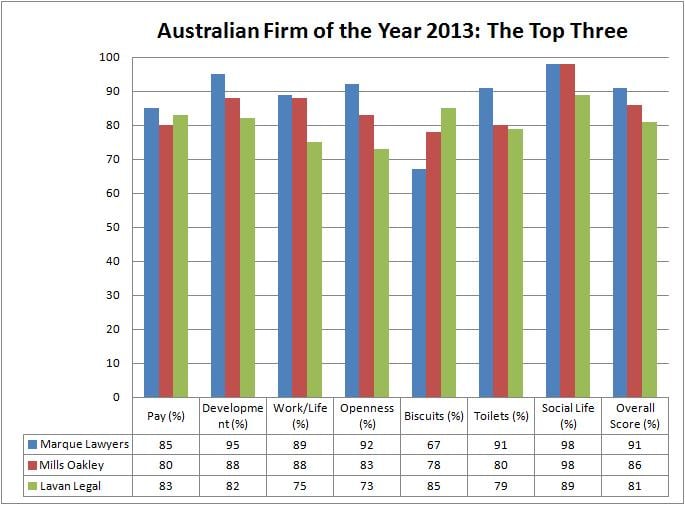 But spare a thought for Mills Oakley, which has now been pipped at the post three years on the trot. It scored a very respectable 86% and happy campers reported a "really positive feeling which has infused the whole firm". Although one lawyer still shudders at the memory of the partner who "insisted on "milking" a male turkey (by hand) in the animal husbandry shed before accepting instructions". Better luck next year, and good luck with the therapy too.

Click here for the full results table and there'll be a more detailed breakdown of all the firms' performances next week.

Squirms - http://www.thenaturalconfectioneryco.com.au/Whats-in-the-range/Sours/Sour-Squirms.aspx
5
Vote up!
7
Vote down!
Interesting to see the number of responses as a proportion of fee earners. Marque Lawyers are well known self promoters so take it with a grain of salt really.
5
Vote up!
5
Vote down!