The co-chair of US law firm Willkie Farr paid $75,000 to bribe an exam invigilator to take his daughter's college entrance exam for her, according to charges brought by the FBI.

Gordon Caplan, who is also a member of the firm's Executive Committee and a partner in its Private Equity practice Group, is one of several rich parents in the US who were arrested for paying a sham test prep business, called 'The Key', to cheat their children's way into college. Caplan was released on bail set at $500,000.

William Singer, who ran The Key, offered two schemes to unscrupulous parents. The first required children to fake learning disabilities. Under those circumstances, they became entitled to take their exam privately with extra time. The Key arranged for the exam to be taken at one of two schools it controlled, where the invigilator was bribed to either take the test for the child, or correct their answers once they left. 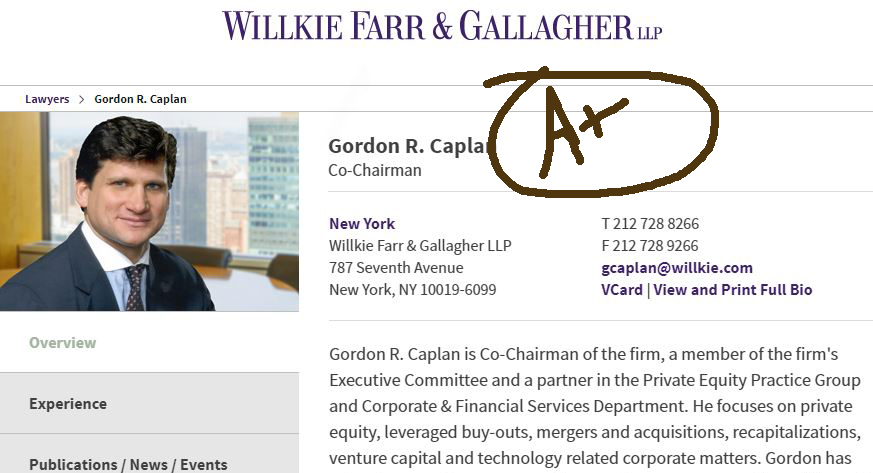 The second scam saw children pretending to be sports prodigies to obtain athletic scholarships. Their applications were supported by photos taken by parents of the children dressed up as rowers, sailors, water polo players and even pole vaulters. In at least one case a child's face was photoshopped onto the body of a genuine athlete. College sports coaches were bribed to wave through the enhanced applications.

After the FBI uncovered the scheme, it secretly recorded Singer's calls to his wealthy clients. Caplan was captured in sensational wiretaps agreeing to get his daughter to pretend to be "stupid" so she could take her exam privately. Singer suggested that all the rich kids were pretending to be disabled to get extra time.

SINGER I also need to tell [your daughter] when she gets tested, to be as, to be stupid, not to be as smart as she is. The goal is to be slow, to be not as bright... What happened is, all the wealthy families figured out that 'if I get my kid tested and they get extended time, they can do better on the test'. So most of these kids don’t even have issues, but they’re getting time. The playing field is not fair.
CAPLAN No, it’s not. I mean this is, to be honest, it feels a little weird. But.
SINGER I know it does. I know it does. But when she gets the score and we have choices, you’re gonna be saying, 'okay, I’ll take all my kids, we’re gonna do the same thing'. (laughing)
CAPLAN Yeah, I will.

Caplan embraced Singer's explanation that once his daughter was registered with learning difficulties, she would be able to benefit from an unfair advantage throughout college.

SINGER Here’s the great thing. When she goes to college, she gets to bring this report with her and she’ll get extended time in all those things in whatever  school she goes to, which is huge again. She’ll get all the accommodations when she gets to college as well.
CAPLAN Huh.
SINGER Which will be really helpful.
CAPLAN Okay, okay.

Caplan was keen to establish that his money would get him a bribed invigilator and the exam scores and college of his daughter's dreams.

CAPLAN Okay, so let me let me understand the two components. What is the, what is the, the number?
SINGER So the number- the number-
CAPLAN At Cornell for instance.
SINGER Well, hold on a second. The number on the testing is $75,000. Okay? It’s $75,000 to get any test scores you would like to get on the SAT or ACT. Okay, that’s-
CAPLAN Explain to me how that works.
SINGER I just explained it to you. You get extended time, you gotta get the extended time first. Then you’re going to fly to L.A. And you’re going to be going on a fake recruiting visit. You’ll visit some schools, while you’re out here in L.A. And then on a Saturday, which is the national test day if it’s ACT or SAT, she’s going to sit down and take the test...My proctor would then answer her questions, and by the end of the day, she would leave, and my proctor would make sure she would get a score that would be equivalent to the number that we need to get.
CAPLAN Okay.

The $75,000 was structured as a donation to The Key's foundation, which, in a hideous irony, claimed to help underprivileged children. Because the bribe was dressed up as charitable giving, Caplan was able to make the payment tax-free. He seemed very happy with it all.

CAPLAN Well again, thanks for taking the time earlier today. Look, I’m particularly interested in working with you guys and figuring out what’s best for [my daughter]. She’s an interesting kid. I’m sure you’ve seen them all. But this notion of effectively going in, flying out to L.A., sitting with your proctor, and taking the exam is pretty interesting.
SINGER It’s the homerun of homeruns.
CAPLAN And it works?
SINGER Every time. (laughing)
CAPLAN (laughing)

If proven in court, the scam may cost Caplan his marriage as well as his career and his freedom. The calls reveal that Caplan pushed ahead with the plan even after his wife expressed discomfort with Singer's proposal that someone should take all their daughter's online classes for her as well. When his spouse said she had a “problem with that”, Caplan took her off the call and spoke with Singer privately.

CAPLAN It’s just you and me. Is that kosher? I mean, can we?
SINGER Absolutely, I do it all the time man. I do it all the time for families and then we take college classes for kids, you know, online to raise their GPA. Because again, it’s not, nobody knows who you are ’cause you’re, you don’t take a, there is nothing that, you know, is filmed when you take your test and everything, that’s what’s so great about it. So that’s why I asked.
CAPLAN Is, let me put it differently, if somebody catches this, what happens?
SINGER The only one who can catch it is if you guys tell somebody.
CAPLAN I am not going to tell anybody.
SINGER Well. (laughing)
CAPLAN (laughing) Done, done, not a problem.
SINGER She’ll, she’ll think, right, she’ll think she took it. She’ll feel good about herself.

In July 2018, on her third attempt, Caplan's daughter successfully persuaded a psychologist that her 'learning difficulties' merited a private invigilation.

CAPLAN So [my daughter] did get the extension. Totally unexpected. We got it last night.
SINGER Really?
CAPLAN Yeah.
SINGER That’s cool. Cool.
CAPLAN Yeah. And you were right. I mean, it was like third time was the charm. So everybody was telling us there’s no way, and then all of a sudden it comes in through [her school]. So, again, and - keep in mind I am a lawyer. So I’m sort of rules oriented.

Throughout the calls, perhaps because he was "rules oriented", Caplan repeatedly sought assurances from Singer that they wouldn't be found out.

CAPLAN Yeah, I, I hear ya. It’s just, to be honest, I’m not worried about the moral issue here. I’m worried about the, if she’s caught doing that, you know, she’s finished. So I, I just-
SINGER It’s never happened before in twenty-some-odd years. The only way anything can happen is if she-
CAPLAN Someone talks-
SINGER Yeah, if she tells somebody. And that’s why even on the payment to the school thing, nobody, we never tell the, you know, she just needs to know that you’re gonna get some help on this class.
CAPLAN Correct.
SINGER She’ll be more than happy.
CAPLAN Oh yeah, I, she, she won’t talk.

Unaware his words were being recorded, Caplan explained to Singer that if the fraud was exposed, he would claim ignorance.

CAPLAN But what I’m - what I’m asking is, is there anyway for this to get back to [my daughter] or to the family? I mean, this comes out - I - I don’t even want to know what you guys do.

On Thursday Willkie Farr wiped Caplan's profile from its website. In a statement announcing his surely-impossible-to-come-back-from departure, it said, "This is a personal matter and does not involve Willkie or any of its clients. In light of the seriousness of the matter, Mr. Caplan has been placed on a leave of absence from the firm and will have no further firm management responsibilities".

Willkie supports several organisations which do help underprivileged children, including the Inner-City Scholarship Fund, the New York State Mentoring Program and Prep for Prep. RollOnFriday asked Willkie Farr to comment on its chairman using his wealth and privilege to cheat a less fortunate candidate, such as someone who took part in one of those programs, out of a college place. It did not respond. Neither did Caplan.

The FBI's transcripts of Singer's conversations with entitled parents, including William H Macy (sob), is worth a read.

I wonder what made him think this was a good idea? Surely most parents would rather their children fail than cheat? What is the point in getting something you cheated to get?

"I also need to tell [your daughter] when she gets tested, to be as, to be stupid, not to be as smart as she is. The goal is to be slow, to be not as bright..." Well, if she wasn't bright enough to take the test herself in the first place then she probably didn't need to act.

And Caplan's description of his own daughter "She’s an interesting kid." Wow, just that right there, what a father.

Must be weird working at Willkie Farr right now and reading how the head of the firm, who endorsed its preaching about diversity and inclusion and the elite helping the less fortunate, was engaged in furtively rigging the system even more to help his own. All the outreach, just window dressing and lip sevice. He didn't believe a word of it.

As someone who, during the GDL, was diagnosed with dyslexia that had held me back throughout my school career, this kind of thing really makes me angry. It totally undermines the extra time I received, which was backed up by a (first time) clinical psychology report.

I hope they all get lengthy prison sentences.

Just read the entire affidavit. This lad is absolutely turbof*cked.

As a famous athlete once said...

I know of several people who had doctors write them bogus medical reports (supposed learning difficulties, anxiety, dyslexia etc.) they then used during the LPC to get extra time and other benefits, to ostensibly get ahead.

These people got distinction-level marks and now work at large City law firms.

"Paid $75,000 to bribe an exam invigilator to take his daughter's college entrance exam for her"; that certainly brings new meaning to the award given by American Lawyer of "Dealmaker Of The Year" to Mr. Caplan.

This is the same firm whose London office was the subject of #gobblegate. What a shambles.

Really, people cheated on the LPC @FYI? I can't imagine a worse waste of money, and anyone doing that has more money than sense. On reflection, I suppose that is the point...

Disappointing, but not surprising. This sort of thing has been going on for years. At Uni there were heaps of kids of wealthy parents randomly diagnosed with dyslexia etc and given extra time / private rooms for their exams. It's a lifetime of being pampered and being made to feel like they're somehow more deserving than the rest of us. It's nice when karma pays a visit!