At Two Birds the hours are "seemingly much better" than "any other firm of its size" says a trainee, delighting in the absence of manacles or nocturnal photocopying sessions. A seasoned senior associate agrees the hours are "decent". Mischon de Reya comes joint second with Field Fisher Waterhouse, both boasting solid 86% scores.

It was a particularly dramatic improvement for FFW. The firm came fifth overall this year after coming third from bottom overall in 2013. What could possibly be responsible for such a turnaround? New Managing Partner Michael Chissick, it seems. Tens of pliant monkey butlers happy staffers write in giving Chissick as the reason for their high scores, calling him "personable", "very normal", "top", "excellent", "amazing", "exceptional", "committed to sharing" - ample compensation for any late nights.

But most firms who did well have no secret weapon (although Shoosmiths has a nice touch: "giving you the day off on your birthday"). They simply promote a reasonable approach to work, and don't provide too much of it. At seventh-placed Ince & Co, for example, there is "no macho environment encouraging late nights for the sake of it - if there is work to do you stay and do it, but if you are doing it all the time you just seem badly organised". 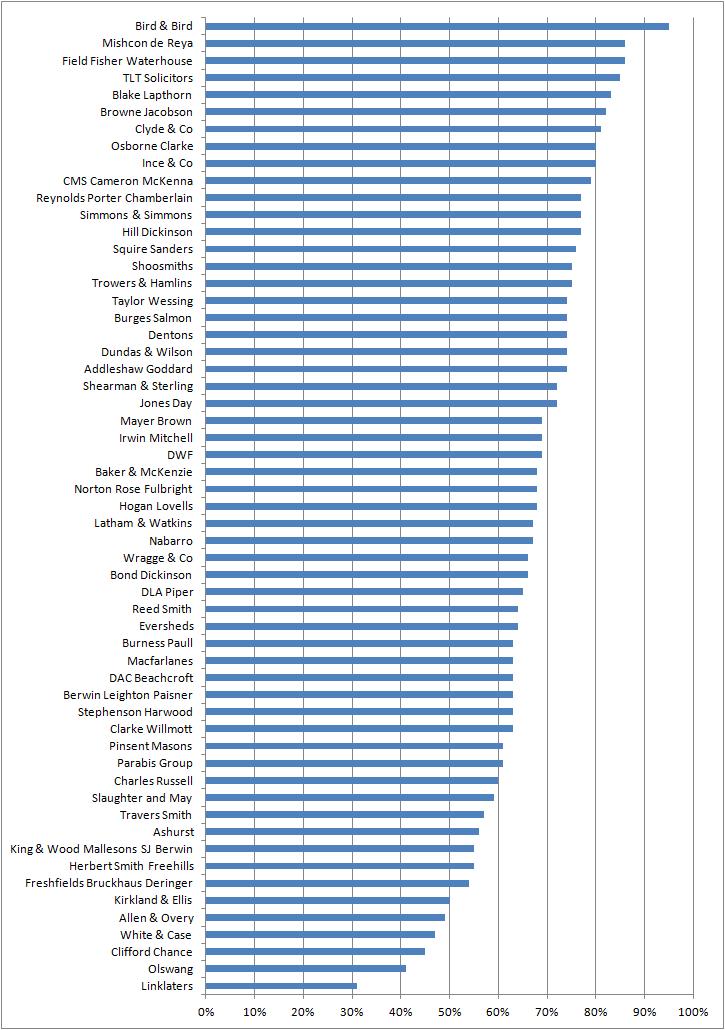 But for some firms 'reasonable' only exists in the text of that foot-thick development agreement to be proofread by dawn. Firms like Linklaters, which is caught squatting at the bottom of the table for the second year running. It scored a dismal 31%. A "horrid work-life balance", says one Links lawyer, although what "really pisses people off in our group is that we are constantly promised improvements, changes for the better...but it doesn't really translate to actions". Management, says another, "is brutal to anyone not hitting targets".


The other Magic Circle firms don't fare much better. At Clifford Chance (third from bottom, just above Olswang), there is the "expectation that you check in your personal life at the door". Why? Because "this is CC. It is an extraordinary and stimulating environment - as long as you want your career to revolve around a complete devotion to clients, a diet of work, an intolerable requirement to monitor email all the time and an overwhelming desire to crush any competition". Maybe the Freshfields junior is right: anyone expecting work-life balance from a top City firm, they say, is "probably taking some mad hallucinogenic drug".

By comparison, Golden Turd winner Parabis did rather well (61%).
Tip Off ROF