The four Inns of Court have clubbed together to launch a Bar Professional Training Course which aims to "break down the risk" of becoming a barrister and undercuts established BPTCs by thousands of pounds.

The course is being launched by the Council of the Inns of Court (ICCA), a barristers' education charity funded by Lincoln's Inn, Inner Temple, Middle Temple and Gray's Inn. It has applied to the Bar Standards Board to deliver a new Bar Course which, it boldly states, will "replace" the BPTC.

Before being accepted, candidates will need to pass written and oral tests, and an interview. Speaking to RollOnFriday, James Wakefield, Director at the ICCA, said the tests would "replicate the standard expected for a pupillage".

Part one of the two-part course covers criminal and civil litigation and is completely online. Designed to take between three and four months to complete and incorporating "multimedia resources such as films, podcasts and quizzes", it can be undertaken anywhere at anytime. Contrasting with the requirement of other BPTCs for students to sign up to the entire course at a cost of approximately £20,000, ICCA students can pay £1,575 for part one with no further obligation. Derek Wood QC, Chair of the ICCA Governors, said the not-for-profit's course was designed to provide "greater flexibility" and "less financial commitment upfront".

If students decide they do still want to become barristers, they can pay £11,520 for part two, which will comprise a 20 week course covering advocacy, ethics, opinion writing, drafting, research and mock trials. Held across the four sets' training facilities, Wakefield confirmed the premises would include The Ashworth Centre, Lincoln's Inn's new, multi-million pound, state-of-the-art bunker. 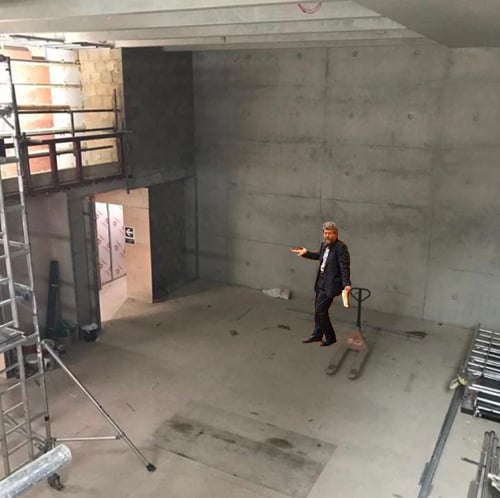 Lecturers have been practising in secret for months.

It's currently still under construction. Containing 10 classrooms and a 150 seat lecture theatre, the two storey underground base was due to open last November and was officially opened by the Queen in December, but delays mean it is now not expected to be ready until the summer.

The first ICCA course, set for an intake of 240 students, is intended to start in Autumn 2020. Its approval appears certain given the calibre of its fans. "As the Approved Regulator, the Bar Council welcomes greater competition in the market", said Richard Atkins QC, Chair of the Bar. “The proposed ICCA course also seeks to drive down the cost to students of qualifying for the Bar and this is also something that the Bar Council encourages”.

At £13,095, the ICCA's course is approximately 30% cheaper than the BPTC offered by University of Law (£18,735), City University (£18,500) and BBP University (£19,070). Asked about the new kid on the block's appealing price point, ULaw declined to comment. A spokeswoman for BPP Uni said, “Our current BPTC programme is predicated on a different learning model from the ICCA’s, including face to face teaching to help students learn for and pass the centralised assessments”. She said student feedback indicated it was a “well-received model”, but added, “We are now in the process of evolving our Bar Training to reflect the BSB’s regulatory changes”.

They have to pass tests? In 2019? This is appalling discrimination.