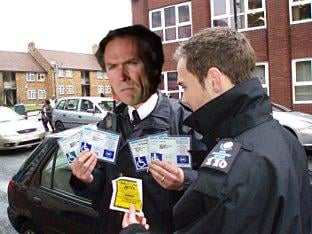 The Solicitors Disciplinary Tribunal has struck off a solicitor for using a family member's 'Blue Badge' to shave a bit of time off his walk to work.

Wahid Nazari worked in the Sussex office of personal injury firm Carpenters at the time. He was also the primary carer for a relative, Person A, who had a legitimate Blue Badge, which is reserved for use by a disabled person.

Nazari was convicted at Lewes Crown Court in 2019 for dishonest use of the Blue Badge, and was fined £1,500 and ordered to pay costs of £6,000 after he was deemed to have used the badge for his own purpose on "at least eight" occasions between June and August 2018.

On one occasion, Nazari dropped off his relative, drove to work, and parked on a single yellow line near to the office. Inspectors spotted Nazari's car was parked in a restricted area, with the Blue Badge displayed on the dashboard.

The solicitor told the inspectors that he intended to collect his relative from the nearby train station and take them to Brighton after he finished work. When the inspectors ascertained that the relative was some distance away, they confiscated the Blue Badge.

“For the sake of not moving your car, or not parking it up at the free space and walking down, you have got yourself into this mess," said the judge at Nazari's Crown Court trial. But the judge also noted that Nazari deserved "credit" for being the primary carer for Person A.

In his appearance before the Solicitors Disciplinary Tribunal, Nazari said he had "an honest belief that he was entitled to park" in the restricted area, and stated that he'd made an "honest mistake". He also argued that the offence was unrelated to his professional work. He denied dishonesty, and asked the tribunal to view his personal circumstances and also the judge's comments as "exceptional circumstances".

However, the SDT said that Nazari had acted dishonestly, and did not find the circumstances to be exceptional "unfortunate though they were," and struck Nazari off the roll.

It is the second time in recent months that the SDT has dealt with a solicitor misusing a Blue Badge.

Want to have a say about your firm? Take the survey below.

Ok, he was dishonest, I get that. But how can this warrant strike off when senior management in my firm were caught red handed falsifying appraisal records to reduce pay of lawyers who were out of favour and NOTHING happened to any of them.

I MADE A (DIS)HONEST MISTAKE

"Nazari said he had made an "honest mistake""

What does he consider honest mistake to mean? Did he think he was allowed to use the blue badge?

"senior management in my firm were caught red handed falsifying appraisal records to reduce pay of lawyers who were out of favour and NOTHING happened to any of them."

Was it reported to the SRA?

[email protected], I do not know for sure if the SRA were told because whenever any of us asked the partners about it we were told they could not discuss it with us and it was frankly made clear to me that it would not be good for my career progression if I asked again. I heard that the firm did make a report to SRA but it was pretty much “nothing to see here - move on please and go focus on that trainee who panicked and backdated a document……”

I know we're all entitled to a presumption of innocence etc but, seriously, who thinks its worth the Crown Court's time for something like this? He copped £6k in costs, which seems quite excessive but I'm not an expert on the Lewes circuit.

But good to see the SRA going after the big fish. The public is definitely better protected now that this person is off the books. And Lewes Council's outsourced parking inspectors can celebrate tonight ... as long as its before 4:30pm/end of shift.

Another BAME solicitor struck off by the SRA.

Do you see now why the world considers England to be such a racist laughing stock?

@Anon - you wibble on about this tale every week.

Nobody cares. The SRA are not going to read these comments, revisit your case, and finally give you the 'meeting expectations' mark you think you deserved in your third seat appraisal.

You weren't cut out for Property Litigation. Move on.

Well done SDT - you have deprived a primary carer of his livelihood. Yet you did nothing when a managing partner was caught arranging a backhander to ensure that his firm's assets went for an agreed price to a certain buyer, costing creditors millions.

If it had been the BSB I am sure that this chap would have been cleared of all wrongdoing.

[email protected]:25 are you saying that the authorities should have made a decision not to prosecute him for his crimes because of his ethnic background? There's a word for that sort of attitude.

Wahid Nazari is an intelligent person. He knew what benefits a Blue Badge would give. The problem is he is not a disabled person. He broke the law. He should not be in the legal profession. He could appeal any decisions.

Why is it the SRAs business where you park?

[email protected]:43. It's not. What is the SRA's business is whether you've been convicted for a deception offence.

It used to be lax controls over client account payments that brought out the dishonesty in solicitors, now its blue badges.

I am always surprised at how many (presumably practising solicitors) seem surprised or disagree with the outcome in these kind of cases.

We have all had it drilled into us since qualifying.  Dishonesty, no matter how petty, will almost always result in being struck off.

Just take the parking ticket, or the train fare, or the negligently missed court deadline, on the chin.  To do anything else is to risk throwing your career away.

The real dishonesty in the profession is on time-sheets. Junior lawyers pushed by greedy partners with time targets that are too high. When will the SRA look at this I wonder?

I dispute that England is a laughing stock. If it is, why does half the world want to live here, including you most probably?

he was dishonest and has no place in our profession, black or white.

ROF won’t print this post. Obv. Too contentious and not woke.

Realist looking like a bit of a prize plum there...

Everyone does it. Even most disabled don't need it. Scrap and go back to the little blue cars paid for by government.