Mishcon de Reya is the early leader in the race to be RollOnFriday Firm of the Year 2020.

Over 1,200 readers have entered in the first week of this year's survey. While most firms, including Mishcon, haven't fielded enough entries to qualify for the final results table, a paucity of statistical evidence won't stop RollOnFriday totting their marks up prematurely.

With a whopping 96%, Mishcon de Reya is the firm to beat. Perhaps an early slug of good scores was to be expected from the PR-savvy media specialist. No-one has yet mentioned the canteen, though, which could be its downfall.

More surprising is the presence of Jones Day in second place. A firm about which RollOnFriday has heard some alarming things recently, currently stands on 92%. Although this may well nosedive when staff who have been (allegedly) sexually harassed and discriminated against add their two cents. 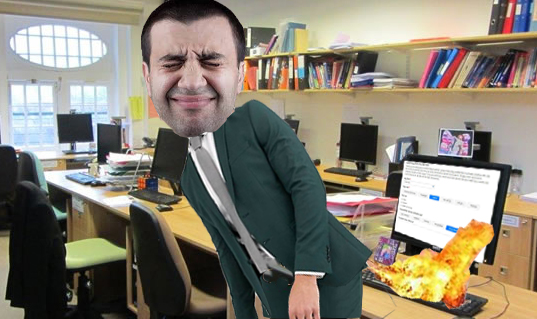 Be cruel or be kind, just be honest.

Meanwhile, Managing Partners of firms at the bottom of the table will be praying their happy staff both exist and enter the survey in the next two months, otherwise one of them will be unwrapping a Golden Turd.

As it stands, the legal profession's least-exhibited trophy is bound for Slater and Gordon, which is currently tracking at 25%. It probably shouldn't risk using its PR savvy to address the problem. Blake Morgan (26%) and Burness Paull (29%) also need to drag themselves out of contention, along with Slaughter and May, which has debuted with a shock 38%.

It is all still to play for, so please enter the survey below.

If you're in in-house, take this poll instead*.

*Unless you work for the SRA, in which case you might as well join your colleague who entered it in the Firm of the Year 2020 survey (mark: 29%).

Being a bit long in the tooth it surprises me a bit when people run down their own firms. If they don't like it why not just leave instead of constantly moaning about it? When this old codger was younger people used to talk up and be proud of their firms.

You can love your firm and think the current leaders are running it into the ground. Or that the culture is being lost to laterals.

The poor sods suffering the indignity of working for Slater & Gordon are effectively trapped there.  It's a terrible firm on any analysis, however the market is shrinking around them and so there are very few opportunities elsewhere.  For those lucky enough to end up elsewhere, they will find themselves as newbies (without employment rights) and therefore arguably in a more precarious position than if remaining at Smash & Grab.  I was lucky.  I managed to get out years ago, when the market was much healthier.

What wrongdoing are these firms accused of?  Where is the evidence that any of it is true?  Why am I such an arsehole?

I think the survey gives a healthy insight, to which our imperious overlords are likely oblivious - either because everyone is terrified to be truthful to their face or because they know but don't think it matters. Well it suddenly matters if any issues are highlighted in public on Rof. If your partners still don't care then you definitely know it's time to walk.

Another Age at 10:44, I agree that in a perfect world lawyers would be only too willing to comment positively about their firm; sadly the way things are today and the way that some firms are run can frequently mean that the management and culture of the firm leaves a lot to be desired and either lawyers at the firm are too scared of speaking up and then being bullied by management/partners or they know that their comments won’t be listened too and they’ll be tainted. At my old firm the situation was so bad that all manner of bad behaviour (from management, partners and associates)  was ignored or simply covered up and if anyone spoke up they were either bullied out or isolated and tainted so the only options were whistleblowing or ROF FOTY and surely that has to be better than bad behaviour going unchecked?

Slaters has a turnover of staff that has to be seen to be believed it is a constant revolving door and the culture is toxic! Every 6 months we shut an office or two.
The golden ? is a shoe in and it should be renamed the S&G award once we are out of business...

You wouldn't ask a gardener to fix your plumbing, so why would you ask a lawyer to run your business? What does a personal injury lawyer know about strategy or leadership? Is a cosmic beauty parade (the election) really the best way to determine who's best qualified to organise a £100m+ business? And before anybody mentions PwC, KPMG, etc... Their elections are effective because their partners are leadership professionals. It's their business to know how to run businesses. Lawyers should stick to what they're good at - instructing barristers. The partnership model for law firms is DEAD.

the S+G way this is our way ! this is the rubbish we get everyday from management all the time.