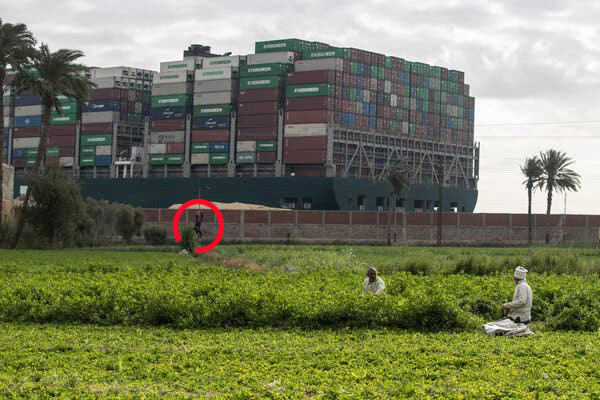 A UK-based lawyer has been accused of causing a huge container ship to run aground in the Suez Canal.

The Ever Given, which was finally freed on Tuesday, held up the transport of 200 ships and is predicted to have caused billions of pounds worth of losses after it became wedged in the canal for a week.

As affected businesses celebrated the end of the logjam, an initial investigation undertaken for Imabari Shipbuilding, the ultimate owner of the Ever Given, has concluded that a lawyer with cargo on the vessel was responsible for the disaster.

Craig Pinos, the founder of Pinos Law, applied "direct pressure" on the ship's crew to increase its speed along the Suez Canal in order to ensure it docked at Felixstowe on 3 April as scheduled, according to the report.

As the Ever Given made its way from China to Rotterdam on the first leg of its journey, Pinos contacted Imabari repeatedly to voice concerns that the ship was not keeping to its itinerary. The report claims that "Ultimate Consignee 1 [Pinos] telephoned Shoei Kisen Kaisha", a subsidiary of Imabari, "several times a day" warning that "any delay of delivery at POD Felixstowe of his exclusive use container would force the cancellation of a festival at which Ultimate Consignee 1 was the key exhibitor".

It noted that Pinos's cargo comprised "7,000 psychic crystals” which the lawyer “intended for sale at, initially, the Woodbridge Mind Body Spirit Festival" in Suffolk. A listing for the event shows the fair was due to take place on the 4th and 5th of April, but has now been postponed.

Pinos became so agitated by the potential delay of his cargo that he travelled to Egypt in breach of Covid regulations, claims the report, and persuaded officers of the Suez Canal Authority to allow him to board the Ever Given with its navigation pilots.

"While observing the SCA Pilots at the helm, Ultimate Consignee 1 told Pilot 1 he was a 'tortoise', and recommended the Captain 'stop being a chicken'", states the report. When the Captain expressed reservations, Pinos allegedly "gripped the Captain's hand to force an increase in speed despite holding no relevant qualifications to justify taking such a hazardous course of action".

As the 1,312-foot-long vessel began weaving erratically across the channel, the lawyer "began swearing", and commented, "It's like driving an oil tanker", states the report. When the ship ran aground, Pinos allegedly shouted, "Save yourselves", before climbing down the side of the Ever Given and fleeing into Egypt.

Pinos is now self-isolating at a Holiday Inn near Ipswich. He told RollOnFriday the report was "inaccurate in many respects", but that he could not comment further due to legal reasons.

However, while one lawyer has been blamed for grounding the Ever Given, another is being credited with freeing it. Adolf Pilarsoy, one of the tugboat captains who prised out the container ship, is a qualified barrister in the Netherlands. A man of many talents, five years ago he spearheaded the creation of a range of law firm-themed children's books.

Can confirm, I was the 7000 psychic crystals.

Of course when his website failed to display the badge I kind pf guessed...

Jokes on him. The owner has declared General Average so charterers and cargo interests will all have to pony up the cash to help pay for the losses.

( yes I'm aware of the date of the publication of the article and I am from Woodbridge).

Yeah yeah. First we blame all the lawyers. Suggest starting with the idiot who tried to drive it sideways down the canal first, m88s.

It took me waaay too long to notice the date. The Pinos Law website is brilliant. "Where Law meets Lay Lines"