A prominent Blackstone Chambers barrister has auctioned his collection of wine for the staggering sum of $9,586,823.

Ian Mill QC's private collection of 6,126 bottles set world records at a marathon nine-hour auction held by Zachys in New York. Every bottle was sold and nearly a third of the lots went for record sums. The auctioneer described it as "one of the most important collections of fine wine, and particularly fine Burgundy, that has come to market in the past decade. One could even say century." Zachys added that the success of the auction demonstrated "a healthy market for the rarest of the rare". Presumably very little of it was Merlot*.

The world records included a magnum of 1991 Romanée-Conti sold for $51,870 and six 2005 Rousseau Clos de Beze magnums that went for $12,350 per magnum. But Mill told RollOnFriday that the stand-out lot to outperform was at the cheapest end of the scale - 12 magnums of 2012 Mersault Genevrières Hospices de Beaune Cuvée sold for $6,175 in total, a jeroboam fetched $2,223 and a methuselah reached $4,446 - all around seven times their estimated price. Mill had originally made the canny investment at a charity auction in 2012.

Mill told RollOnFriday that he was very pleased with the outcome of the auction, although he was at pains to point out that the huge sum raised included a buyer's premium for the auctioneer. Still he must have made a few quid out of his investment. And fair play to him - the oenophile barrister has spent over 30 years in the trade amassing his collection of the finest wines known to humanity. He described it as a lifetime collection and "not a small venture".

RollOnFriday asked Mill to name the bottle that he was most pained to sell, but he responded that they were "all hard to part with. I didn't buy any wine that I didn't want to drink".

Asked to recommend a supermarket wine for less deep-pocketed drinkers, Mill suggested a Nyetimber English sparkling wine. As a Christmas tip for readers - at least one supermarket is currently selling 75cl bottles of the wine at a discounted price of £27. 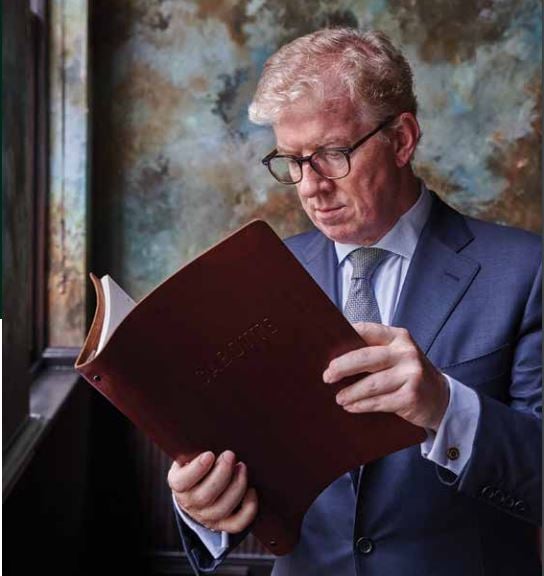 The QC obviously knows his stuff and has a good eye (and nose) for investing in wine. His road to Bacchus moment happened in 1985 when the silk quaffed a bottle of 1982 Bâtard-Montrachet at Le Manoir aux Quat-Saisons (at last, a story about the restaurant that doesn't feature pina coladas). Mill decided to learn more about the grape - his growing interest resulted in him becoming a shareholder in a wine-merchant business Morris & Verdin. He joined the wine trade buying Burgundy in quantity and arranging tasting sessions with producers in the region. For his latest venture Mill has taken a stake in a wine-focused restaurant, Cabotte.

Mill told RollOnFriday that he might consider setting up a version of the Cabotte restaurant in California in the distant future when he retires. However, for now he is carrying on his work as a barrister. So his clerks can drink to that.

*Yes, yes, we know Château Pétrus is Merlot. We drink little else at RollOnFriday Towers.

Am I the only one wondering what the value is of the wines he kept?!

i am hot-footing it down to Majestic to nab some 2019 vintage...

Good on him for actually answering RoF's questions without sounding defensive or pretentious.

Ian, looking forward to seeing you next to Prada Handbag Lady in the next Bar Walkout Photo.