Lawyers are bound to their firm by their colleagues more than anything else, according to the RollOnFriday Firm of the Year 2020 survey.

Asked what most made them stay at their firm, 34% of respondents said it was all about the people.

"To paraphrase Busted, it's what I go to work for", said a Jones Day trainee, who claimed their cohort "would put the chorus line in a West End show to shame". It was "People, Pay, Partying" which kept a Macfarlanes solicitor turning up, he said, adding, "The third one isn't true I just wanted three 'Ps'."

The people at Linklaters "make it a laugh, even at 2am", said a frazzled but delighted solicitor, while a Clifford Chance partner was reminded by her husband, "I am very lucky to work with such smart nice people (he used to work in a bank)".

"At the risk of encapsulating the Slaughters arrogance, almost every lawyer at the firm I've come across has been intelligent and switched-on, which absolutely has not been the case at other City firms", said a Slaughter and May solicitor. "The old school loyalty of the partners (i.e. long term loyalty to the firm, rather than to the biggest spending US firm of the day) is an underrated factor which has a subtle but very positive impact on culture". "As Paul Scholes was wedded to Manchester United, as am I to Slaughter and May", agreed a colleague. 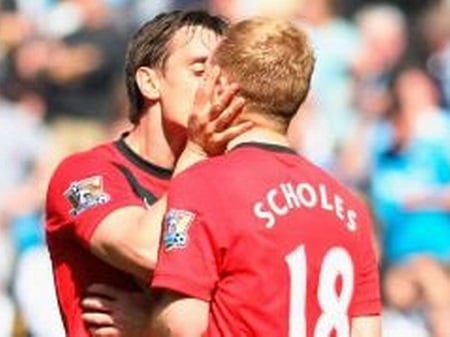 It's all about the love, sob.

Culture was frequently cited alongside people, and 18% said it was a key reason for staying at their firm. An equal proportion cited the quality of their work and clients. "Matters so juicy that you struggle to keep them confidential at the pub", said a Harbottle & Lewis solicitor. Please, do write in.

Pay was a background necessity for many, but only 6% said it was the main driver. Money was disproportionately present as a factor for lawyers at US firms. "$$$$$$", said a Kirkland & Ellis lawyer. "£££££", said another. Combining the two, a senior solicitor at Akin Gump said he stayed because of "the USD GBP exchange rate". "The money, that is the sole reason to stay", clarified a junior solicitor at Covington & Burling. 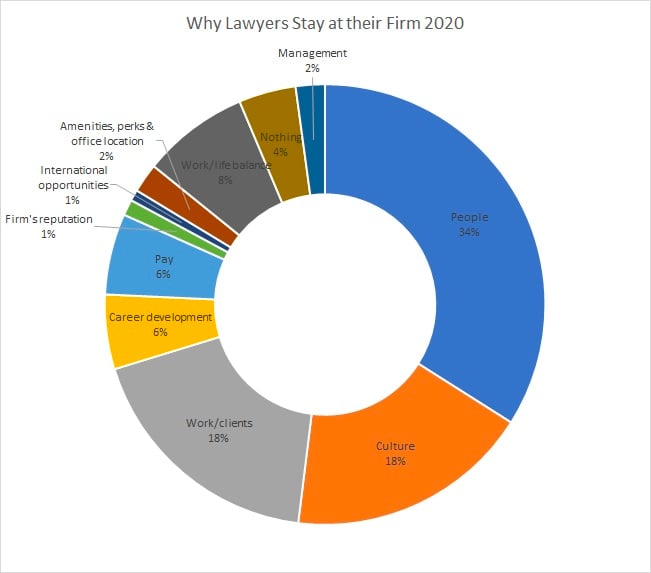 Work/life balance was key for 8%. "The day finishes at 5 rather than half past", shared a Plexus lawyer. "That's about it". Many raised flexible working and the option to work from home. "I can spend with my family", said a Burges Salmon solicitor, back when it was an option.

For 6% it was all about career development or, as one Kirkland partner put it, "The carrot of equity at the end of a very long stick".

An Allen & Overy trainee said the main reason he stayed was the "Nice salad bar", and a junior solicitor at Memery Crystal namechecked, "The chicken goujons in Ye Olde Cheshire Cheese - 37 seconds walk away".

Some had multiple reasons. "Female Comfort. Friends. Laziness. Money. Fear of having to interview. Fear of rejection", said a Trainspotter at Latham & Watkins.

129 people struggled to find anything positive which was making them stay. "I couldn't tell you even at gunpoint", said a senior solicitor at Slater & Gordon. "Probably it's down to my own lack of imagination. I don't know why I'm still there: Stockholm syndrome?" A partner at the Golden Turd responded, "The market is shrinking and I'm struggling to find another job".

"According to my spouse, a deep seated psychological problem", answered a lawyer at Blake Morgan. "I'm a lazy b*stard who can't muster up enough enthusiasm to update my LinkedIn", said a senior solicitor at PwC. And a senior solicitor at Irwin Mitchell blamed "A really shit agent who keeps proposing firms which dick me around for months on end then declare that they aren't interested".

I think I know that recruiter the last person referred to.  Pathetic.

I remember a colleagues was asked if it was his wife who made him go to work.

There was a deadly silence when everyone realised the unintended ambiguity of the question.

Slater Gordon is a shit show.

S&G employees at the dwindling smaller offices stay for the redundancy, or they are inexperienced law graduates desperate for experience.