A 50 year old woman claiming to be a lawyer has been arrested for a sweary rant at staff on a flight from Mumbai to London.

Simone O'Broin (reported to also be known as Simone Burns) was a business class passenger on an Air India flight from Mumbai to London last Saturday, when she launched into the tirade, which was captured on video. O'Broin told the cabin crew that she is an "international criminal lawyer for the Palestinian people". She walked up to one crew member and said "I work for all you fucking people. The fucking Rohingyas, the fucking people of all Asia". She slurred "I don't get any money for it by the way. But you won't give me a fucking glass of wine, is that correct?"

O'Broin claimed to be the "leader of the fucking boycott movement - If I say boycott fucking Air India - done!"  She continued "Do you understand me? You can't give me a wee bottle of wine?"

When a crew member told O'Broin to calm down, she jumped up and down and shouted "I'm a fucking international criminal lawyer and barrister. You will be pissed on in court". The silver-tongue charmer squared up to a female member of staff and then called her an "Indian fucking money-grabbing bastard", before screaming "I''ll tear your insides out, you stupid fucking c*nt". 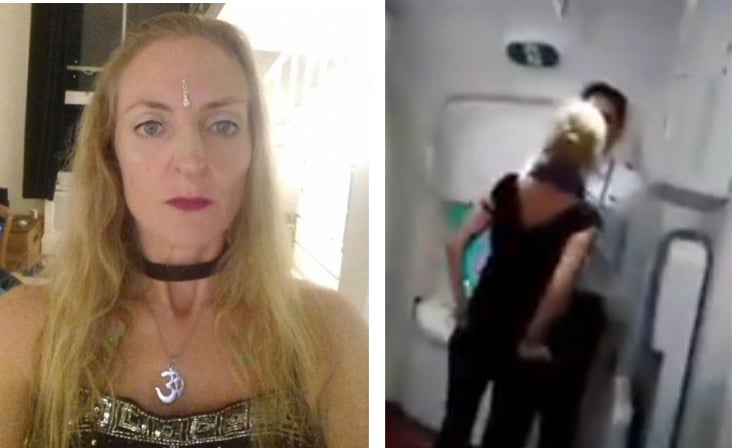 In a second video, O'Broin demonstrated her ranting stamina as she raged "I'm a human rights lawyer. You think I'm scared and you threaten me with bollocks." She added somewhat cryptically "Irish Republican Army, you'll be fucking shot" and mimicked a gun sign.  She also railed at fellow passengers for not "standing up against injustice".

Armed police officers escorted O'Broin off the plane when it landed in Heathrow. She was arrested but released after investigation.

It has been reported that O'Broin studied international law and trained as a lawyer in the UK, before working in Palestine. According to reports, the film was taken when she was on her way home from a two month holiday in Goa. Although O'Broin claimed to be a barrister, neither the Bar of England or Wales, Northern Ireland or Ireland had a record of a barrister with the name Simone O'Broin or Simone Burns.

The oratory skills of this supposed human rights lawyer can be seen here (NSFW):

I hate it when lawyers give drunken ***** a bad name

But is she a lawyer - no-one has ever heard of her, she has no professional registrations and Google searches turn up nada.

So she made threats to maim and kill, and invoked the name of a terrorist organisation.  We're in custodial territory here, aren't we?

Oh dear. They were certainly right to give her no more drink.

Alcohol addiction is a terrible affliction, but one probably not helped, like all mental illnesses, by public humiliation for entertainment purposes by the media.  Hope she gets help and moves on with her life.

Where do you start? Mentioning a terrorist organisation, claiming to be a the saviour of every person in Asia (unpaid to boot), claiming to have the power to cause everyone to boycott the flag carrier of the second most populous country in the world and also claiming to be able to urinate on people with her skills as a lawyer...

Why are so many people who love humanity not very good with humans?

As a BDS activist this is not unexpected behaviour.

She may be a lawyer but she's also a guttersnipe

What's that dripping down her forehead?

Seems she needs help rather than ridicule. Proof of the dark side of booze, especially when mixed with underlying issues.

Wishing her luck with dealing with her addiction - which is obviously very bad. If she can't control it, she will die young and friendless.

She's clearly pissed, but how are we able to diagnose alcoholism?

Anonn above: yes. Anyone whose behaviour is problematic has a problem.

Not a news source I would nrmally look to, but...

I thought it was a drag queen

She appears elsewhere threatening to sue the medical profession over her diseased nose. Unpleasant woman.

How many times once has come across these condescending champagne socialists who think the world owes it to them as they are the precious ones because they help the less fortunate. Looking at her she appears to be the more needy one.

She can take her "charity" and stick it where her sun does not shine from.

She wouldn't make it as a barista in a Goa bar ... forget the UK or Irish ones.

Good show by the staff though.