A 27-year-old female solicitor has told a London employment tribunal that the head of her law firm groped and secretly filmed her and fired her when she refused to have an affair.

The woman, who is engaged, has accused her 49-year-old married boss, named only as D, of sex discrimination and breach of contract. He denies the claims.

And what claims. The junior solicitor, whom RollOnFriday will call Z, described how D took her and some work colleagues to a live sex show in Amsterdam. "This was no PG rated sex show", she said, "this was full on live sex happening in front of us, which I don't think is appropriate for us to go watch". Daphne Romney QC, D's barrister, argued that "The idea originated with your colleagues". 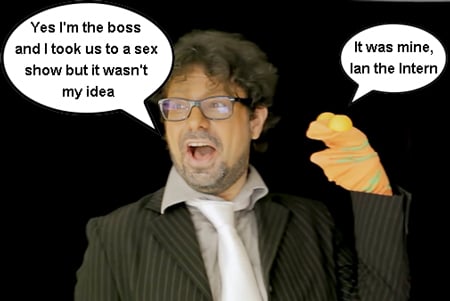 Z claimed that D also assaulted her in his hotel room on the trip. In testimony which evoked Lord Lester's 'missed gearstick' defence, Z said "He came up to me at one point and put his hand on my chest, pretending he was checking my heartbeat, but his hand was over my left breast. All I could think was if I didn't get out of his room he's going to rape me".

She claimed D asked to see her passport photo before hiring her because "he was only interested in recruiting what he considered to be attractive young women".

"He told me, 'Put it this way: would I have any more kids with my wife? No. But I would have another baby with another woman. I am allowed two wives after all.'"

As well as taking her out in London to Annabel's, the Playboy Club and a Rita Ora concert, he also flew her first class to Dubai for a "work trip" at which he gave her VIP tickets to the Formula 1 race, and where they stayed at the 7* star Burj Al Arab hotel. Z said D secretly filmed her on his phone until she  gave up and let him take photos of her sunbathing. "I was fed up of the constant groping and touching. He would take constant videos and photos all the time. I didn't want my photos taken but he kept insisting."

Asked why she sent him photos of herself in "see through dresses" after the trip, Z said D had been avoiding her and "that was a way for me to get confirmation from him that he was okay with me".

Romney read out WhatsApp messages between Z and a friend in which the junior solicitor said of her fiance, "Anyway I'm sick of him everyone wonders why I have such wandering eyes", and wrote, "I want to marry a millionaire, I bored with this lowlife, I'M BORED".

"I want my boyfriend to turn up outside my house in a Range Rover and buy me a puppy", she wrote, as well as a message about D after she was sacked which read "I want to f**k up his life".

The tribunal heard that Z was fired on her return from Dubai for falsifying work time-sheets and overcharging clients. "I admit I was struggling to fill in my timesheets but I never once overcharged a client", said Z, who described receiving "over the top" formal written warnings from D including one for failing to repay the firm £3 for a Land Registry certificate. "It's very telling", said Z, "that within two hours of me emailing him to make it clear I was not keen on returning to Dubai with him, he sacked me".

The junior solicitor also faces serious claims including one, which she has admitted, that she sent the partner photos of herself in see-through dresses.

This sounds like Z was a failed solicitor who only got as far as she did due to relying on her looks and is now trying to jump on the #metoo bandwagon.

To be clear, I don't think it is fair that Z progressed in her career due to relying on her looks but thats sadly the state of the legal world. It only got her so far and now she is trying to get more money out of the situation. D is clearly also a terrible guy for cheating on his wife.

The only person in this situation who I feel sorry for is Z's fiance.

Why on earth did the partner think it was a good idea to attend the sex show (even if it were not his idea)? Why did he think any of those things he took her to were a good idea?

Why did she get sacked and not he?

The fact they dredge up what she said about her boyfriend is the reason so many women don't bring these kinds of cases. It is just not worth the huge delve into your personal life.

@Lydia - remember the junior solicitor thought the sex show was a good idea too, and she was happy to go with him on the other things. It only became a problem when the relationship soured.

She was fired (allegedly by the firm) for performance issues and (allegedly by her) for not sleeping with him. One of the tasks of the tribunal will be to try to establish the truth. She wasn't sacked for attending the sex show. He wasn't sacked for attending the sex show, and there have been no allegations about his performance or that he refused to sleep with anyone.

Unfortunately in these sort of cases where both sides are flinging allegations there is inevitably a delve into personal lives of both sides, but this can't be avoided where it has relevance, for example where the accuser has admitted to being on the lookout for a rich man. The only way to avoid this would be through something like arbitration.

@ Anonymous 01 Mar 19 - why would you assume that because she is good looking that she is not capable of doing the job?

Also, it is interesting that according to your summary the only problem with D's behaviour was D's cheating on his wife?!

The fact that you concentrate on the junior's behaviour (who is not the accused) significantly more than on Z's (an employer and senior) is rather telling and shows your prejudice.

Lord Lester didn't have a 'missed gearstick' defence. His defence was that his car was an automatic, so he wouldn't have been changing gears, and so couldn't have groped anyone while changing gears. The Commissioner investigating him refused to look at his defence.

@ the last comment. Because she was fired for making up.time and she basically admitted the same. Look at you automatically assuming she is innocent and telling the truth rather than looking at the facts...

Of course I'm going to look at both of their behaviour on the situation. But let's be clear, it's not illegal to go to a strip club

I hope z is prosecuted. Too often sexual harassment claims are abused and it puts off genuine claims.

Did she explain why she went to tbe sex show if she didn't find it appropriate?

Who would want to go to a sex show that required parental guidance?

Classic case of grooming women! Clearly a man wouldn't have been treated in the same way etc. (unless of course D was that way inclined). Only way of exposing these matters or bringing them to the attention of a court/tribunal is once you've left the grip of such offenders, that or face being pushed out of a job anyway...which is what has happened to Z. D clearly had a significant degree of power and influence over Z as she was a junior. I wonder what D's wife thought of him taking Z to Dubai first class to stay at a 7 star hotel? Disagree entirely that there is a band wagon out there on #metoo, but more so that women are in fact taking a stand out there against sleaze. I wouldn't be surprised if it comes out that this guy had previous victims etc. The whole firing issue was clearly a front which was bound to happen when D knew he wasn't going to get his way with Z, can't see how this is a 'competency issue' when clearly she remained employed for a considerable time and is completely unconnected to the fact she is fired as soon as she says 'no I don't want to go back to Dubai with you'. Wake up and smell the coffee

If Z has made false or exaggerated claims, and some of them look to be, then she has sexually harassed D.

There is of course no evidence or even allegation of 'grooming'.

Misogyny and bigamy at its best: ...Put it this way: would I have any more kids with my wife? No. But I would have another baby with another woman. I am allowed two wives after all.

Great example of misandry. Zero evidence of grooming and good evidence of her being a terrible lawyer while also knowing exactly what she was getting herself into - yet you still take her side.

Lydia, is that you posting under another name?

..bit like when Jezza Corbyn missed the high five with Emily Thornberry! ..the one that got away eh, lol! I feel a Meme coming along with this chap.

@Shake-Bin-Lawyer - it was a joke. They're not illegal yet!

More infighting on this article than MPs negotiating Brexit, with the classic lawyers procrastinating. Surely either Z or D will be on the ropes for contempt of court at the end of this.

...I take it he just received the Law Society email on the use of NDAs, ooops!

Did she complain? Ever? Apart from about her inadequate fiance and being poor? Why go away with him to Dubai and other exotic places ifs she knew she was going to be groped and hated it? Was she frog-marched into the first class cabin?