Skip to main content
High Court judge delivers obscene verdict for SJ Berwin client
A judge has delivered an expletive-filled verdict in the High Court thanks to evidence unearthed by SJ Berwin. The Honourable Mr Justice Flaux solemnly read out no less than 15 f*cks, a shit and the c-bomb in the course of his judgment.


Flaux was sitting on a case brought by brokering firm ODL Securities Limited, which instructed SJ Berwin when it discovered that its head of risk, Adrian McGrath, and a director, Tony Clements, had 'borrowed' $7 million without authorisation. They were accused of using the money to buy a house for McGrath and prop up a struggling motor-racing business in which Clements was an investor.

ODL's claim relied heavily on transcripts of incriminating telephone conversations between the defendants. Flaux did not censor his verdict: 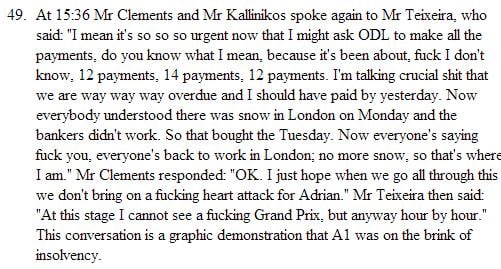 Over the next 20 paragraphs Flaux thoughtfully quotes references to "f*cking monkeys", "complete p*ss" and, in one place, "a complete c*nt".

Flaux found against the defendants, who were ordered to pay £4 million and SJ Berwin's f*cking costs. Those of a less sensitive nature can find the full judgment here.