Skip to main content
Firm of the Year results: The Magic Circle
The Magic Circle took a hiding (again) from the leading US outfits in the Firm of the Year survey, but there were also big changes in the big five's finishing order. What better way to celebrate than to canter through some amateurish bar charts and see what staff really think. 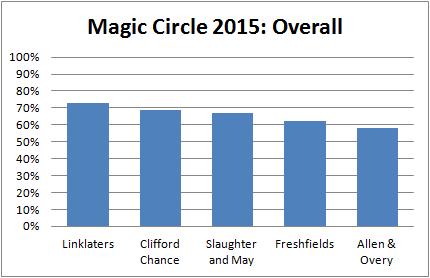 For the first time ever, Linklaters claimed the top spot of the group with 73%. That's 13 points higher than last year, and the first time Links hasn't come last since 2011, when it came third with 59% (not a vintage year for anyone). Relative to the overall spread of 52 points between the Firm of the Year 2015 and the Golden Turd, the 15 points separating Linklaters from bottom-placed Allen & Overy is fairly small. Nonetheless it is a bit of a fall from grace for Allen & Overy, and also Freshfields, which both came joint top of the Magic Circle in 2014 with 70%. 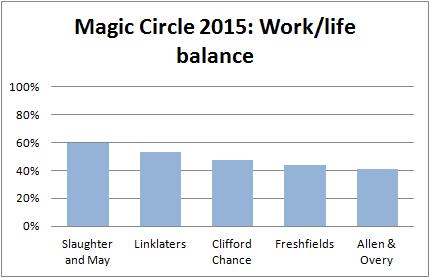 It won't come as a shock that the Magic Circle was, with one exception, rather poorly rated for work/life balance. Bottom-placed A&O's Spitalfields location would be "amazing" were one "ever allowed out of the office before midnight". And, as workloads pick up, the hours are "only getting worse". They're "crap" at Clifford Chance, too, where the firm's idea of supporting associates who are being "worked to death" is apparently to "lay on resilience workshops" rather than "hiring sufficient numbers of staff to cope with the work". Another says they have "no need to sign up for Grindr" since a partner keeps promising that they're about to be "bent over", although colleagues say they "don't beast you for the hell of it".


It's the same on Fleet Street, where a Freshfields lawyer says it's "incredibly frustrating" that 60% of the long nights "seem to stem from a collective inability to ask: why are we doing this now?"

Slaughter and May is the exception, with a work/life balance score of 60% which borders on the respectable. The firm always performs significantly better than the rest of the Magic Circle, because there are no billing targets, which seems to mean "no facetime culture". "You work hard when it's busy", says one, "and you leave at 5:30 when it's not". 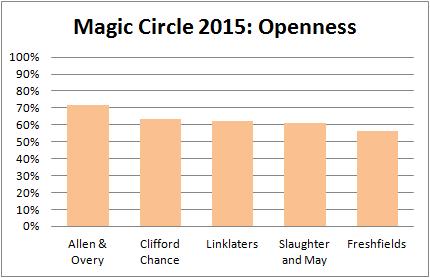 A&O lawyers may be crushed by their workloads, but at least it's no secret. They give the firm a decent 72% for openness, with "generally pretty approachable" partners who "largely give the impression of actually listening to concerns". The other firms clustered around the so-so 60% mark, with Clifford Chance getting credit for  "open management", but flak for "weak" communications from the top."Opacity" is an issue at Slaughters, possibly because the partners "are treated like demi-gods. Most of them are entirely unapproachable". But Freshfields performed worst, its "very opaque remuneration structure" helping it to 56%. 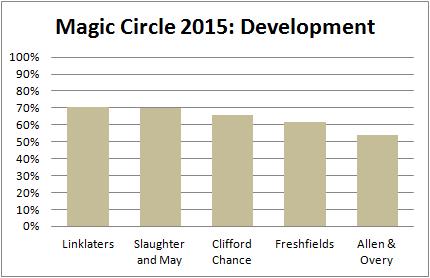 Linklaters and Slaughters achieved good scores for staff development, while A&O fell well behind the pack with 54%. There were almost no comp'aints about the quality of the work from Magic Cirle staff, who called it everything from "excellent" at A&O to "top notch" at Clifford Chance.

Training was also rated highly, although "brilliant" training at CC is marred by an "opaque" career path. As it is at Freshfields, where an associate says the Career Milestones policy is "universally loathed". Staff at all five firms appreciate that the Magic Circle enjoys recognition as an "elite" brand, meaning development outside their firm is always an option. the name is "CV gold dust", says a Slaughters associate.

And it may need to be. Making partner in the Magic Cicle is, says a Clifford Chance solicitor, "challenging". A Slaughter and May senior associate says the partnership prospects are "truly appalling", with one route through: "a combination of Black Magic and luck". 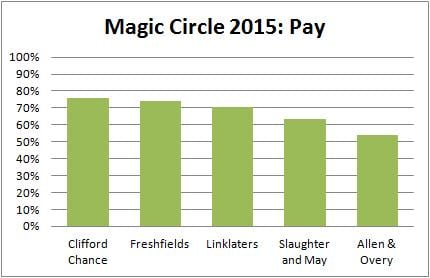 But what the Magic Circle lacks in partnership porspects and work/life balance, it makes up in money. Three firms scored over 70%.

Although A&O managed just 54%. Mainly, it seems, because of a decision to raise salaries much later in the year than the other Magic Circle firms, and because of the "great bonus stitch up 2014". Staff say that the firm decided that 85% busyness for the year would be the threshold for a bonus, but only told them a month before year-end. A&O says staff were warned the previous April, but in any event there were "a lot of peeved associates" who say they had no time to get the extra hours and missed out by a sliver. It was handled, says another, "atrociously badly".

The higher wages on offer at US firms attracted even more ire than in previous years. "Surely the Magic Circle are going to reach a point where paying associates 30-50% less than the US competition is going to see a brain drain?" says one Clifford Chance lawyer, adding, "the idea that you should stay for the quality of the work/training/career development is looking increasingly preposterous." One lawyer says working at Slaughters "is what I imagine it is like to be a Mexican: aside from a privileged few, the vast majority of your compatriots spend their days staring wistfully across the border at Amercian utopia". And play a tiny violin for the Linklaters associate who says that "all my mates have gone to US firms and laugh at me for not having done the same".

However lots of staff still appreciate that they get quite a lot. A Freshfields lawyer acknowledges that he is "not getting paid as much as lawyers in some inconsequential grubby offshoots of American behemoth firms", but "that's just the way the market is". A Slaughters lawyer adds that while she sometimes thinks "Why am I doing the same amount of work as I would be at an American firm for half the money?", half the money "still feels like quite a lot".

And at least one Slaughters senior associate has concerns closer to home than US firms. Getting paid "the same (maybe less?) than a fucking pipsqueak at FF/Links" is "a very tough pill".
Tip Off ROF

A&O's bonus policy is a disgrace and encourages unethical behaviour - and not just in London.
1
Vote up!
2
Vote down!
How's the morale at A&O now? Are associates moving to US firms or has the Stockholm Syndrome effect settled in?
1
Vote up!
2
Vote down!
If you open a new office every 6 months like A&O has been doing there is only one way to keep PEP above the magical 1ml mark...sweat your assets harder whilst cutting staff costs (including not paying bonuses).
1
Vote up!
2
Vote down!
A&O also screwed over lots of people on their bonus by use of the following mechanic:

- promote all 4/5 PQEs to 'senior associate'
- state that no new senior associate can get better than a '3' grade (i.e. meets all required standards)
- severely cut bonuses for senior associates who are 'only' meeting these standards
- thus cutting the amount received by anyone 4/5 PQE who was previously an above-average or exceptional performer at associate level, even though they had been promoted and had been told that senior associates got roughly double the bonus of associates performing at the same level (which had previously been the case)