Two of the joint Firms of the Year 2018 came top. At Osborne Clarke (94%), "I feel incredibly confident about how the firm is managed", said a trainee. "Transparency is key", said a 4PQE. "I hear about major firm changes from my firm management. I am fully in the loop on the firm's financials, and plans for the future". It "evidences the collaborative attitude the management takes with its fee-earners - we're not just minions". They "talk to us", said a senior solicitor. "And quite often they even listen to us. What more could you want out of management". The top brass at Mills & Reeve (94%) was "amazingly energetic and innovative", said a trainee, "and not ashamed to dress up as rudolf and santa for the firm christmas photo" (a senior Grinch said they "looked like they had been let out for the day", but you can't please everyone). "I don't ever feel like staff are kept in the dark over issues", said another senior solicitor, "and a real effort is made to keep everyone updated about management issues, both good and bad".

In third place for management, Bird & Bird (92%), was also "good at communicating developments to everyone", said a trainee. At the third Firm Of The Year 2018, Burges Salmon (91%), the Senior Partner "is the embodiment of a classy Chairman" who "has the anecdote, handshake and laugh absolutely down". The "generally excellent" management, said an NQ, "always works to improve those areas where deficiencies are identified". At Travers Smith (89%) management was "excellent" and "hands-on", said staff, while the MP was "really driving the firm forward". Although management in some departments "could most kindly be described as machiavellian". 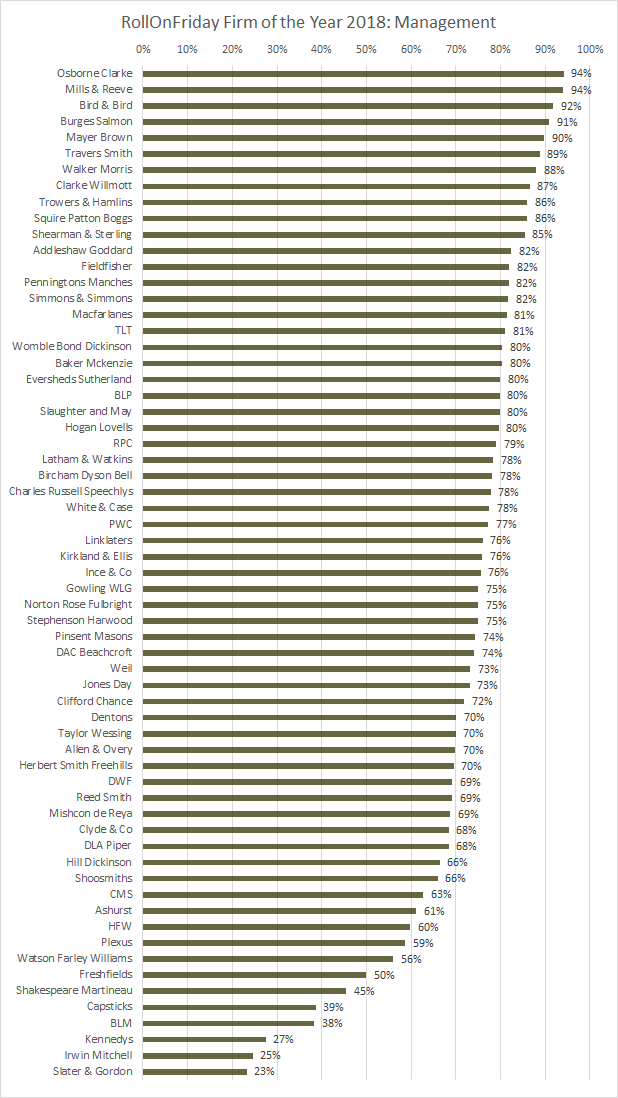 There were "some really good forward-thinking people" at Leeds-based firm Walker Morris (88%), said a lawyer. However, "there are also a lot of backward old codgers that really need to walk away and take a long overdue P&O cruise". One respondent was peeved that "in response to repeated gripes about a lack of recognition of people going the extra mile", the firm "decided to introduce internal postcards to enable people to say thank you...Personally, I can't wait to get a postcard saying thanks from a socially inept partner after my next all-nighter".

The majority of partners at Trowers & Hamlins (86%) "are great", said a junior lawyer, "but a minority are absolute shockers" who told staff "it wasn't like this back in their day, while giving you mind numbingly boring tasks at 10pm". It was a strong showing for Squire Patton Boggs (86%), deserved, said a partner, because of "continued improvement following the lows of mid 00's Hammonds days". At Addleshaw Goddard (82%), MP John Joyce "feels like a very steady pair of hands and seems to have his priorities right", said a senior solicitor. Management was, said another, "largely non-offensive with the usual mid-market delusions of grandeur".

Fieldfisher (82%) boss Michael Chissick "is the shit", said a junior solicitor. A partner said he had "done an amazing job at getting all parts of the firm moving in roughly the same direction, something that would have been unthinkable back in the dark days of 2012". They "seem to be doing something to keep profits up at least", said a junior solicitor. Although the firm did overhaul the time recording and billing systems, with glitchy consequences. One lawyer "managed to record over 40 hours in one day" and another clocked up 7,000 hours "when they left their timer running over the weekend unknowingly". The system "does not work and management are claiming it as 'user error'. Because whilst the firm hires quality lawyers, we are all incapable of using a system that functions perfectly".


Macfarlanes (81%) "is far from bust", said a junior solicitor, "which we should be grateful for - but the top dogs are all old men". "Always get the impression that they know what they are doing", said a peer. "Ethos is conservative but when you look at KWM you don't particularly mind and from time to time management do surprise you with their modernity". Regional Eversheds Sutherland (80%) offices "were still coming to terms with us no longer being a regional firm", said a junior solicitor, "so the US presence will probably sink in by 2040". That said, "the direction of the firm seems to be positive", said others. "We're edging ever closer to actually being global" and the US merger "has definitely made a positive impact on workstreams". There was a similarly welcoming view at BLP (80%), where junior solicitors "look forward to welcoming our new Yankee overlords".

Slaughter and May (80%) came top of the Magic Circle for management, with a senior solicitor positing that it was "the best managed firm in the City". Although the partners, said a junior, "still behave like a secretive Illuminati society, refusing to give any details to the associates about anything". EU-based lawyers at Hogan Lovells (80%) "say the firm is getting too American", said an associate, while "American lawyers say the firm is getting too European. Like the BBC, if no one's happy they're probably doing something right".
Tip Off ROF