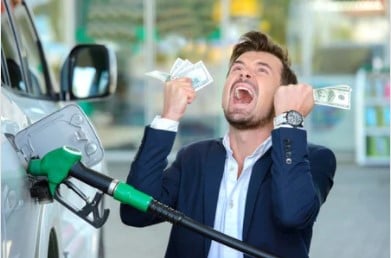 Lawyers at Simpson Thacher & Bartlett and Covington & Burling in London have been given raises across the board in line with their American colleagues, according to screenshots leaked to RollOnFriday.

It would mean newly qualified lawyers in Simpson Thacher's UK branch are being paid £158,000, making them among the best-paid in the country along with NQs at Akin Gump (£158k), Fried Frank (£160k) and Goodwin Proctor (£161k). Kirkland & Ellis and several more US firms are understood to pay in the same region.

A source provided RollOnFriday with a breakdown of the firm's complete new salary scale, which provides an envy-inducing insight into the giant sums Simpson Thacher & Bartlett is bestowing on its junior lawyers.

The salary increases are retroactive to 1 January 2022, said the leaked memo, allegedly signed off by Jason Glover, the firm's London Managing Partner (who certain recruiters want to namedrop as their best bud).

The leaked Simpson Thacher scale reveals that 5PQEs are now being paid a cool £264k: 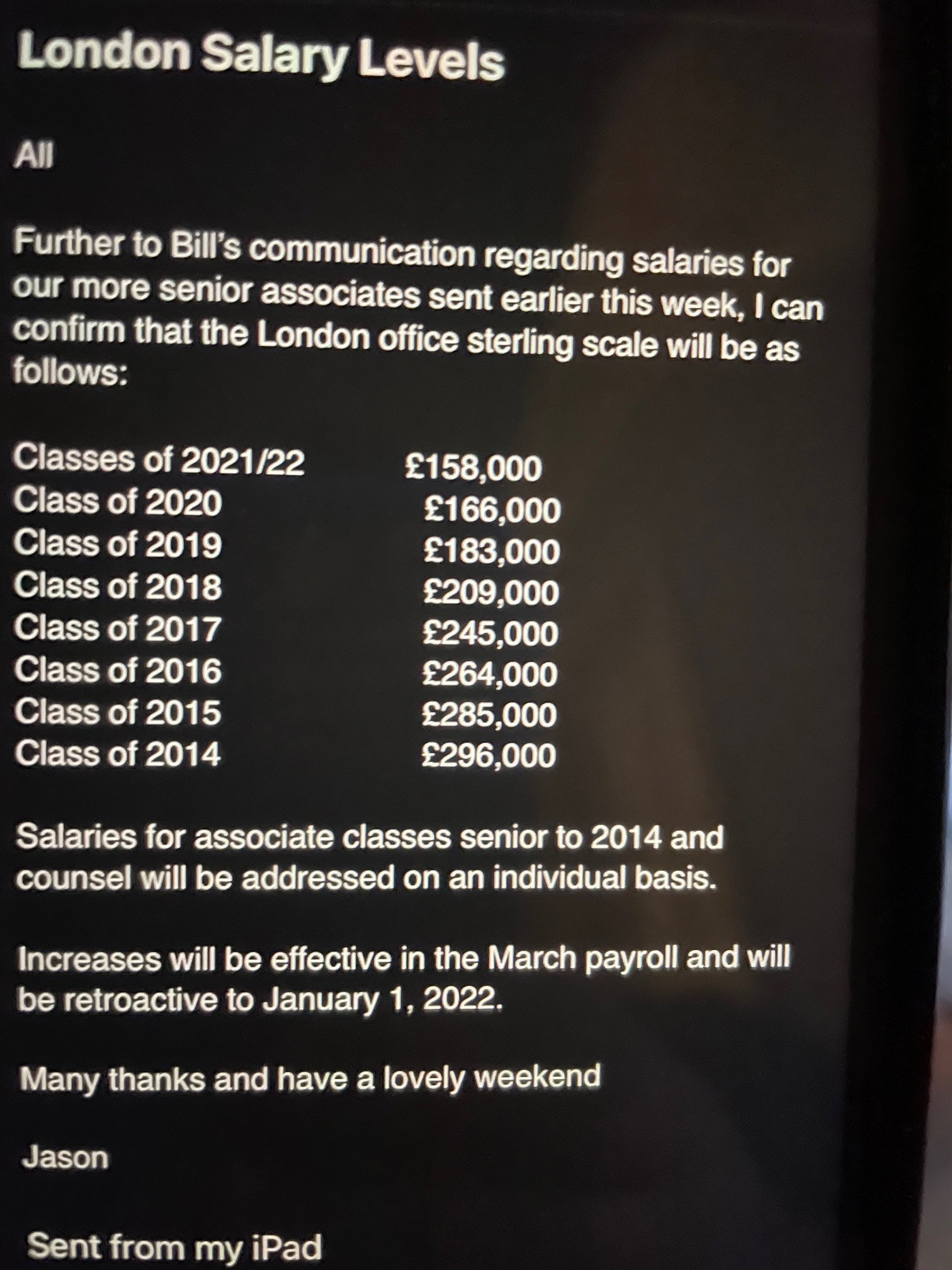 The biggest salary hikes across the City in recent months have been prompted by US firms seeking to match or outdo each other across the pond. In January, Milbank was the first major US firm this year to kick off the pay race with a new scale, which was swiftly matched by its competitors. In February, Davis Polk leapfrogged everyone with the highest pay scale, and BigLaw scrambled to realign again. Although, within a few days, Cravath then surpassed that proposal, resulting in firms such as Simpson Thacher & Bartlett unlocking their coffers once more to match Cravath's scale.

Meanwhile, at Covington & Burling, NQs salaries in London are being raised from £129,000 to £151,000 retroactively from 1 January 2022, according to this leaked memo. It also reveals that Covington offers a range of salary at each band from 3PQE onwards, presumably based on performance and/or billing targets: 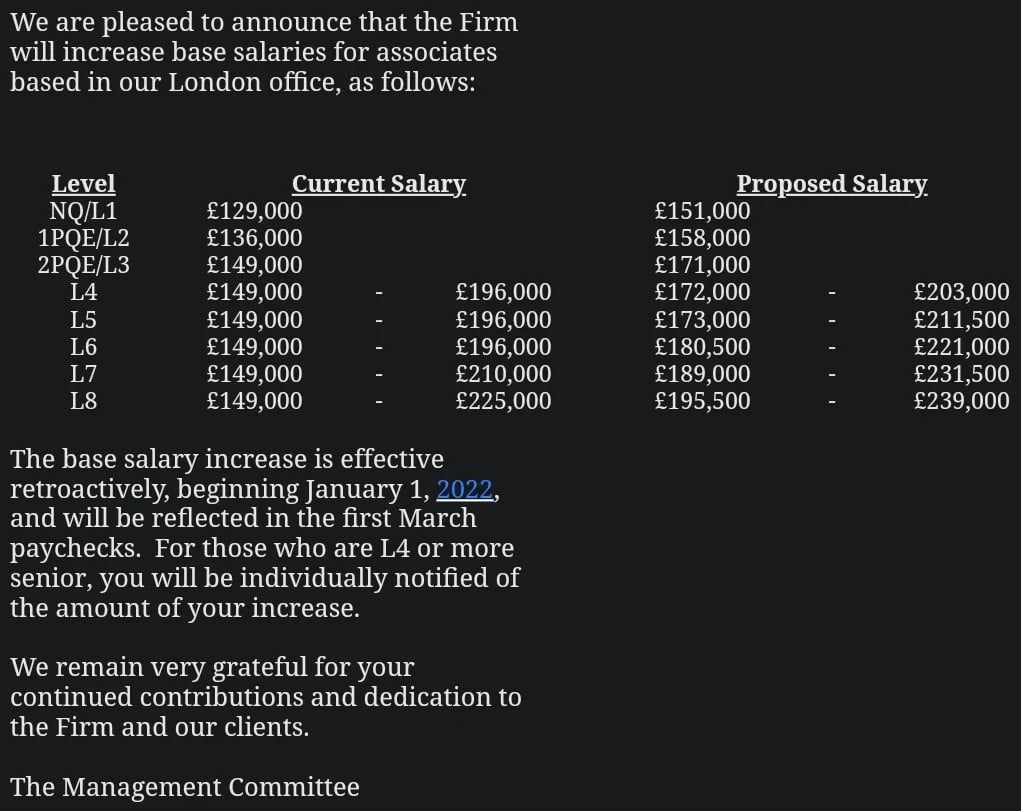 The sums paid by US firms, which are pulling up those offered by top City firms, has prompted public expressions of concern from law firm leaders.

DWF's CEO, Sir Nigel Knowles, warned that "offering more and more money to young people is only a sticking plaster", and that massive hikes are "not a sincere, sustainable or healthy solution for anyone".

Charles Russell Speechlys, which pays NQs a salary of £68k, said it would resist, telling RollOnFriday that its approach was "not to make knee jerk reaction changes in response to these unprecedented labour market fluctuations, driven by US and Magic Circle Firms".

Neither Covington & Burling or Simpson Thacher & Bartlett responded to requests for comment.

RollOnFriday's keen to pull together pay scales across the US firms, and the rest for that matter - so feel free to send them in.

I think it’s time for a number of the other so called ‘Elite’ US firms to match.

Out of genuine interest, do the styles of communication above reflect different cultures at Simpson Thacher and Covington & Burling?

Obviously wouldn't expect an easy life at either firm, but based on those emails alone I'd conclude that SC is a much nicer / friendlier place to work. Can anyone confirm?

Sent from my ipad...

Bit concerning that certain US firms in London that are supposedly in the same bracket as STB (and arguably higher) have still not matched in London, particularly when most other White Shoes in London have matched.

Interesting website. Must admit I had to chuckle at the idea of coming out of expensive law school and enduring a gruelling two-year training contract, only to be paid a paltry £22k a month five years down the road. And that’s pre-tax! When will these miserly US firms wake up and start paying proper salaries to attract the best talent? Also who or what is a Womble bond?

I regret not going to one of these types of firms for 5 years of beasting before getting out.

Law showing it is one of very few industries beating the inflation rates. Imagine being a cashier on £22k and scanning a Simpson Thatcher Trainee's meal deal at midnight.

Just about all of those firms have matched.  The memos only make ROF/other publications when someone leaks them.

It’s arguable that the pay for STB is fair because the lev fin associates easily work 100+ hour/week.

Proskauer, Ropes and Wilkie to name but a few have failed to match in London. Rather telling

MOFO, Sidley and PH have all revised the scale in London but the pay is still about 2.5-5% less than STC and only 60-85% more than MC firms.

This is untrue.  Proskauer matched DPW and then re-matched when Cravath raised.  The scale caps out at £302,500 for a class of 2014, and is marginally higher than the STB rates quoted above at almost all levels.

Zero chance Ropes will match. They're now about 33% below competitors given the 1.45 rate.

Different cultures? 11 March 22 11:19 For what it is worth I work in-house and brief Covington a lot, the team I deal with are all very easy to work with: no stuffiness at all and the partners are very approachable.

That said, given how they tend to give us cheaper fee quotes than their competitors I have no idea how they make any money with a wage bill like that.

Great show from C&B for their NQs, but talk about bunching!

Comparing the two firms in the article: STB staring with a 7k lead clearing C&B with a 56.5k home run at 7PQE is incredible, made more so by a STB 4PQE just nudging a C&B 7PQE by 0.5k...