In 2013 Andrew Iyer was sentenced to four years and eight months in jail for defrauding Ince & Co and its clients of £3 million. During his trial it was revealed that Iyer tried to secure an OBE by writing to the Home Office pretending to be a (fictitious) cancer specialist called 'Elizabeth Herring'. RollOnFriday discovered that he also deployed the fishy Herring to give his self-published novel, 'The Betrayed', a five star review on Amazon.

Iyer was struck off, but on his release from prison he established a new legal advice business, IYLegal. And now Corporate Livewire, a company which pumps out awards (and trophies and directory profiles for payment) has named Iyer "Lawyer of the Year for Energy & Natural Resources" in its 'Global Legal Awards 2016'. It said its judging panel "placed each shortlisted candidate under acute scrutiny", and that Iyer had "proven to be of high caliber, showing a strong motivation and drive to achieve fantastic results within the legal community". His business also appeared to sponsor the awards: 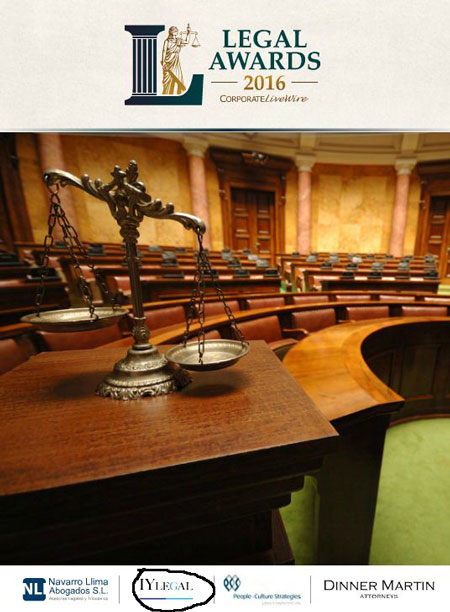 However Corporate Livewire denied that its panel was influenced by any payment. Spokesman David Bateson told RollOnFriday that only two of the six judges were Corporate Livewire employees, and that in any event they picked the winners before contacting them with the opportunity to pay for a profile in the brochure or to sponsor the awards*.

Iyer said, "I just paid for a profile page in the booklet after I was notified of the Award.  That my firm’s logo appears at the foot of the front page does not mean I sponsored the Awards". He told RollOnFriday, "I was very surprised to win an award in the circumstances, but having won did not want to miss a chance to appear in their publication; just like all the other lawyers that appear. Let's face it, my PR opportunities are limited these days". He said, "I make sure I do the right thing these days, especially where my legal services businesses is concerned, having got it so wrong in the past.".

*RollOnFriday has no such procedures in place, nor ethical qualms. Individuals wishing to win a desirable 'RollOnFriday Lawyer of the Year' award, made entirely from recycled materials, should send a cheque for £1,000 to RollOnFriday Ltd, Hamilton House, 1 Temple Avenue, EC4Y 0HA. The judges' decision is final: it costs £1,000.
Tip Off ROF

I can't see the problem here. He gets a Corporate Livewire Award as many do and then just pays for a page profile in their publication, as many do! Give the guy a break
341
Vote up!
343
Vote down!
He did bird for ripping off clients then had the brass neck to accept a lawyer of the year award. If you take a prize for that after doing what he did, you maybe don't get a break.
349
Vote up!
342
Vote down!
What the f*cking f*ck? I keep my nose clean and earn buttons complying to the letter with accounts rules and doing the right thing. This old lag is struck-off but carries on practising as a "lawyer" as if nothing had happened? Where the f*ck is the justice in that? More importantly, can someone from the SRA stop surfing Facebook for 10 minutes, take their feet off the desk and explain why he's allowed to be running a "law firm"?
316
Vote up!
368
Vote down!
Anyone can call themselves a 'lawyer' and run a 'legal services' firm doing non regulated work which is what he does. There are loads of non solicitors out there doing that; the slippery slope for solicitors sadly...
322
Vote up!
369
Vote down!
Why can he still call himself a lawyer?

Section 21 of the Solicitors Act 1974 To be qualified to act as a solicitor, you must have been admitted as a solicitor, be on the roll and have a practising certificate (s1 Solicitors Act). You will therefore be committing a criminal offence under section 21, as well as being in breach of the PFR, if you use any description which implies that you are qualified to act as a solicitor and you do not have a practising certificate.
334
Vote up!
346
Vote down!
It's well established that 'lawyer' does not mean a solicitor. There are all sorts of lawyers. He is doing nothing wrong or contrary to the Act.
341
Vote up!
363
Vote down!
Lawyers disagreeing about what a lawyer is on a comment page of ROF does not fill non-lawyers with much confidence.
370
Vote up!
354
Vote down!
Absolutely horrified by this
324
Vote up!
378
Vote down!
I've had a recent case against him. He's an excellent lawyer, good to do business with and very effective. I've no problem with him being back in the market.
344
Vote up!
348
Vote down!
Anonymous User @ 19:28: Is your name Andrew Iyer by chance?
353
Vote up!
353
Vote down!
Much deserved, give that man an OBE.
329
Vote up!
359
Vote down!
Good to see the much vaunted "Tesco Law" reforms are giving the general public more choice, like the option of being gulled by a struck off shitehawk.
326
Vote up!
344
Vote down!