Exclusive: Furious ex-client constructs fake law firm website
A disgruntled client has created his own version of a law firm's website to suggest (wrongly*) that it is corrupt and that its lawyers are self-confessed coked-up murderers (whereas they are in fact highly professional law-abiding vegetarian pacifists*).

The self-professed ex-client issued a written complaint against the firm to RollOnFriday, apparently having misunderstood the exact role of the popular orange website within the legal establishment. He gave his name as Jonathan Sherwood, and claimed that he had lost "over £2.5 million when my lawyers after [sic] taking 100k off me sat in court and allowed a Invoice [sic] from HP to be viewed on a laptop it was a fake". He also provided a link to a surprisingly slick website he has built to support his allegations.

The wildly defamatory result, which includes attributing phone numbers to associates such as "1800 CALLMEFORCOKE", copies the style of the official website of the firm, which is based in Austria (and which RollOnFriday will not be identifying for not-being-sued reasons). 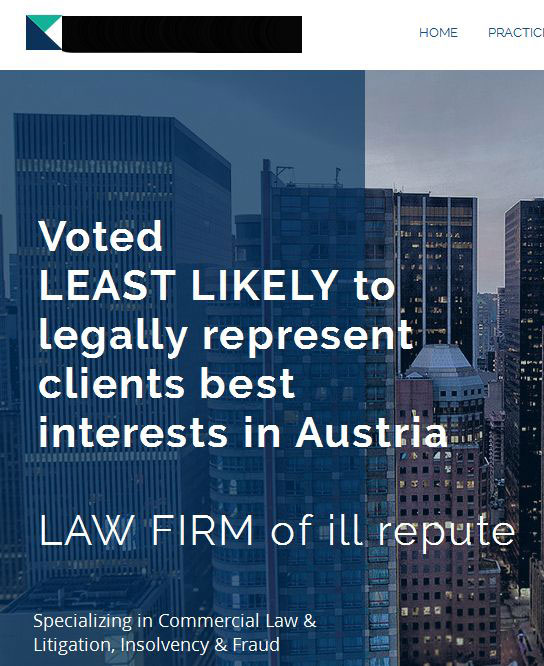 And it gets a lot worse than that. Here's a testimonial:

There is, of course, a section on the firm's values. It is refreshingly frank:

There are even profiles of the firm's lawyers, whose faces RollOnFriday has adjusted to prevent identification. Their contact details seem to have been subtly altered: 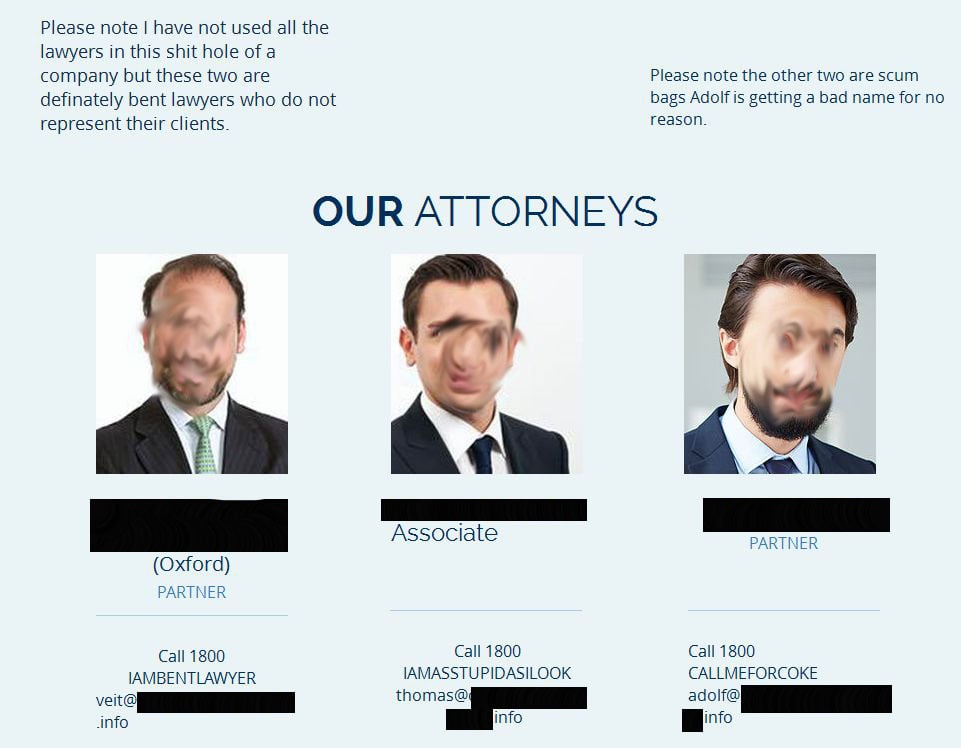 Prospective clients can also visit them in person at "500 The Scumbag Tower". There is no need for a map, just "follow the smell of shit".

Sherwood has clearly dedicated a considerable number of man hours to his green ink masterpiece, although he does at least have some good things to say about the firm:

Still better than Aston Carter.
73
Vote up!
71
Vote down!
So I guess he doesn't agree with the "Simply great to work with" that Chambers suggests...
68
Vote up!
76
Vote down!
This had me in stitches.
71
Vote up!
68
Vote down!
"Adolf is getting a bad name for no reason."
70
Vote up!
59
Vote down!
I love the c word
Sums up everything so succinctly
71
Vote up!
72
Vote down!
Hahahaha. This is funny. This Jonathan Sherwood is an absolute comedic genius!
55
Vote up!
64
Vote down!