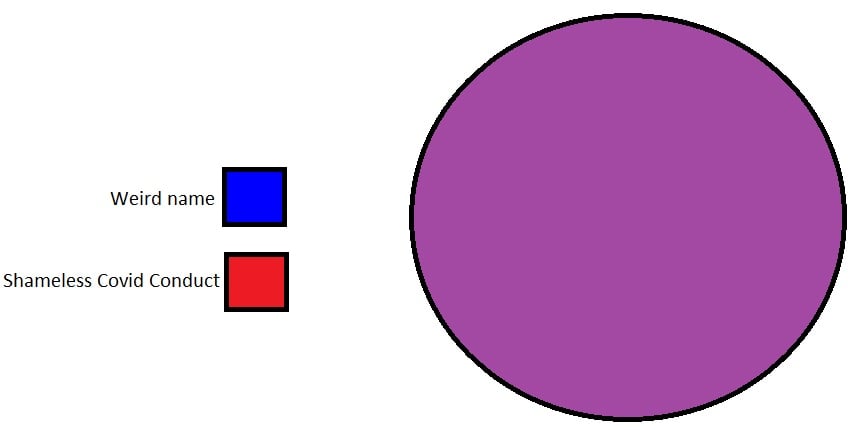 A Venn diagram illustrates the phenomenon.

The pandemic may have cost employees their jobs, but for partners at some firms the only downside of Covid has been having to admit in the company accounts how well they've done out of it.

Portsmouth firm Coffin Mew claimed £997,794 in Covid grants last year, its accounts show. Yet the million pound windfall was insufficient to stave off job losses, and Coffin Mew's headcount dropped from 182 to 134.

However, that was nothing compared to the turnaround engineered by the firm's highest-earning member, believed to be CEO Miles Brown. In the year Coffin Mew claimed a million pounds in aid and lost dozens of employees, its highest paid individual collected £319,000, an increase of £42,500 from the year before and the most ever paid to an individual in the history of the firm, according to its accounts.

A furious source told RollOnFriday that Coffin Mew was a "complete shit show" in 2020/21 and that it laid off approximately 50 people over Zoom in front of the rest of the department. Other staff were required to accept huge salary reductions in order to keep their jobs and told it was necessary to “keep the firm afloat”, said the source. When in fact it was to "keep the partners in the lifestyle to which they had become accustomed”, they claimed.

Coffin Mew isn't the only firm which hoovered up Covid grants while shedding staff and making record payouts to partners. Midlands firm Manby Bowdler also displayed a remarkable amount of chutzpah during the pandemic.

Despite the banner year for partners, there is no evidence either firm is paying back the cash they took to protect jobs that were not, in the end, saved.

RollOnFriday asked both firms how they used the Covid grants, how they justified keeping the cash while slashing jobs and hiking partner pay, and for an explanation of what some might say looks suspiciously like a rapacious cash grab at the expense of staff and taxpayers. Neither responded to requests for comment.

Well done Roll on Friday, keep naming and shaming the rich partners who took from the taxpayers.

I would be interested in a ceremonial top trumps card pack ranking these various firms on their levels of shadiness.

Extra points for those that publicly pretended to do a lot foe the local community and pretended to be ‘kind’ whilst all this was going on.

I'm really glad ROF is naming and shaming these firms. Keep up the good work!

Strikes me that for all this shadiness half of these partners would be better to offer themselves up as NQ’s at US firms?

MIght be worth looking at Slater and Gordon next

We’ll done ROF for shamming these law firms, people lost their jobs during the pandemic causing people crippling stress, paycuts or unemployment while they still took these grants and payrises.

Worked at Coffin Mee years ago for years.  This sh!t doesn't surprise me.  Couples at the top looking after themselves.

Small, previously unheard of family firm of little repute is run like personal fiefdom of chap running it. All amazed.

... and coming up, the news from where you are.

RadcliffesLeBrasseur did this (Venn diagram checks out). Furloughed virtually anyone possible for up to a year in some cases while then sending emails saying that financially everything was going well.

Loads of firms did it.  EMW furloughed loads of staff, remaining of us put a 4 day week (still expected to work full time and some) with 20% pay cut and others redundant.  Accounts show a bumper year for the partners.

Shameful behaviour by Miles Brown and all the partners who did not actively oppose this course of action. Unsurprising in my experience of Coffin Mew, which used to have a wonderful culture many years ago before it was destroyed by greed, narcissism and bullying.

Do people not get bored of these stories? People become partners to make serious cash. They don’t care about you or even their own team. If you haven’t worked this out then you are naive or stupid. If you don’t believe it then get a grip. It will never change. Happy Friday.

Harvey. That may well be true but there’s no harm in reminding people - especially when the firms in question have been massively supported by the taxpayer. And staff have been made redundant or forced to take pay cuts. And then have to listen to BS about how caring the firm is.

Profits declared in the accounts DO NOT EQUAL profits paid.

To any people still working at Coffin Mew - GET OUT!!! Yes being a lawyer is tough everywhere, that is a fact of life, but I can assure you there are some great firms out there where you can thrive.

Alright Miles, if you say so.

If not yet paid, the declared profits will have been added to the partners' capital accounts and will be paid out at some point in the future when cash flow allows or when a partner leaves the firm.

John B - maybe not but unless the business makes a loss in future years the profits will still be there and will be drawn out at some point.

Your staff are not as dim as you seem to think they are.

Oh how we laughed on those zoom calls when informed that redundancy was necessary to ensure funds were available for planned expenditure for the firm - jokingly the forthcoming Christmas party for those that would survive! Comfort I’m sure for those with positions identified as at risk on the call who would be mentally and financially scarred by the process!

For all those saying that lots of law firms did this, there are also plenty who did not. One of CM’s direct competitors not only repaid furlough monies to the government when it realised that it’s financial position was not as dire as it had first thought but also reimbursed its staff for the 20% reduction in salary so there are plenty of firms who can successfully balance partner interests and profits with fair remuneration for its employees and the employee retention figures then speak for themselves!

The level of shock I had to read this about Coffin Mew and Miles Brown was a big old 0.

Charity is it? Perhaps donate your furlough cash...

The furlough scheme was introduced to enable firms to maintain employment, and keep this country’s economy afloat at the start of the pandemic - it makes me sick to read of Fat Cats taking advantage.

Something wrong when one man and his Head of Communications can get this so wrong......check out how many partners have left since he arrived

Maybe Coffin Mew can change their name to P&O. Not a surprise at all though. Russian style media campaign to follow with all staff and clients having their media devices blocked I suspect

Head of communications?  That's a soap opera in itself.

Disgusting. They should be ashamed of themselves.

Miles promised me that this was all fine. I even made him pinky promise and everything.

There are at least 12 current vacancies at Coffin Mew (odd given the bulk firing on Zoom). If you’re struggling to get a job at McDonalds today might be the day to bung in your CV into Miles?

What I take from this is that the best-paid individual at Manby Bowdler can’t even afford a decent watch.

Great response to my comment. I am sure all these message boards will result in the partners feeling bad and paying the money back. As I said, it’s all about money, what the partners make, what you get paid and what the profits are. If you are in private practice and disagree then you are probably less than 5 years qualified and yet to see what it’s all about. If you want to work somewhere which isn’t all about profits go and work in-house.

They sound like a perfect “cultural fit” for Knights plc.

Harvey. Making profits based on taxpayer funded hand outs, interest free loans and an artificial market created by the Chancellor’s SDLT holiday doesn’t make you a brilliant businessman. I know that’s what lots of managing partners/CEOs tell us, but that doesn’t make it true.

What’s your position on benefits scroungers? Are they all financial wizards as well?

Having read ROF for a few years now, there are two issues I never see adequately explained.

The first is of course the moral compass, which seems increasingly erratic with increased organisational altitude. It is not as if partners go hungry to bed, yet the appetite for more, knows no boundaries, morally or legally.

The other are the names. While people are well educated and well read, it is nevertheless as if nobody had heard of nominal determinism. So, Coffin Mew? While it could be worse, such as "Coffin Maw", that is hardly any excuse. What were they thinking?

"Daddy, where did all the kittens go?"

"Nobody knows. Now keep on shovelling."

gosh Harvey - what a wise old head you are! thank you for keeping us grounded in reality…. pompous ass. not many have the rose tinted specs you think, doesn’t make any difference to the khuntishness of those behind this pretty little saga.

Look, if we are looking at this objectively, this what happens when one man surrounds himself with “yes men and women “ and members of his household and bullies out those who stand up to him. You end up with no objective sense of judgement and a group of people who are either inexperienced, ill qualified, or simply too frightened to stand up to bad ethics. Ill balanced power corrupts and we shouldn’t be surprised when ultimately it unravels.Up to staff , partners and clients whether they condone this or support it…….

This is only the half of it. Internally the firm rates its own soap opera

Yes benefit scrounges are wizards, good one Gary. The overall point is if the government, a firm or anyone offers something for nothing, people like you dreamers can’t start button bashing on message boards and complaining about how it’s wrong for people to take it. You really need to come to terms with the fact that the legal profession is about individuals making money. People will do whatever they can to make as much as they can. It is wrong but you will never change it so these threads every week achieve nothing xox